Reports of local tuna landings from footballs all the way to 700 pounders have flooded local newspapers and websites in the Southern Maine area. Last week there were some giants caught during the Bailey Island tournament and with the additional stoke coming from Mr. Lane’s stories of offshore domination, I was more than ready to skip out on work and head out when I got a call from a long time friend and tuna guru who had plans to fish on Tuesday. West winds 5-10 knots, seas 1-2ft., word.

It is still kinda early in the season and rumors were circulating about freakish numbers of dogfish getting into tuna and shark baits so we packed along a pretty solid arsenal of jigging equipment to cover the offshore spread. This turned out to be a lifesaver as we didn’t see any busting fish heading out to our coordinates (15 or so miles Southeast of Portland Harbor), trolling around the area, or heading back in the afternoon. Bird action was nonexistent too so we immediately set anchor on the side of the ledge in about 220 feet of water and started working the Sabiki Rigs for some live bait to run out at various depths on the shark and tuna sticks.

The first rig in the water bumped bottom and was up 2 minutes later with five footlong pollack. A few went in the livewell and the rest were hooked up and sent out in the chum slick along with a few chunks from the flat of herring.

Dogfish were on all the baits in probably less than 30 minutes and they didn’t fuck off once the entire day. Countless fluorocarbon leaders ruined, they ate most of the herring in the chunk slick, and they were even coming up from the bottom on diamond jigs. At no point during the day was it possible to let out a tuna or shark bait without hooking into a 2 foot finned turd in 5 minutes or less.

Good old fashioned ground fish jigging saved the trip. Once we started working the bottom with fly teasers rigged directly above a 12 ounce diamond jig (without bait), some good sized cod started coming up. 8 or 10 between 23 and 26 inches through the day and my best at 30 inches was the one fish we chose to keep and whose fate resided in a rather large batch of cod fritters. Though larger cod were hooked, this was the best that made it topside. 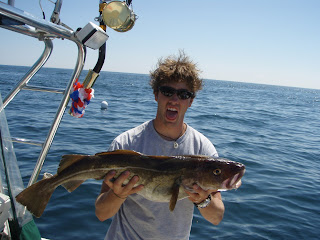 An interesting event that I forgot to mention earlier occurred when we were anchored up at around 1:30 under the cloudless sky when I noticed the water temp was reading an agreeable 69.4 degrees. I dove in off the bow and was out of the water in less than a minute. We hadn’t seen anything sizeable all day long but nevertheless, there was a heavy chumslick in the water, I was without my trusty speargun, and, as a surfer, I have an inherent fear of being ambushed from beneath. I must have shat when we saw the sounder was reading the only large mid depth level object (moving upwards) we had seen all day just seconds after I got back on board. Honest to god truth. I think that in keeping with BFC tradition, ample brew should suffice next time the heat picks up while shark fishing.

It’s still early in the season…
Posted by Morrell at 5:00 PM

Chris, glad to see that Poseidon is putting a few fish in the boat. Look forward to some future tuna stories

morrell, great story my man. i have never caught a dogfish nor a cod, but they seem like worthy species for a rod. i'm still hoping to join you on your vessell this summer. got your voicemail on sunday after i had been camping all weekend; let's catch up soon man.

Nice trip Chris. The dogfish have made giant fishing pretty tough down here too. We run all artificials for school tuna so don't have to deal with them much but the guys that giant fish with bait are having big problems. Even live bluefish off of kites are getting torn of by the f-ing dogs.