"The Edge." It refers to the edge of the continental shelf, an area highly revered amonst New England offshore fisherman. At The Edge, the gulf stream water, cobalt blue and 75 plus degrees, smacks into the greener inshore waters greating defined breaks i temperture and water clarity. Tropical gamefish such as yellowfin tuna, albacore, bigeye, and blue and white marlin patrol the edge, feeding on squid, skipjack and frigate mackeral. With the bermuda high pressure system providing calm waters through the week, it was time to for the edgewater to live up to its namesake. Canyon time baby.


Based on recent intel, the plan was to run to Fish Tails Canyon to fish a 75 to 80 degree temp break. Our buddy boat for the trip would be the Tuna Nut out of Great Pond, a 33 Hydrasports Center Console. Captain Alan from Chatham would come and would provide safety equipment including an epirb and a life raft. The boat was readied with close to 300 pounds of ice, multiple rods, ballyhoo, chunk bait, squid baits for swords, spinning rods, and basically anything one would need to tangle with gamefish of the tropics. We left the mouth of waquoit bay at 150PM for the run southwest past gay head and to the Tails.

From the corner of the vineyard, the run to the Tails is 87 miles and even at our 36 mph cruise it felt painfully long. We arrived at 515 and deployed our spread of ballyhoo behind islanders and small spreader bars. A call to the Tuna Nut was positive. They had boated a white marlin. Unfortunately they hadn't seen much in the way of tuna. We worked our way southwest along the canyon edge and into deeper water. From a distance, we saw a few yellowfin bust and vectored the boat in teir direction.


The yellowfin and the bluefin are far different creatured as far as feeding paterns are concerned. The bluefin feeds much like a dolphin. Schools of bluefin will keep baitpiled up and individula fish will take turns feeding. With yellowfins, feeding is a free for all. They absolutely pile onto a spread and as a result multiple hookups are quite common. Savy canyon fisherman keep the boat in gear following the intial round of hookups so that other fish have an opportunity to take the baits. We were trolling nine lines when we passed by the first school. 8 lines got hit, five stayed down. It was complete chaos and our crew of three could only do so much to handle the agressive and powerful yellofin. We were able to bring 3 to the boat between 25 and 60 pounds. A good start to the trip. 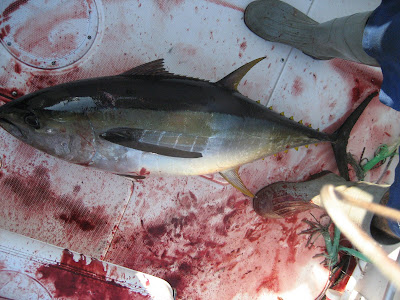 We vectored Tuna Nut to the south and he also got into the action. These flurrys of hookups were repeated for us three times that evening and we ended the night with a good clutch of yellowfin tuna in the fish box. Small yellowfin were released while tuna over 40 pounds were kept.

The decision was made to move north towards the head of the canyon and drift south through the mouth of the canyon overnight fishing for swords. We continued to troll north along the western canyon wall. It was just about complete darkness when the outrigger clips snapped and three rods in the spread went down. My initial thought was Bigeye, the monster tuna of the canyons that feeds only at dusk and dawn. As one of the tiagras continued to dump 400 yards of line, my suspicions were confirmed. We had at least one bigeye on the line.

The bigeye is a nocturnal tuna that feeds on squid. As the squid head up to the surface during the evening the bigeyes head up in pursuit. It is for this reason that bigeyes are most vulnerable to anglers at dusk.

One rod came unbuttoned so we were down to two fish. I fought my fish to the boat where my father gaffed it. This would turn out to be the largest yellowfin of the trip, a nice fat beast of 85 plus pounds. Unfortunately No picture would be taken that night as out attention turned to the other fish that was still taking line. We backed down on the fish, put the boat in nuetural and began to gain line back. Alan fought the fish from the rod hold and after about a half an hour, we were back onto the monfilament. The fish then sounded and the next fifteen minutes went by with little line gained. After 45 minutes of back and forth, suddenly slack. The hook had pulled. We were dissapointed but still thrilled that we had the opportunity to battle this creature. As Billy Joel says in "The Downeaster Alexa"- "There are giants out there in the canyons..." 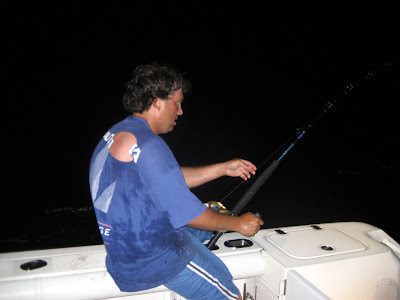 We settled in for the night drift. Two sword baits were deployed at roughly 200 and 300 feet down respectively. I chunked for a little while before giving up to enjoy the stillness of a canyon night. The sword baits were hit twice by inquisitive fish but not solid hookup came from either event. I ate a sandwich and read a copy of Big Game Fishing the Magazine while my dad and Alan slept. The night proved uneventful. 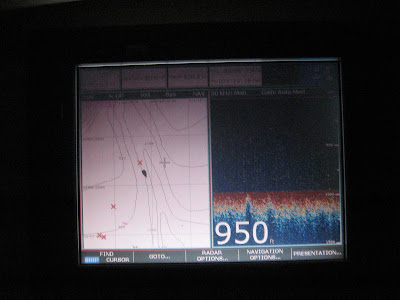 The morning troll took us back towards our yellowfin from the previous night and again these fish did not dissapoint. We boated another 6 fish before I elected to try something a little different. I rigged a ballyhoo onto my spinning rod and ran this bait off the flat line. Sure enough, it wasn't long before I was tight to a feisty yellowfin on the spinning gear. Unfortunately two crossed lines would end the fight early, but there was no lack of yellowfin action on this morning. 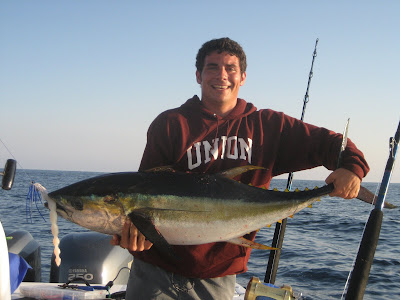 By about 730, we decided it might be appropriate to switch gears. We headed north to the highflier field just off the edge and onto the continental shelf. There we teased up mahi mahi using small baits and boatted several for the grill. I decided that since I happened to have a fly rod on board, I might as well hook one up on the long pole. The happy mahi were very agreeable to a fly rod presentation. 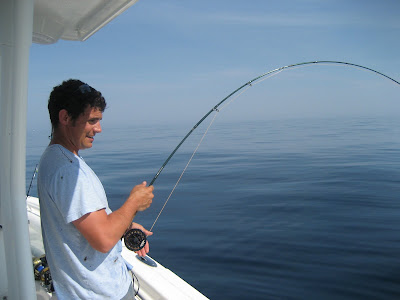 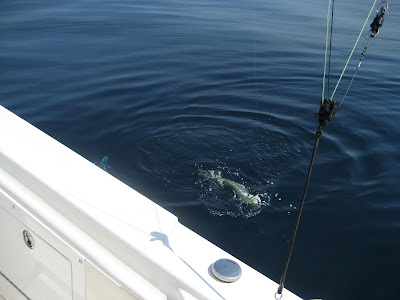 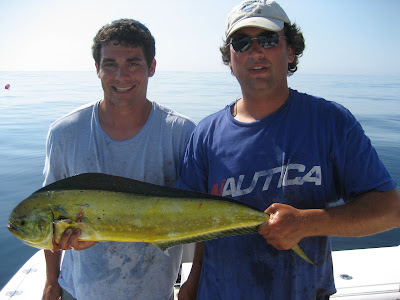 So in summary, a great intial canyon trip with 15 yellowfin landed, twice as many hooked, boat loads of mahi and a bigeye animal that was so close and yet so far. Now, I'm off to clean the boat... 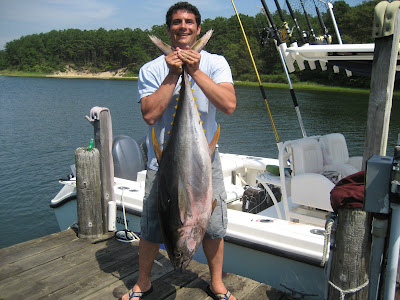 hell yea lane. very informative writing. what did that mahi take for a fly? i'd like one mahi fish sandwich upon arrival this evening.

pete and i are gonna fool around in the float tubes, see what we can get into.

this vivid account almost makes me feel like i am on blue water, not at a cubicle...almost

Lane, I am almost done w/ Ray's house.....when will we make this run together?

Next run will be in August as soon as I have flat weather on a weekend. Ideally take a sick day, leave mid day on Friday return mid day on Saturday and have a day to recover.

Yes Lane, the canyons sound sweet. I can't wait to try my hand out there on the deep blue... How bout something in September?

8 simultaneous yellowfin hookups...wow. Well done Keith, well done. NMFS legalized recreational spearfishing for yellowfin in the Atlantic last fall. I'd recommend trying your hand at it if you're at all interested. Its insane. In that super clear Gulf Stream water, its possible to pick out the grandaddy of the school.

Its just about that offshore time of year up here in Maine too. A 600pounder was hauled in last week off of Five Islands.

Spear fishing sounds sweet but there were enough tigers out there to make me weary of jumping in. I didn't see any but the fleet reported some bite offs boatside by some monsters.

When are we going to get you down to the cape? The gulf stream bite is just picking up and should be wide open all august.

The weekends of the 9th/10th, 16th/17th, or 23rd/24th are wide open for me in August. I'm definately there if you've got some room on the boat and that would be sick...stay in touch

Yeah not many things would keep me out of the water with yellowfin and mahi cruising everywhere but tiger sharks would definately be one of em.