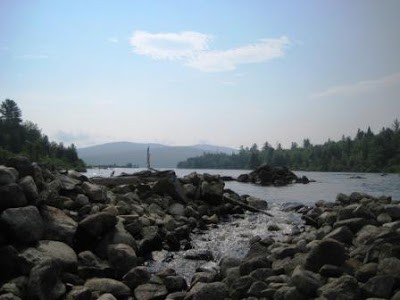 (Looking upstream from Lower Dam toward Pond in the River)

I had been on Prince Edward Island for a week, and while I had enjoyed my fill of sea run Brook Trout, I was yearning for the large Salmon and Bookies of Maine. The cottage that I've retreated to on PEI for the past 22 years remains sans TV, internet, & telephone. Cell reception is sketchy, and calls received or dialed from an american cellular device rack up rediculous roaming charges. By Wednesday July 9th I had had it with my lack of contact with the world, so I stole away to a ferry terminal to seek out some sort of internet service. I was greeted by a fairly modern (yet still dialup) computer system and I sat down to make fishing plans for my return stateside on Saturday night. It took a couple trips to the ferry terminal (which is conveniently near the liquour store) before Jesse and I had a plan in the works for the Sunday after my return.

Jesse arrived at my place in New Sharon on Saturday evening a few short hours after I docked the 4-runner into its spot in the driveway. I was amped for this trip as we had been treated well on the Rapid River during an '07 mid summer excurison when Sawyer had joined us. We enjoyed a big dinner, a few beers, and a 10p.m puff and we were off to bed.
The alarm greeted me at 4 a.m, after which I promptly greeted Robbins on his cot in the computer room. We were on the road by 4:40 a.m and despite a slight hangup on the 20 miles of dirt road into the river, we managed to be on the water by 7 ish.
First stop, Lower Dam. We mountain biked in a couple miles from the locked gate and promptly began the ritual. This area known as Lower Dam is the former site of a famously photographed dam and dam house. It is also the famous spot written about by Louise Dickenson Rich when she set off into the wilds of Maine to write We Took To the Woods in the 1800's. Her "winter house" as it is known, still sits along the banks of the Rapid River at this spot. 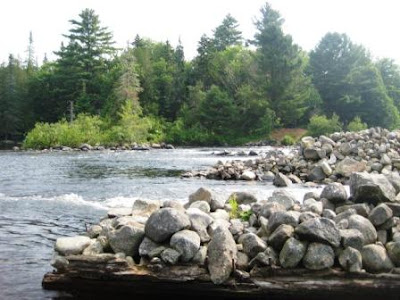 (The remains of the Lower Dam support structure)

We immediately began having strikes and it wasn't long until we had a few small salmon under our belts. I got the first frigged up fishing experience of the day out of the way when I snapped off a nice 16" salmon in heavy current. The fish continued to jump out of the water for the next ten minutes as it still had my sz. 10 Madame X in it's upper lip. Frustrated by this event, I joined Robbins on the lower side of the old dam and continued fishing.


It wasn't long before I snagged a smallmouth bass maybe 8" long and as I was stripping it in across the deep pool in front of me a very large fish (perhaps in the 22-24" range) rose toward the erratically swimming specimen....all I could think was that I had just seen the largest Brook Trout of my life. It retreated to the bottom slowly, leaving me wondering what in God's name it had been. I decided to keep the small fish on my line and drag it around in the pool (surely an illegal method on a fly fishing only river) but my curiosity was overwhelming. A minute or two of moving the small bass about in the pool brought on a strike from the large fish, at which point it very slowly, yet very strongly began taking line off my reel. As I yelled to Robbins and attempted to set the hook, the small bass was yanked from the mouth of the great beast. I was upset but understood that it would be nearly impossible to hook the larger fish with my hook already imbedded in the jaw of the smaller fish. As I tossed the bass on the shore (regulations in the river demand that you kill all bass at once because they were illegally introduced) I set my sights on the other fish of the river.

Moments later I had a small 10-12" Salmon on, stripping it across the same pool where I had experienced the last bit of debauchery. This time the large fish rose quickly smashing the small salmon and putting on a great run downriver. I yelled to Robbins again, what kind of dumb luck would possibly allow this hog to be on my line again. This time I let it run, giving my 5wt. large arbor a good workout and praying that somehow the hook in the salmon's mouth would find the lip of the larger fish. Suddenly the fish jumped, the salmon flew from it's mouth, and I could see that my hook had found a purchase on the larger fish. To my dismay it was a smallmouth bass, albeit the largest smallmouth I personally have ever experienced, probably 5lbs.+ and 22-24". As I battled the fish in close after having caught a few close looks at it in the water it managed to snag itself under a large object at the bottom of the pool in front of me, inevitably snapping my line. Needless to say it was one of the strangest hookups I'ver ever had, and even more bizarre that it occurred on one of the most renowned trout/salmon rivers in the northeast. After catching a few more small salmon we decided around 10:30 to move above Pond in the River and to fish a few notable runs that we had fished in '07.

We arrived at the inlet to Pond in the River to find two other guys fishing right where the river dumps into the Pond....a strange place to fish this time of year I thought, but it worked well for us as it wasn't where we wanted to fish anyway. A black beadhead bugger got the first nice Brookie on the line shortly after seeing the fish roll in the middle of the river, however, a few headshakes and the nice fish had thrown the hook....dismayed we pushed on as the rains began to fall. 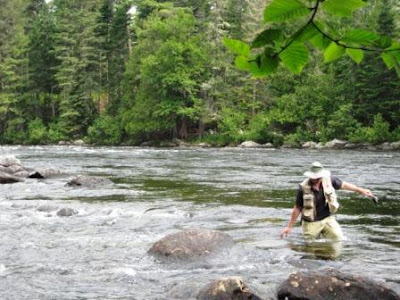 This same stretch of river in '07 had beat the shit out of us with driving cold rains and extreme lightening, today we would only receive heavy rain but on both outings it was the rain that got the fish fired up. Moments into the storm we landed a nice 16"brookie on another bugger. Though the bugger action was on, what intrigued both of us the most were the rising salmon that were slapping the surface on the far side of the river. Of course our limited back casting room was killing our distance and maybe one out of ten casts would find their mark in the best run on the far side of the river. Each one was greeted with a swirl or a half hearted strike. Multiple fly changes finally put a solid 18-19" salmon on the line after a frustrating hour or so of near misses. 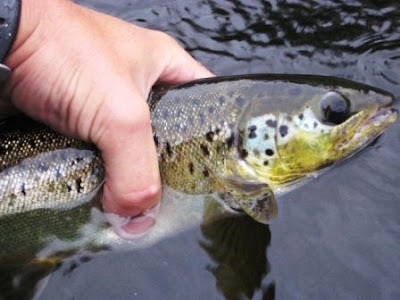 There is nothing easy about a trip to the Rapid River, from the bike ride in, the long haul from home, the often slow fishing, and the extremely intelligent fish who have seen plenty of flies, however it holds bruiser Brookies in the 5lb+ class, and salmon18"+ are common. This is a place that will continue to both frustrate and excite us, and its these very fish that will draw us back again and again over the years.

Posted by Andrew Wilkie at 5:32 PM

wilkie, you failed to mention the goose egg of fish that found their way into my net ha. maybe we should lug a canoe in there, shoot the rapids down to that run then put a 40 lb anchor down right in the middle of it so we can get those fish on the other side. or maybe get some spey rods.

Nice work Men. I have been to the rapid but never fished it. Awesome spot though.