On Saturday my father and I embarked on our annual father-son-somewhat-close-to-father's-day-fishing-excursion. We had been trying to get a day off during this week but due to travel our schedules hadn't worked out. I suggested that we go out on Saturday and although the house was rented, we made the decision to capitalize on the good weather window and head east of Chatham in pursuit of bluefin tuna.

As deascribed in my post from last week, the bluefin are in and the fishing has been steadily improving as wave after wave of bluefin tuna travel north along the continental shelf and turn up the shipping lanes migrating up into the gulf of Maine. This annual migration brings these fish east of Nantucket, then east of Chatham, past Race Point at P Town, along Stellwagen Bank, and finally north past Gloucester. Our plan was to intercept these fish east of chatham and hopefully bring one home for the grill.


At 230, we left our hotel and boarded the vessel lane. Planning to be safe, rather than sorry, I had filled 40 gallons into plasitc gas containers the night before to top us off before we vetured east. The process of filling the boat took a solid 40 minutes. We shot across Waquoit bay at 345, a little later than anticipated, but hopefully not too late to cash in on any early morning bite. NOAA had called for 5-10 knots in the sound increasing the further east travelled. This forecast proved to be a slight underestimate, but fortunately the 31 Edge ate up the mixed 2 foot seas in the sound. At 33 mph, we made decent time to Monomoy and prceeded east to the previous weekends numbers.


At about 200 feet, we were greated by whales and birds feeding. I elected to go lines in despite the fact that we were 8 miles east of our previous numbers. After about a half hour of trolling. I saw what I thought was a bluefish messing around with the 18 inch black bar. This fish would boil on the bar, dissapear, and then boil again, all the while looking very puny. Afted convincing myself that it was a small fish, the creature finally piling on and the drag of the Tiagra began to sing. Sure enough it was a tuna. I set up Jeff Lane on the rod. 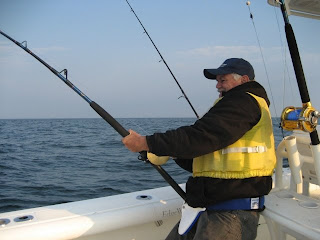 After a 20 minute battle during which father Lane got very animated and complained of many equipment failures that in my opinion never occurred, the fish was landed. It was suprisingly small, 46 inches and roughly 80 pounds. The only benefit to this small fish was that it allowed us to keep a larger one. This years regs allow a recreational boat to keep a fish between 27 and 47 inches, and a fish between 47 and 73 inches. The lines were redeployed and the vessel continued to hunt.


After pounding the area of the hookup with little additional interest, I pushed the vessel east towards our previous numbers. Well, there was a lot of life southeast of the BC buoy last weekend, but if the area was dead this weekened it wouldn't have suprised me in the least. But as it were, my instincts were correct. Upon arriving at the first of last week's waypoints, bird activity increased. Running up the line of waypoints to the east, I saw in the distance what can only be described as a totally epic bird pile. 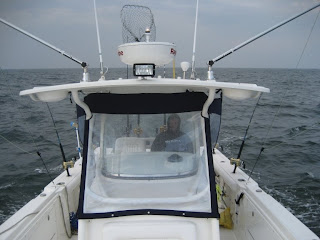 Thousands of sheerwaters, gulls and petrels fed over a massive slick. I turned the 31 Edge towards the madness and warned my father to be ready for a totally epic tuna blitz. As we entered the slick, the short pink bar went off in a frothing white explosion. This time I was on the reel, and in time a 54 inch fish was boated. 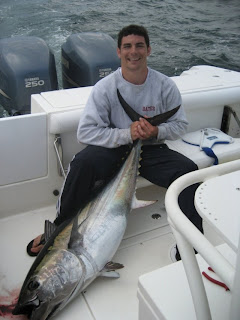 I wanted to clean the fish but there was no time. I cut it to bleed it and threw it in the fish box before quickly redeploying the lines. As we circled back towards the action, my father yelled that he could see tuna swimming in the water. I went towards the bow to have a look but as I did an outrigger popper and the drag on a tiagra began to wail.

For a moment, my father and I argued over who had to reel in this fish. I was tired after just reeling one in and my dad was still beat from his fish 45 minutes earlier. The solution came in the form of a second explosion and singing drag. We were doubled up, this time both black bars in the spread were anialated. I told my dad to reel in one of the remaining lines right away before the situation got out of hand.

The next 30 minutes were sheer chaos as the two of us reeled in and released two identical 110 pound fish. The difficulty in controlling these fish boatside cannot be overstated. In the end, both fish were released safetly, but my hands, and shoulders did not escape in such good condition. Over my shoulder, the blitz continued. I told my dad that it was up to him if he wanted to continue fishing. There fish were there to be caught but the fish box was full. We had our limit. It was almost 9AM. With that, old man Lane said he was good to go home. Before we leave, I told him, I want to try one thing...

These tuna had been feeding under the water, forcing bait to the surface but not breaking. They were not busting up top as many epic blitzes occur. Nonetheless, I wanted to see if one of these fish would come up and take an offerring on the surface, and with that I rigged up the spinning rod. The 65 pound braid on the Shimano Thunnus was tied to a barrel swivel followed by a 3 foot length of 60 pound fluorocarbon. To the end I tied a 3 once pogy pattern popper. Approaching the slick, I let the popper sail.

I would like to say that there was a challenging technique that I had to master to get a bite. The reality is that I retrieved this popper for less than three seconds before a beast bleufin piled on in a spray of whitewater and took me for the ride of my life. 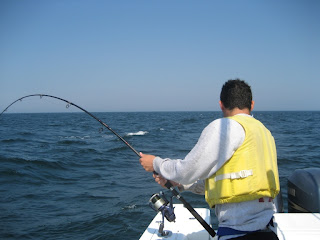 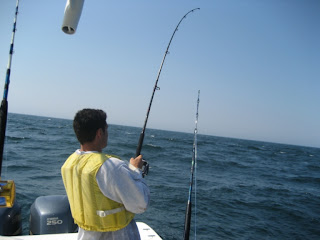 After roughly 30 minutes of blistering runs and deep battles, I had the tuna tired. Bringing it towards the boat, we now had the issue of how to release it. I wanted a picture of my first spin caught tuna, so we decided to tial rope the fish rather than risk a lip gaff, bring it on board, photo and release. 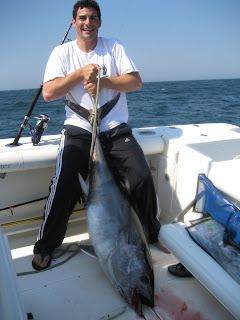 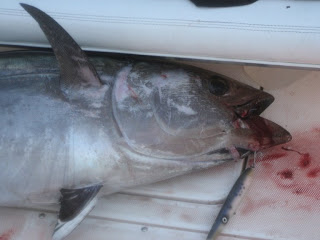 The fish was sent home after some amatuer photography, and following its release we returned home as well. The fish were still feeding when we left, but I'm not concerned. I'll be back there soon. Maybe next time I'll have a 15 weight fly rod with me.
Posted by Keith at 11:05 PM

dude that is an epic morning. can't wait to get back down aboard the lane train.

i'll investigate the availability of 14 - 15 weight fly rods in the employee use room. i want fresh tuna steak all up in my grill

Sweet Jesus I am jealous