Tarpon - Out of Port Charlotte Florida

The captain was sporting a sun faded Nantucket red cap and a slick pair of wrap around shades with Croakies attached. His light blue, long sleeved Columbia sportswear shirt with the breathable back flap, slapped ever so slightly against his perfectly tattered shorts. My confidence increasingly deflated with each peppy bound he took up the dock towards us. It was 8:00 am and he was clearly ready to catch some fish.

I looked to my right to see if I could catch the expression of the 2 other virgin big game fisherman next to me. Parker was still coating his neck with layers of sunscreen, almost as if he was hoping he could wipe away the damage done the day before. Nelligan was still missing, and as I glanced behind me I saw that he was in the car fumbling with his seat belt. My father, the professional retiree, limped towards the gentlemen coming up the dock being careful not to put pressure on his newly injured foot. Sadly he would not be joining us, but I believe he was somehow more excited than any of the young souls he was going to set loose on the open water that morning. At least, he was putting us in good hands. The young captain approached us with an air of confidence and a very upbeat personality to match my dad’s.

Before I knew it we had all shaken hands and the stories and jokes had begun. It was almost a proverbial tribal ritual. The elder chief was sending off the young green tribesmen with the villages’ best hunter. Young and green we certainly were.

We walked down towards the boat and saw the 18 foot center consol flat bottom with the 250 horsepower engine and thought, “Are you serious? How were we going to haul in a 100 pound fish in this thing?” However, the boat looked official, complete with a sponsorship wrap around the hull. We certainly weren’t getting any more confident with our big game skills. Regardless, we shrugged our shoulders and got on board with a quick hop off the dock, having no idea where we were headed.

Nelligan and Parker stood in back behind the captain, who was now slurping on a Big Gulp Diet Pepsi and packing a nice fat lip as we puttered out of the marina. I sat in front to even out the weight. We began casual conversation, and were immediately relieved when he started on his stories about taking out some rookie businessmen on a trip a couple of weeks ago. However, as the story developed, it ended with an explanation of how a shark came right up along side the boat to completely devour a Tarpon that had been reeled close. I looked at Parker’s face and knew he was becoming a little worried. Considering his last fishing experience included breaking Nelligan’s dad’s fishing rod on trip 3 years ago. I also noticed that for the past 15 minutes this guy had been telling the story with a dip in his mouth, without spitting once.

Just then Cap laid on the throttle and off we went like a rocket. The cool breeze was a welcome feeling because even at 9 am the sun was already pounding our skin. We banged our way from the marina, to where I couldn’t see any land behind us. In front of us you could just make out a school of boats dancing along the horizon. It was clear that this was our final destination. We stopped just before, to set up our gear and go over the strategy for when you hook one of these suckers.

“Once you get a fish on”, said the Captain “you have to start reeling as fast as you can. Then when they jump, you have to bow down to the fish to keep the tension on the line.” That was it. Then he said, “So take a piss now if you have to cause you’re not going to have a chance when you get in there.” We relieved ourselves and off went to join the pack, which looked like a game of bumper boats out on the ocean.

The objective was simple. Find the school of fish, get to the back of them, drop a line and drift through them. Then circle back around; except there were probably about 50 boats doing the same thing all within a couple of feet of one another. All of a sudden fish started flying through the air. These hundred pound fish were on lines all around us jumping out of the water, some even landing on the backs of the boats next to them. It was shear madness, and we were eager to join the action.

“They don’t bite hard”, said the cap, “so reel on anything.” We did exactly that, and before long I felt a soft, slight pull on my line and I cranked. The next thing I knew the tip of my rod was dipping into the water and I could feel the weight of the fish.

Only a few minutes in and a fish was on! This was going to be an interesting day. I was already in the fighting chair at the front of the boat so I just reeled like I knew how. I threw my weight back to grab some slack and leaned in as I cranked the rod. I was filled with excitement and my initial motions were jerky, but I started to gain a rhythm. Lean, rock and reel. Then all of a sudden I felt the tension release and someone yell,

I realized the thing had gone airborne on me and I needed to bow, but before I knew it the fish had landed and as I reeled the tension was gone. I brought the line in and heard the click of the leader hitting the rod tip. It was over and there was no fish to show for it. 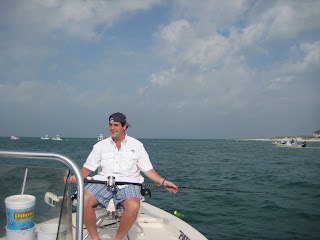 However, we got right back into the chase, and joined the ebb and flow of the trolling boats. We figured with a fish on in a matter of minutes the day had just begun. Sadly we were mistaken. It turned out that it was the most excitement we were going to get that morning, and all we would be left to show for it was a sunburn. 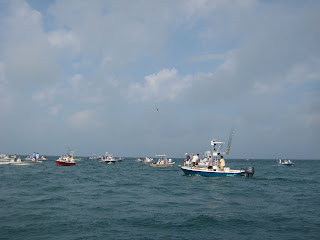 When we cruised back in we took a slight detour through a maze of old mangroves. We ripped through there on the flat water going as fast as that 250 horsepower engine would take us. While we were cruising at a really good clip, it still was a soothing ride that gave us a chance to reflect on a fantastic day. The excitement around us had been incredible, and we saw a couple of long battles and some real big fish. We had some good laughs, some good conversation, and got our first and certainly not last experience with big game fishing. 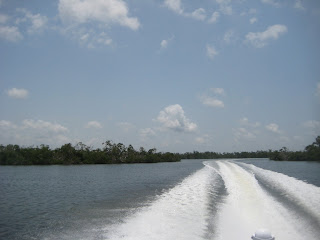