Fishing with Dre and Tupac

Greetings from California. Many of you do not know me as I am one of the few members of this blog who doesn't hold a degree from Bates College. However, I did attend high school with a one Keith Lane and have been assimilated into your club over the years through heroic sea voyages for bass and tuna, as well as many expeditions north to fish with The Great Mainer, Andrew Wilkie. After four years as a mainstay on the Vessel Lane and Territory Wilkie, I pulled pegs and headed to California to try my hand in the west. Before Lane or anyone else calls me out, yes, there was a woman involved as well. We all make choices, I guess. Anyway, I've been meaning to add to this blog for quite some time so here is a somewhat belated post. The following took place last winter.

I arrived last October and instead of searching for a job (I had none- yet have found one since) or an apartment (I was living in my girlfriend's uncle's basement- now in San Fran in our own apartment), I set out fishing- like any man would really. My uncle has lived here for quite some time and is a pretty avid fly fisherman. Actually, he was the first person to put a fly rod in my hand- a 5 weight, Berkeley which I think was made of fiberglass and had a reel made of iron. Anyway, he set us up with a guide to float us down the Klamath river up north.

The Klamath, like most of California's rivers is regulated by a damn which is where we put in. If flows through pastures and small valleys until eventually it pours out in the Pacific, just south of Oregon. It and the Trinity are widely considered two of the best steelhead rivers in the West.

One major prop that i have to give to California fishing is that the fish are respectful of man's sleeping patterns and keep mostly bankers hours during the winter. I don't know why this is but ever guide and experienced fisherman I've talked to has said this is the case. No reason to bang it out at 5 AM. Anyway, the day of fishing was pretty sweet. I managed to land my first steelhead which was a nice "half-pounder" as they're called. 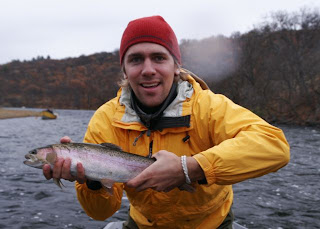 The undisputed highlight of the day though was when my uncle was standing in knee deep riffle water preparing to re-roll cast into the faster water in front of him. As he cast, his fly stayed in the water, clinging to what he thought was the bottom. After a solid tug to dislodge his stuck fly, the bottom swam away. At first the fish made slow runs and we couldn't really see it but as Lee coaxed him towards shallow water, the beast went apeshit and bolted across the river, exposing a tail about as big as my hand and splashing water everywhere. The guide grabbed the net, waiting to capture what he was calling a 15 pound salmon.

Catching a salmon at this time of the year is not really very heroic, even at 15 pounds. They are all just focused on boning out and then dying so if you do lay into one, not only are you f-ing up Mother Natures' plans, but you're probably foul hooked anyway.

So Lee continued to fight the fish in the water around us for long enough that the guide was able to polish off two cigarettes. Finally, just as we had him in close, the fish made one last downstream run, caught the fast current and in about 5 seconds, Lee was probably 50 yards deep in his backing (this happened just before the attached picture).

Now the guide told us all to get back in the boat because we had to chase the thing. It had swam to the next pool which was nice quiet water and was dancing around but there was no way we were going to bring it back up current, so we had to go to it. And we did, as Lee masterfully played the fish from, at this point, about 150 yards away. The fact that the hook, which was barbless, actually stayed in through all that, blows my mind. It had to have been either in solid bone or deeply swallowed.

So we get down to the lower pool as Lee is feverishly reeling to make up lost ground on his line. Finally we get the thing into sight and realize that its a f-ing STEELHEAD, not a salmon! The guide almost shat his pants and shrieked like a little girl.

Now the last part was getting the leviathon into the boat. The guide only had a shallow catch and release net with a 20' opening (this fish was an easy 28, if not 30) but dipped it into the water to try and spoon the fish into the boat. As he did this, the steelhead made one last run, ran the line over the net and fucking snapped the 2X tippet. Game over. Dunzo.

The guide sat back in his chair, put his head between his knees and just said "holyshit" over and over for probably a minute. He was like Rainman. Once he regained his composure, he said in the 20 years he'd fished the Klamath, it was top three biggest steelhead he'd ever seen on the river.

We concluded the day with a few frosty beverages and headed home. Still a good day none-the-less.

Its been too long since I've heard from you my good man. Sweet story, and great western pics....loved it. Hope all things are well with you buddy.

caleb, great story man. i hope to get back to sf this year, maybe for new years, i'll let you know. if i do get my shit together and get there, we should get into some trout. maybe tahoe area?