The eve of April 1st had come, and due to unchangeable work forces (a questionably important "seminar"), my only chance at getting to the water was before work. I had the expedition planned such that I would arrive at the Royal, which lies between home and work, with enough time to put in an honest effort, given the circumstances.

Perhaps not surprisingly, I awoke several times during the night; shortly after I fell asleep, at 1:00, at 3:30 and then finally the alarm sounded at 5:00 am. A quick look outside the window showed the only light as that from several street lights. An online investigation of the actual sunrise (perhaps more appropriately checked the night before) told me that it would come up at 6:22 am. I fell victim to the Snooze button once again several times and finally climbed out of bed sometime just before 6:00. My gear and attire was placed on my bedroom floor with care and after a quick shower, teeth brushed, contacts in, I was out the door.

Birds chirped even though the sky was overcast and I cursed as it was much lighter than I had hoped it would be when I arrived at the river. I turned off the car, turned up the Robert Earl Keen and got into the appropriate accouterments for the short expedition into the raging, winter river. As I suited up, cars passed and though I did not look at their faces, I knew the drivers were looking to see what on earth I was doing. I did get a couple beeps from some passer-bys and I raised an arm in response. 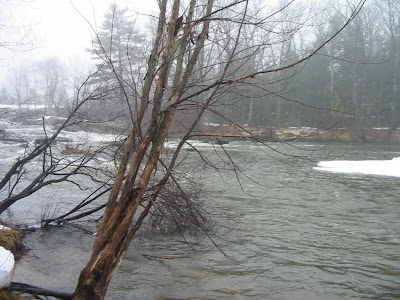 I cannot remember the last time I have actually caught a fish on opening day, but I distinctly remember fishing on April 1st for the previous 5 or so years. The air feels different on Opening Day; something distinctly different from the winter air of March 31st and the days before. For all I'm concerned, Opening Day is the beginning of Spring and I can't think of a better way to start the day, or the season, than on the water. In fact, the air was warm enough that I felt comfortable in a base layer of some Patagucci tech and a t-shirt.

In all reality, catching fish on April 1st is probably just as difficult as doing so on March 31st, but even so, "fishing season" means fishing and fish, so there I was. I had my doubts that any fish in the literal ice-water would be active enough to chase a bugger or streamer, so I tied on my go-to nymphing rig, a bead-head bugger with a copper john dropper behind it. I floated some runs here and there, at spots I had fished last year, with no luck and nothing even close to a sign of anything piscatorial.

When I made the first time-check, I was very happy to see that I had another 45 minutes of freedom, so I reeled in and changed spots. I took a short walk through some snow and bushes to a spot I had never been to before. The water was rushing over a couple hundred or so yards of downhill rocks and then into a large pool, split by a large piece of ice, which created two fishable runs; one that I could get to easily and one that would later prove to be unreachable. I was able to knee into a good position for roll casting and got some real nice drifts into a section of the river where the flow slowed.

I roll casted and dead drifted for 20 minutes or so, watching my line as it passed me and then began to drag, then I would make short strips until I was able to roll cast again. On one such cast, my drift had begun to drag, so I began my strips. All of a sudden there was another force at the end of my line and a quick set confirmed the solid hookup. I was in disbelief at first: one, that I could have a fish on and two, that the fish would've taken a swinging, quickly moving fly. I saw the flash of a fish and that was all the evidence I needed.

The fish took some line and I was careful to not let the fish get me into the trees just below, nor under the massive ice shelf below that. A short fight and the fish was in my net, a beautiful brown trout. First fish of the day, first of the year, first on the new rod, first from this river for me and my day was made.

It's going to be a great season... 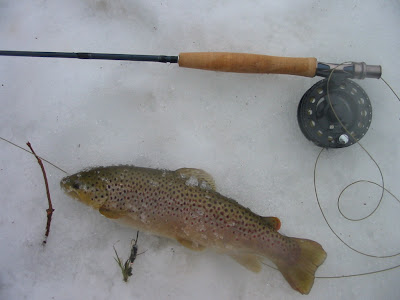