The promise of a night of debauchery and a day of fishing afterwards is usually enough to convince Wilkie to trek to Portland. With a night of sufficient amounts of intoxicants behind us, we awoke on Sunday with cobwebbed brains, but we were able to get our shit together and get out of the apartment around 10:00 am nonetheless.

A quick jaunt out of Portland put Wilkie, Pete, SoPo native Pat and me at a spot that the beloved Gazeteer had shown us, and soon we were rigged up and on the river. Steep banks and deep snow made fishing difficult at first but we found high ground and followed it to a huge eddy where the channel we had been fishing emptied into. 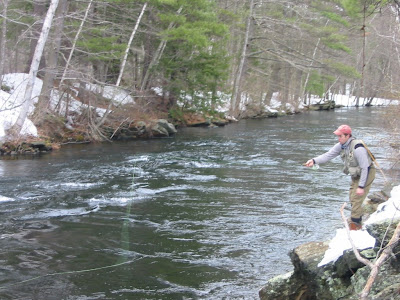 The eddy was very big and was actually quite wadeable for the water level. Between the four of us, I bet 20 different flies touched the water, but none of us were able to achieve a solid hookup. A small run heading out of the eddy was fished hard as well. We all agreed that some type of hatch would make the spot boil with rises, but the presence of fish might be necessary for that to happen as well.

So, we made another stop further up the river. There were several runs to drift and strip through, and we did, though our confidence was probably compromised at this point, as the hangovers set in. No fish found at this spot either, so we called it a day and took off, in search of greasy pizza and refreshing beverages.

Mental note: go back to the first spot later in the season. 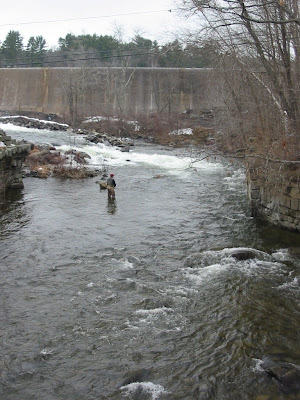 Fine overcast morning on the water. Mental note #2: check regs on this stretch of river such that we're convinced its not too "bassy". I'll plan on another weekend outing again soon.