When your college 'fishing dude' and close buddy is on the opposite coast of the US, its tough for all the obvious reasons.....After keeping in touch with Tyler over the past few years via phone calls, emails, and texts, we both came to the realization that a fishing trip just simply had to be planned...and so we delivered!

Had the pleasure of bringing Tyler to the southern coast of Georgia, a place that I've been blessed to have grown up fishing since I was a kid, where the culmination of the St Mary's River and the Atlantic Ocean creates a thriving nutrient-rich ecosystem. With freshwater and saltwater mixing, water-clarity is a constant challenge to the fishing. You hope for the incoming ocean tide to bring in green and clear water, but the flow of the St. Mary's River, heavy rains, and all combined with muddy sediment along the intercoastal seafloor can impact the conditions. But it is what it is and we fished hard thru it, havin a great time as always...

Year-round species down there include speckled seatrout, red drum, whiting, sharks, but in the summer months there is a lot of the bigger gamefish and pelagic species that voyage north from Florida following the massive bait schools of mullet and menhaden. As Tyler witnessed on a couple days, all-out chaos can ensue on these bait pods. Jacks, Bull Reds, Tarpon, Sharks and other miscellaneous gamefish are predating on these bait pods. We even saw multiple King Mackerel sky-rocket 10 feet in the air through a Pogy school. These were big kings too - upwards of 30-40 lbs. I'd never seen them be within a few hundred yards from shore.

Our trip in mid-August was planned with the mentality of giving us the best possible shot at an apex summer predator; the mighty Tarpon. August brought fast-moving tropical storms that were totally unpredictable and swiftly snuck up on us during our expeditions. We fished hard through the day and night. Had multiple shots at Tarpon, but couldn't get one to take. That said, we got into a variety of fish with a multitude of tactics, see below for some visuals! 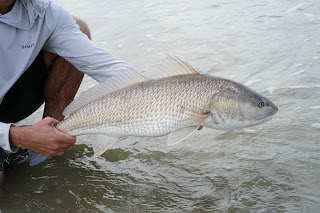 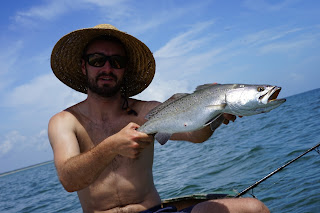 Tyler with a nice seatrout 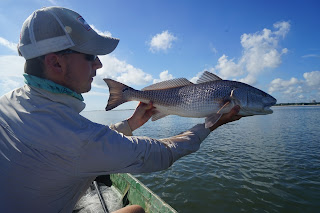 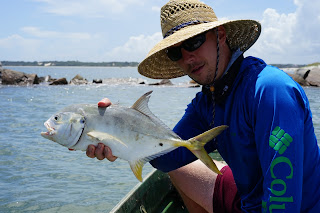 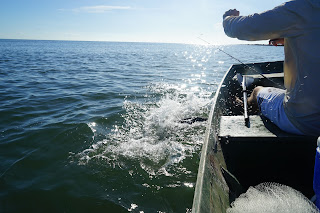 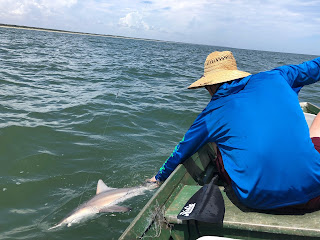 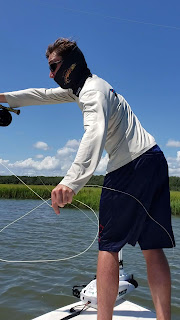 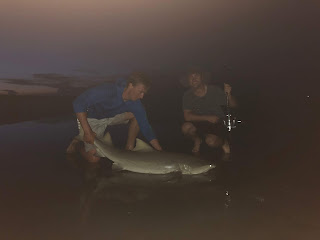 Notable quotes / memories that gave us a chuckle:

"You high-holin' me right now?"

Tyler's "pocket tacklebox"... Whenever we needed tackle, like a magician pulling a rabbit out of a hat, Tyler kept pulling out the exact tackle we needed out of his pocket.


I know its an effort to get down there, but glad you got to experience that diverse fishing spot. Awesome time!....Let's plan another trip soon!

A nice variety of species there boys - well done!

Great trip men. Someday, when I'm done having kids, I'll make it down there...

When I started fishing for freshwater tarpon I would use small patch crabs and would drift them right in front of tarpon and they would not seem interested.