Hello BFC people. I am going to try to make this brief since I am not much of a wordsmith, but thought I'd provide some backstory so things made some more sense. This summer was a little bit different. I decided to quit my job at the beginning of June with the goal of taking the summer off and figuring some stuff out. While nothing was really figured, I did manage to enjoy my time off with plenty of fishing, hiking and birding around Washington.
I thought a good end cap to the work hiatus would be a bigger trip, so I decided to go to New Zealand, a place the BFC has become reasonably familiar with. I first went to New Zealand in 2007 for my Bates Study Abroad program, and have been itching to get back ever since.

I told my dad what I was up to, and he mentioned that he might want to join. I blew this off with a "yea right." I got my tickets and emailed the itinerary to him, and to my surprise he booked his flights that afternoon. The plan was that I would go for the first half by myself and then would pick him up and we would travel around the second half and fly back together.
Now to the fishing. As Jesse's post alluded to, the scenery was beautiful, and the fishing was tough. In all honesty, I wasn't putting in 8 hour days and I wasn't fishing everyday. At the end of the trip I fished 8 days, some of which were only for a few hours. I have no excuses for the lack of fish caught.

I was looking forward to a day of fishing with my dad and Stu, a guide we had booked when planning that leg of the trip. Eager to learn what I had been doing wrong while fishing on my own and excited to see some more clear water.

The day finally came, we met up with Stu and hatched a plan for the day. It was blowing wind, so for the first half of the day, we would fish a river, and the second half we would fish a lake. I am not sure whether my dad would consider himself a fisherman. He goes fishing with me 1-2 times a year. Usually one of these times is with Jesse and I for a Winter Steelhead mission. My dad doesn't practice casting (although I give him a rod during the summer so he could); instead he chooses to do a lot of visualization. Visualization wasn't quite going to cut it in the wind, so for the morning I just fished the river.

After having my own issues with getting my cast to straighten out in the head-on wind, and blowing opportunities on 3 of the biggest fish I'd ever seen, I finally put a moderately good cast out there. The fish turned and followed the fly all the way into my rod tip. Can you guess the fly? Yep, a worm variation, of course! This happened one more time and I didn't get the hook set on either. I think I was too busy watching the leviathans cruise straight at me. And then I was too slow when the "set" call came from Stu. In hind-sight, I should have made the casts a bit longer, then the fish could have just ate it rather than following, but it was wild to see that reaction to even a misplaced cast.

Finally I made good cast with a good drift and the right fly, and lo and behold the fish ate, was fought and was landed. Weird how that happens.
After some handshakes and some laughing, we fished a few more pools, then decided to go have lunch and fish a lake where my dad could get some casts in and have a chance at some fish of his own. It was a beautifully setting and turned out to be some good fishing.
The wind made sight fishing for cruising fish pretty difficult, so we ended up just fishing some drop offs blind. My dad had a few follows and I managed to land a few rainbows. 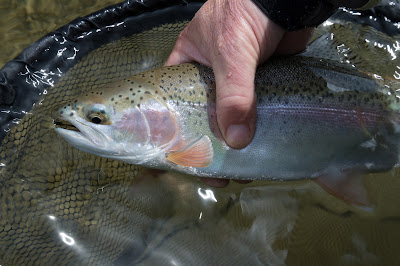 The day came to an end and a good time was had. It was a special experience getting to share this day with my dad, and one I will not soon forget. He has been there for my first and only Steelhead and my first and only NZ Brown, so that is pretty awesome. 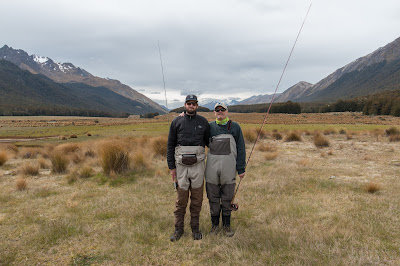 After returning stateside and enjoying a Thanksgiving feast, I hopped in my truck and drove from Seattle to New Jersey. Time to do some more figuring. Thanks for reading and I hope all is well.
Posted by Halsch at 1:35 PM

Hey Big Dog! Awesome report and pics! That is pretty rad having your Dad there. You should take him on all your fishing trips!

Welcome back to the USA! hope to see ya soon!

Nice brown buddy! Sounds like a solid day on the water!

Thanks Jesse and Keith!

Some fine country out there Halsch. Good on ya for gettin back out there to NZ! Congrats on a successful trip!