I was in Cataumet, visiting my girlfriend at her Cape house on a Friday, when I sent Keith a text about possibly meeting up for a beer. I hadn’t seen Keith since my freshmen year, when we were fishing the Dead River with Wilkie. I received a text back saying, “Want to go tuna fishing with us tomorrow?” … Yes. Absolutely I wanted to go tuna fishing tomorrow. After confirming logistics with Keith, the plan was for me to drive over to the Falmouth Inn for a 2:30am group departure the next morning. As strange as that sounded over the phone, I didn't question it.

My story starts at 1:30am, when I awoke to the snoring of my roommate. It seemed like I had just briefly shut my eyes before this human alarm clock had decided to go off. I had no choice but to get out of bed. Running on minimal sleep, I got my shit together and took my business to the Falmouth Inn.

I got to the Falmouth Inn. It’s 2:15am and I wasn’t supposed to meet the guys until 2:30, so I had some time to kill. I drove down the Inn’s weirdly large parking lot and found a spot in this back corner. In my head, I thought: I have valuables in my car (laptop, fly rod, and other expensive gear) and I should park my car in a DL spot. I then proceeded to enter this rundown hotel, and immediately helped myself to the complimentary coffee that was already brewing. No matter what I put into this coffee as to dilute the shit taste, it still went down like straight diesel. The shit coffee was the least of my worries as I found myself in a staring contest with the nocturnal owl working the night shift at the hotel. I checked my watch; it was now 2:30am and no signs of BFC life at this hotel. I was also careful not to make any sudden movements as I walked back out of the hotel lobby. It’s 2:35. Now I’m really getting a weird vibe. I go back outside to my car in the parking lot with hopes of finding the dudes. I overhear some laughter and look over to see three guys rummaging through the trunk of a car, with cigarette smoke looming above them. I walk over from my car, which was located in the darkest area of the lot, to greet these guys. In the dead of night, one seems to forget basic social skills. I walked up behind them and said, “Yo, Keith?” … Keith, Clark and Mike all jumped out of their skin and Keith let out a nice cuss. “What are you smoking crack back there? Jesus Christ!” Needless to say it was a funny way to meet, especially in the back parking lot of the Falmouth Inn.

We piled into Keith’s car, drove a couple miles to his parent’s cape house and met up with his other fishing buddy, John. The five of us, eager to get offshore, hopped aboard Keith’s 31’ Edgewater. Off we went.

It was definitely a weird feeling heading out to open ocean in the dead of night. The colors on the horizon, just before sunrise, were simply astonishing. 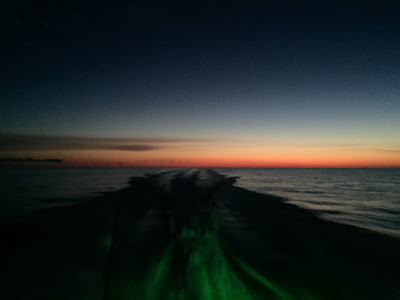 The weather was good too, with minimal wind coming out of the east and not too big of an oceanic swell. Once we got out of sight of Martha’s Vineyard, the Edgewater was in and out of pea-soup fog. We couldn’t see further than a couple hundred feet around us at times. 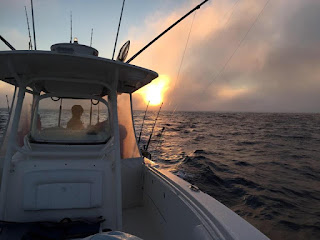 Our delightful cruise to the fishing grounds was suddenly interrupted by the chaotic splashes of powerful marine mammals, b-lining straight towards the boat. It was a large pod of dolphin and they were dialed in on some species of baitfish. As the boat came over the dolphin, the dolphin’s line of swimming instantly changed direction and joined our route, hugging the bow of the boat. Keith, thinking that this was a good indication of tuna, made the executive decision to put out the squid bars and ballyhoo to troll. I’m not sure of our exact coordinates at this time, but we began trolling between the Claw and the Dump, two prolific ledges that football Bluefin tuna patrol this time of year. Eager to spot bird activity or any other signs of aquatic life, I positioned myself on the bow with my feet hanging on either side of the anchor. It didn’t take long until our bait spread brought up a hungry, aquatic beast. A sizeable thresher shark caught up to the trolling squid bar, erratically showing off its whip-like tail through the spread. We couldn’t get her to bite, but the sighting was worth noting and a great start to our day. 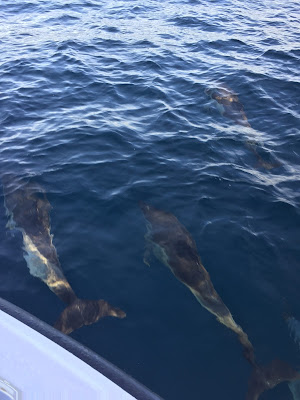 We got our first tuna bite, not too long after the shark siting, and close to the feeding pod of dolphin. 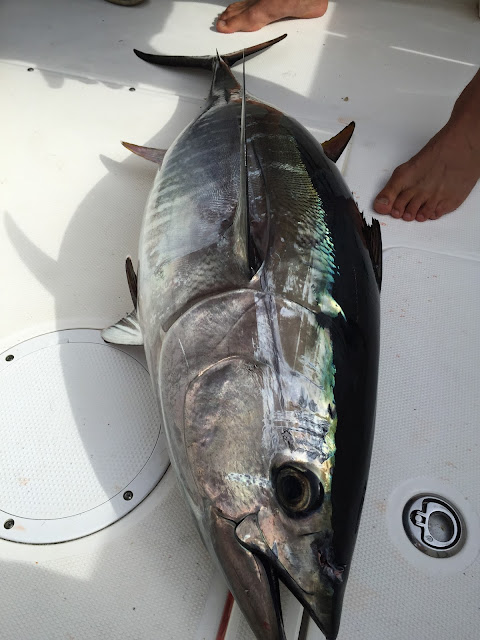 Throughout the day, we trolled and hooked up every hour or so. We picked up a fish behind the dolphins or around an abundance of bait showing on the depth finder, anywhere from 50-100ft.

Struggling to hold up this 50 lb bluefin. 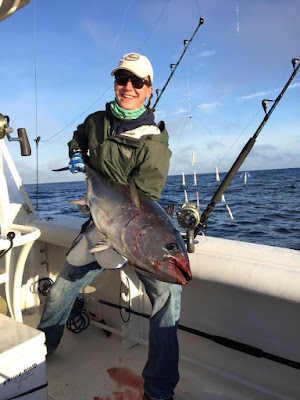 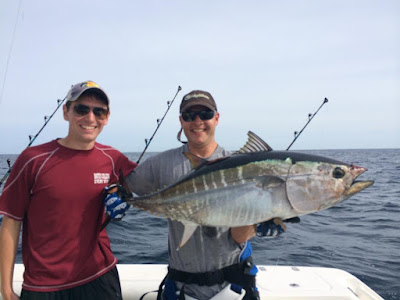 Keith with the release. 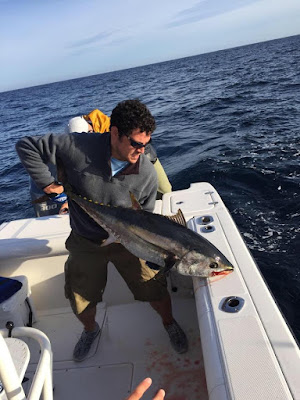 Let it be known that we landed 4 Bluefin throughout our morning, while almost every other boat on the water was complaining over the radio about a lack of action - maybe getting tight once.

There was a funny moment throughout the day of trolling, when Clark decided to get out a kite rig. What began as an innovative and fun idea to try something different and to switch things up, quickly turned into a mess of tangled lines. The kite would catch some wind and go up, but then it would tumble down in a whirlwind of a mess. Pictured below is Clark with his kite. 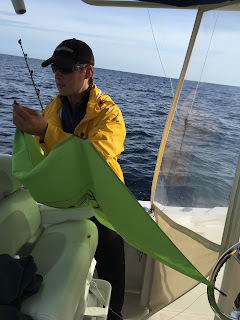 On our trip back, I crashed hard on one of those bean-bag chairs. Those things are so comfortable, holy shit. If you remember those old anti-drug, marijuana commercials, where it shows a deflated human corpse lying on a couch next to a concerned friend or family member… I felt totally like that deflated doper… “This is what Andy has been like ever since he started tuna fishing. He doesn’t do anything. He just lies there. Its terrible.”

The finished product, marinating in teriyaki... I brought it up to my grandparents place in Maine and fed my extended family for two consecutive nights. 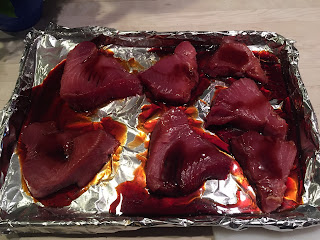 Anyways, special shout out to Keith for inviting me onboard. I had an absolute blast and I'm still jazzed up about the trip. Great seeing/fishing with Clark again and meeting another Batesie - Mike Watson. Hope to do it again someday.
Posted by Andy Cannon at 11:02 PM

Let it be known that I also ordered another kite and have relocated to the Admiralty Inn. Its a nice step up with fewer safety hazards...

It was awesome having you on the boat Andy. Next ride takes you 70 miles further south. Let me know when your back on cape and we'll get after em.

Beauty beauty. Good to get on the water with you Andy! Give me a shout next time you're in Boston.