Drive this and you'll get it in

This incredible specimen of a vehicle is available on Craigslist, and was brought to our attention by Brother Walsh. As its current owner (although can you ever truly "own" something this majestic) writes:

Good day my fellow hooligans. For sale is a mobile baby making station. This lady of the night has seen it all, and still runs like a top. She's long and smooth, just what the females are looking for. This iron lady has the fire breathing dragon that some pencilneck at Ford decided to call the Triton 4.6 liter V8. Will she do a burnout!? Does a the pope wear a funny hat? You're dang right she will son! Its got enough power to jump the Grand Canyon in 3rd gear, oh and its got air ride so when you come back down to terraferma you won't even spill your scotch. But what are we really talking about here? We're talking about luxury. You pull up to the scene in this 26 foot tube of sex appeal and the ladies know there's a new sheriff in town. She's got room for 6 on the back seats, from there it depends upon how you want to stack the dirty dames as to the actual capacity. This here hot rod is up to any task you got for it, from a night on the town to shuffling illegals over the boarder, the Lincoln is up to the challenge. And that there roof rack, she'll hold 4, count em 4 dirtbikes. So if the boarder patrol catches you, which let's face it is unlikely, you just roll them mudscooters down and ditch em in the forest, don't worry about the car, she's a survivor, she'll find her own way out. So if you're a mamby pamby and say "Well gosh Phill, she's got a lot of miles" I'll tell you the same thing I'll tell my opponent in my upcoming presidential run, SHUT UP. She's not high mileage, she's highly experienced. She's that silver haired cougar that is going to teach you what you need to know. "But Phill it's got rust spots and bondo" SHUT UP. She's got character, a pile of it. This hear steel was forged in the fires of Mt. St. Helans and hammered together by AMERICANS is Detroit. When you buy a new car made in Mexico you fund terrorism. Probably. So if you decide you're man enough to embrace this fine automobile then you c'mon up to Royalston and bring 600 US dollars and you got yourself a deal. 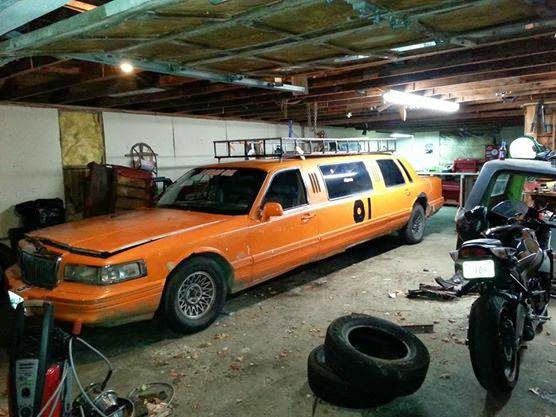 An email discussion lead to the idea of the BFC Alumni pitching in and buying it for the current BFC Members, and claiming it as our annual contribution to the College. This is how I imagined it playing out:

A black screen fades into the smoky tailpipe of this orange giant as it rattles down College Avenue, bottoming out on every pothole. Robert Earl Keen plays over tinny speakers, fully audible to passersby as one window in the limo clearly doesn't close all the way any more.

Wilkie e-brakes this beast onto the lawn of an off campus house. A cloud of smoke emerges as Robbins rolls down the window, and Clark pops out of the sunroof, shirtless, drinking Allen's from the bottle. Lane slowly emerges from the back, one glistening Bean boot at a time hits the ground as the camera pans up to his bright red jacket. With the stern look on his face of a central Maine drug lord, he points a sly, McConaghy-esque, finger at BFC Bassmaster Ford.

"You sober?" the Captain asks, as a subtle flick of the wrist sends the keys floating over the roof, glinting in the setting sun.

"Enough," replies the Bates Senior, barely able to form words from the jaw-dropped look on his face

"You boys have fun" says Jasper, as we walk six-abreast into the fading evening light towards the neon sign of the Blue Goose shining through the haze like a beacon of $2 beers.

The silence is broken by the sound of a beer being cracked opened, and the current BFC members emerge from the house and pile into the new machine.

"Who are those guys?" a slack-jawed freshman blurts out.

You said it, Clem.

One of the finest literary additions year to to date.... thank you Brother Clem.