Tipping my hat to the fact this is a fishing blog, Old Man Wilkie has granted me rights to publish hunting photos and stories as well, so calm your pants. Okay, he hasn't formally, but I figured he would back me....especially this time.

My good buddy, Joe, drew a bull moose tag in Colorado for a fantastic unit just northeast of us. To provide context, this is truly a 'once-in-a-lifetime hunt'--once you draw it (successful in the field or not) you are not allowed to enter the draw for a CO bull moose for the rest of your life, period. Furthermore, you have to put in for 3 years to just be granted access to the lottery drawing. I know guys that have been putting in for over 20 years without success. Joe drew it on his second chance, year 5. Some ol' timers were salty, needless to say. Additionally, Joe reviewed all of the 9 total tags given for the geographically huge unit and noticed they all choose 'rifle' (method of take is up to the tag holder). Joe decided to switch his tag for achery, making him the only one on this planet with a bull moose tag in his pocket for 3 weeks early in September for hundreds of square miles. I was all in.

Joe had been scouting all summer long and taking good notes on bulls he has seen. I accompanied him 3 weeks ago on a scouting mission and in 2 hrs one evening and 2.5 hours the next morning we had spotted over 20 different moose, maybe 3 worthy of the tag. 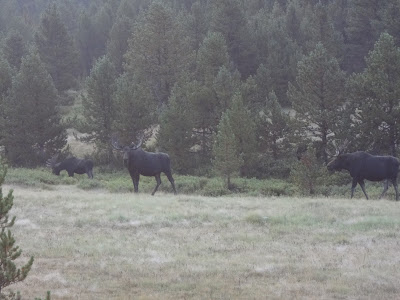 Season opened this past Saturday. We headed in Thursday, setting up the canvas wall tent in the dark. Camp came together nice; solid tent, stove, cots, and covered outdoor kitchen....we did it up. 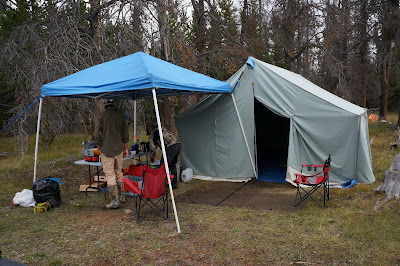 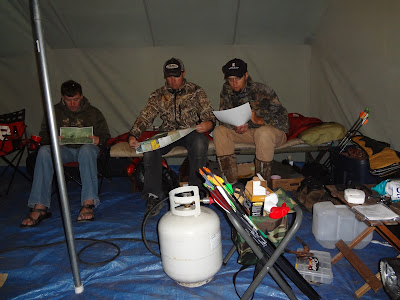 Friday morning hit and we headed out with our binos and soon spotted a nice bull. 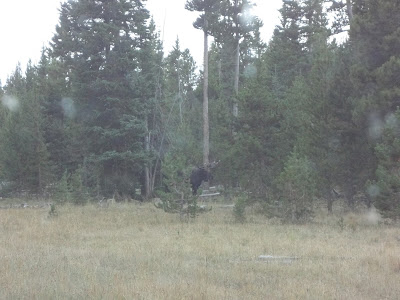 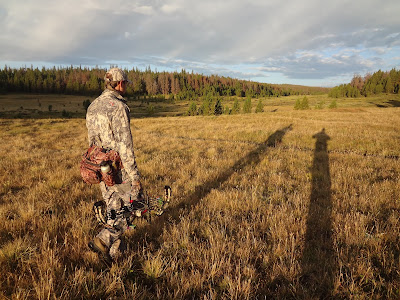 We took note, watched him head off into the woods, and carried on scouting. Soon the sun was up high and temps rose so we decided to peel off in the woods and see if we could jump some blue grouse. I didn't walk 20 yards and then all of a sudden the grass in front of me erupted. We ended up shooting two of the bigger males with a single shot 20 gauge my old man gave me when I was 11 years old. The thing is so small you can fit it in a pant leg. Grouse and eggs more than satisfied our mid-day hunger. 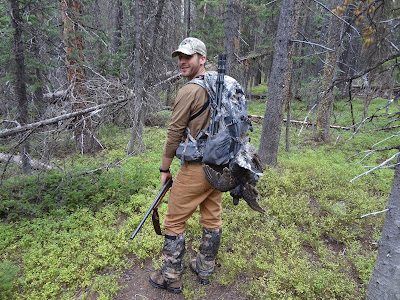 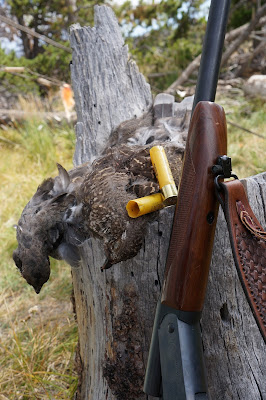 Two more guys showed up in camp Friday afternoon. We all went out on our own scouting Friday evening, all returning with no major sightings. The season opened the next morning and Joe and I decided to go after the bull we had seen the previous morning. The bull was nowhere to be found, even amongst the 2 cows and 3 calves we watched graze in a large open park. We moved to another drainage and actually jumped a dandy of a bull in the woods unexpectedly. He pegged us at 30 years, forcing us to freeze as we stood. A chase ensued to no avail. Back at camp another group member told of seeing a shooter bull that morning in another giant park that was a few miles away. We all geared up and went in to that park at 5 pm. We dropped down a timbered hillside making our way to the park boundary. All of us walking nonchalantly, Joe all of a sudden froze in place looking to his left. A big ass bull moose stood 50 yards away, a smaller bull behind him. Joe put on a stalk but, damn, the bull knew something was up and remained 50-60 yards out in the park. We suddenly heard a loud grunt and noticed another giant bull had entered the park roughly 600 yards away. The third bull met up with the other two and we proceeded to watch them until the sun went down. Close, but no cigar. 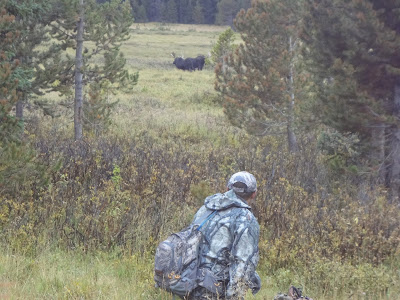 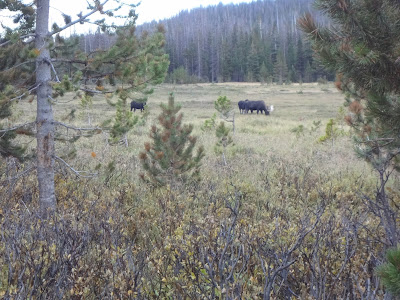 Our minds made up, we headed back into that big park at first light. Sure enough, the original big bull and smaller friend were out in the middle eating away. Problem was they were 300 yards away and closer to woods on the far side.  We decided to be patient and watched their every move for 2 hours.  While doing so, we listened to bull elk bugling and watched the two moose start to spar each other, echoing the open value with sounds of colliding antler as the sun rose over the mountains.  I felt I was in some National Geographic video.
Slowly they started to turn and head back to the north side of the park.  Joe made the executive decision to head back into the woods and flank them to the north.  Winds were not in our favor and the 3 of us broke away from Joe as he went into a clump of trees.  We pushed further around the point and soon saw the moose within 100 yards of where we expected Joe.
However, the bulls decided to turn and headed straight towards us.  I told the guys we needed to move another 25 feet and hunker down.  The big bull was in my view now and I ranged him at 70 yards.  As soon as I did, Joe appears in the woods next to us with an arrow knocked and release loaded.  Head-nods were exchanged.  We watched them graze for another 5 minutes, listening to them sneeze and grunt.  Finally, Joe started walking and he didn’t stop until the big bull looked up.  28 yards.  THWAK!!!
The big bull ran off wounded with Joe in hunt pursuit.  We looked at each other in awe, amazed at what just unfolded in front of us and now wondering why Joe was running at a 1,000 pound animal he just pissed off and was going to likely push further into the woods.  I guess out of instinct, he did not want that bull to go far and decided he was going to put another arrow in him.  He put 2 more in for good measure; the bull lying dead only a minute or two after being struck by the first.
Joe appeared out of the woods shaking like fat girl writing a love poem.  Euphoric is an understatement.  He dropped to the ground and we took it all in.
The bull is a stud Shiras Moose.  He was roughly 1,000 lbs.  It took all 4 or us 6.5 hours to skin, quarter, and haul him back out to the trucks. 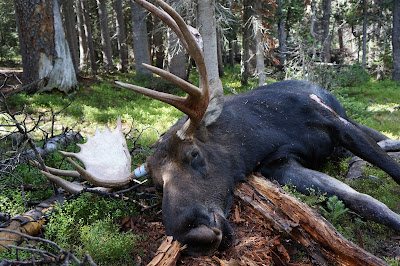 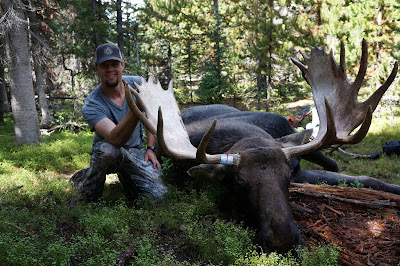 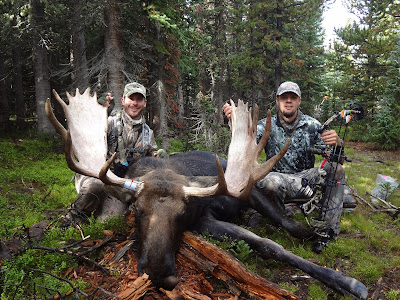 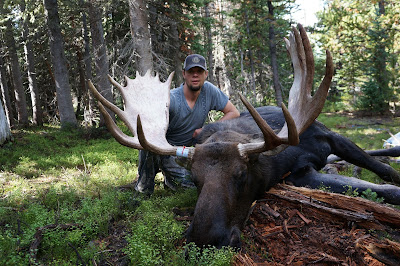 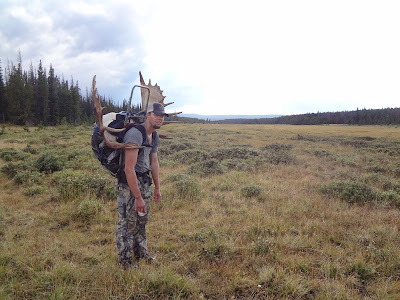 We ended up with 4 giant igloo coolers packed to the brim (the hanging weight at the butcher was 452 lbs!). 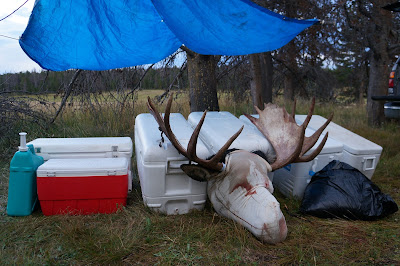 Whiskey flowed that night like the Mississippi.  Joe fell asleep in mid speech as exhaustion set in. 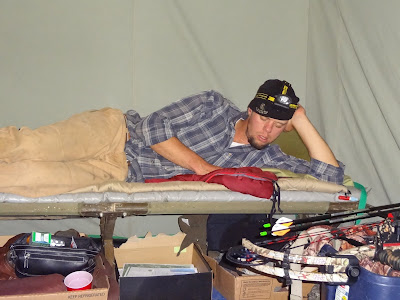 no shit big bill! a fine tale indeed, thanks for posting. that's a fine looking camp y'all have there.

A man's trip and a man's moose! Seek the freedom of the slaughter!

Big Bill, if this didn't just get me amped about hunting season nothing will! Holy shit, what a hunt. Man I love fishing with every inch of my soul but very few things compare to the feeling of complete success of on an epic hunt. I can only compare this to that 4 day nearly 20 mile tracking episode of that beast buck with my buddy Carter a few years back and this hunt you boys were on was a once in a lifetime episode...truly fantastic! We need to talk on the phone so I can get the juicy details.

It is highly recommended to get the information about the animal and land where you are going for hunting. This will help you enjoy the adventures more and you will be able to take the preventive measures beforehand. sphunting

Why do people bow hunt. How do I choose the right equipment for bow hunting? This article will take out the confusion of what bow is right for you, the compound bow or the recurve. Visit to know more