I've covered some ground since I last checked in with you good folks here at Solid Hookups. I believe I was in Colorado then, and on my way to Maine shortly thereafter. Well, I did go back to Maine for a little while. Then back to Colorado for a wedding. Then back to Maine for another wedding. Then back to Colorado with Ariel to purchase a vehicle, pick up our few meager possessions from storage, and drive out to our new home in Wenatchee, Washington, where I would begin another six month contract of fisheries work for the feds.

We drove to Jackson Hole the first night and stayed with my aunt and uncle there. Bright and early the next morning we headed up into Yellowstone National Zoo where we stopped to see Brother Jesse and a few of his Bates compatriots. A round of Jesse's infamous breakfast sandwiches was enjoyed before we had to part ways again. They were headed off towards a quintessential Yellowstone fishing destination, while Ariel and I had intentions of making it to Coeur d'Alene before the day was through. We made it, and after a few more hours of driving the following day we finally laid eyes on our new home, nestled in a hot little valley, i.e. the Columbia River, between the Cascade mountains to the west and the plains to the east.

Between working 50 hours a week, house hunting, home furnishing, and exploring the local area, I haven't had much chance to fish yet. Really I've only fished twice to speak of since I hung my rod up from New Zealand. However, work so far has taken me into some really neat little corners of this region, and we've seen some incredibly beautiful native little trout. Most all of our work is funded by the Bonneville Power Administration as per mitigation efforts to there being about umpteen million dams on the main stem Columbia between here and the ocean that all have tried diligently to snuff out native anadromous fish populations. Our focus is primarily ESA-listed species, such as Columbia River steelhead, spring chinook, and bull trout. Most of our efforts could be chalked up to simple monitoring; collecting biological data and performing population estimates in sub-basins and tributaries to the Columbia River. A work typically entails us either driving or hiking into 3-5 different sites a week, setting up block nets at either end of our study reach, putting some electricity in the water with a backpack electrofisher, and seeing what comes up. Here's a few pictures of what we've seen so far.

We visited a tiny little creek up the Entiat River on Monday. It's unlikely that there are anadromous fish up there as we seemed to climb straight up the side of the mountain into what resembled a hanging valley to access our site. Right off the bat we started finding fish. Little flickers of flame darted in and out of the field of electricity, their bellies a blaze of fire orange. Closer inspection of the the creeks residents reveled an awe-inspiring mystery of rich colors and tenacity of life. We found fish after fish, they poured out from under almost every piece of woody debris or log jam in the whole stretch.

Close to a hundred were captured in the 120 m reach, each more beautiful than the last. We didn't end up tagging any because it was obvious they were some form of cutthroat and we only tag ESA-listed species. I was disappointed as that meant we weren't going to stick around to do another pass, and I just wanted to spend a little more time with these rare little treasures. Their true identity remains cloaked in questions. They obviously have some degree of Westslope cutthroat in them. Hell, they might even be a relic population of pure Westslope cutthroat. I'm inclined to think that they are some form of Westslope x redband trout; at least to me they appear a perfect cross between the two. Both species spawn in the spring, but in the high country it takes longer for the water to warm up enough, and I'm also guessing that at their elevation they were just getting dressed and ready for the occasion. 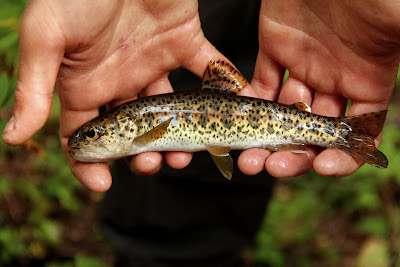 some real pretty fish right there.

great update and gorgeous photos as always. glad to have you in WA my friend.