It's mid July, it's hot, yet we make due.  Daytime hatches are a distant memory and when the air temps are in the mid to upper 90's as they have been, even standing in the flowing stretches of a tailwater seems too warm.  For some unknown reason we punish ourselves and venture out on such days knowing that the fishing will be piss poor; we've all done it.

This day was no different, the water, the hatches, the expected slow fishing lined right up like desperate parents seeking Tickle-Me-Elmo on a black Friday.  I dripped sweat and finished the two beers in my pack far too early.  Part of me considered leaving after several hours of limited action.  The action I had sampled was in the first 15 minutes and I had gone 0 for 3...first to a heavy current, second to a log, and the third threw the hook in mid air.

When the beer was gone along with my hope for the day, I tied into a respectable summer specimen on a wet fly. I gave chase downstream through chest deep haystacks, landing it in the last possible non-drowning zone.  Spirits were renewed. 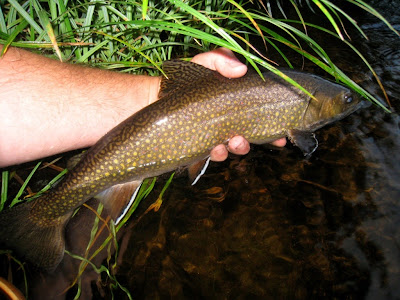 The remainder of the day continued on as before but the moment I'd been waiting for was knocking on the door.  Move was made, position acquired, first cast hookup.....don't mind if I do. 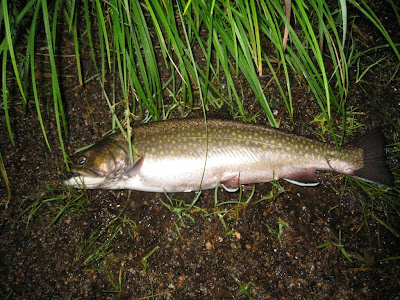 ﻿Poor picture of this 18" female but I knew what was lurking about given the first cast hookup and I was eager to continue my offerings.

The big male didn't waste anytime avenging the landing of his girlfriend.....one of the biggest I've danced with this season. 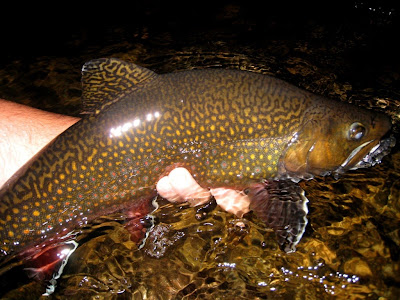 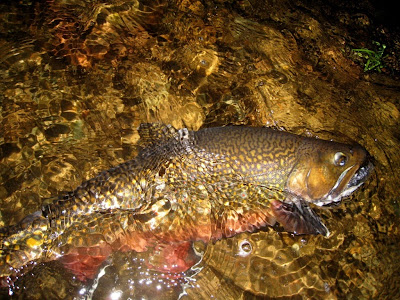 ﻿Go sweat your face off, they're still out there!

Posted by Andrew Wilkie at 1:35 PM

oink is right! what a pig.

Those are the brookies we live for

Quasimodo limps around in maine streams. who'd a thunk it.