I may or may not be mistaken, but I do believe this is my first ever post to this esteemed site. Mr. Robbins, aka Brother Jesse, aka Port Steele, aka jessnuts, depending on where you find him, has been after me for quite some time to put something up here. I've never been terribly disciplined about keeping a journal or any sort of regular blog so make of that what you will. I suppose I find it hard enough to keep track of myself and my own doings, let alone share much of any of that with the rest of the world.

However, I do now find myself with some free time and the inclination to finally oblige Mr. Robbins' wishes. It's a balmy 25° outside right now (celsius, not farenheit), but a gale blows out the nor'west, quashing any prospects of casting a fly today. Yes, if you know much about the area you might have guessed that a) I'm not in the northern hemisphere, but also that b) with it's propensity for nasty weather from that particular direction I am in fact down in New Zealand. More specifically, I am currently out on the Banks Peninsula in a quaint little town called Diamond Harbour staying with some friends. My wife and I arrived here just over a month ago, and though only a modicum of fishing has occurred since, I shall provide you with a brief synopsis of the fishing that has occurred recently, and some not-quite-so recently, dating back to my summer in the bush of Alaska. Yes, that's how long Jesse has been after me to post something (also read: that's how long I have been ignoring his requests for an update to the BFC community.) So here goes...


This summer I returned to the Alaska to run a chinook salmon monitoring project on the Kenai Peninsula. The river I was on, the Killey River, is home to the largest stock (population and size-wise) of chinook in the Kenai system. In fact, we counted some 1,450 fish through our weir, out of an estimated 3,333 total escapement. Unfortunately those are some pretty dismal numbers, but maybe once ADF&G pulls their head out of their ass they'll do something about it. Out of our total sample the biggest fish measured 1,250 mm, mid-eye to fork. Likely fish that size weighed somewhere between 60 and 70 pounds...


I had grand plans of pursuing these monsters with a fly, and almost even invested in a new 15' 10wt spey setup, but soon realized that the conditions were not especially conducive to my particular delusions of such grandeur. It's a relatively large, glacial river with a visibility of maybe nine inches on a good day, so I implore you to attempt finding one of 1,500 fish in such a place. You may now see the cracks in that foundation...

So those hopes and dreams crumbled away with the rising water and I resorted to schooling my co-worker at catching Dolly Varden on the one decent gravel bar that was in fact conducive to catching fish. It gave me great joy to outfish him 2-1 over the course of the summer, for yes, we kept track, but also as Jesse put it during one conversation, "That's a lot of time to spend with a man you don't particularly care for..", and it was my only consolation for his making my life hell.

Unfortunately the situation sounds much better in writing than it was in actuality. It's hard to complain about catching countless Dollys, but realize that perhaps you too might get bored after drifting an egg down the same run for the 5,000th time. And it was literally the only run we had to fish without engaging the bears in some good ole Alaskan-style combat fishing... which happened yet regardless. And did I mention how big of an asshole my coworker was??

I did manage to get out and fish the Kenai proper once while I was in town between projects. I had a friend I met while hitchhiking back from a day of spring steelhead fishing who was guiding for a lodge on the peninsula, and he invited me out for a day when he had only one client on the boat. The fishing wasn't spectacular, but it provided some great photo opportunities.

The second half of my season was spent in the interior of the state in the friendly little town of McGrath. We were out there to conduct a population study on broad whitefish in the Kuskokwim River, which migrate upriver right before freeze-up to spawn. It was classic fishery biology in the sense that our goal was to simply find the fish and figure out what they're doing/where they're going, but unfortunately the day-to-day breakdown of that was pretty repetitive and monotonous. Of note were the spectacular Northern Lights I witnessed one frosty night, and also the impressive array of fish species in these middle reaches of the Kuskokwim. We sampled six different species of whitefish, coho and chum salmon, arctic grayling, some large Northern pike, and even a fair few burbot. One burbot we turned up while electrofishing I would swear was close to a meter and a half long, with a head as large as my thigh! I was particularly intrigued by the sheefish, or inconnu, which is a rather large species of whitefish (family Salmonidae, as many of you may know) that feeds on other fishes much like a pike or brown trout. They are incredibly sporty looking, like a cross between a snook and a tarpon, and have a handsome coat of scales that reminds one of a super flash sports car. Anyone for a destination trip to the Great North?? 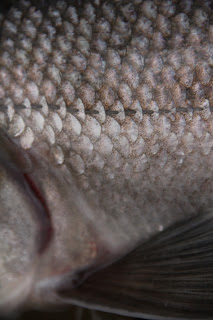 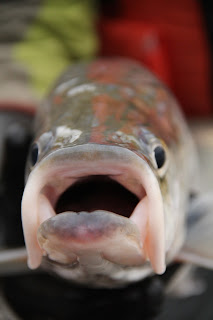 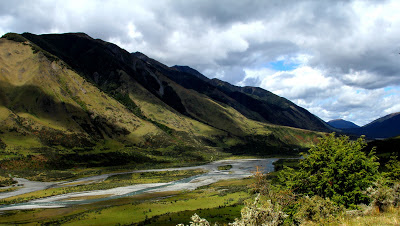 So after returning to Colorado this fall I got married fall and now I don't fish. Just kidding. But seriously, I certainly haven't fished as much, but that may or may not be coincidence...

The honeymoon in New Zealand was actually more an afterthought than anything, as we had plans to come down here before we decided to get married in the first place. Since I do have a wife to consider I haven't fished as much down here as in years past, when I was with fishing buddies like Robbins and we were hell-bent on covering as many river miles as we could squeeze in between the hours of dawn and dusk.

The fishing that has occurred has been with varying degrees of success.

Attempt 1: Spook 2 fish, see no others.
Attempt 2: Get blown off the water by nor'wester.

Attempt 3: Detour for brief look at river; get distracted trying to chase sea run browns that promptly disappear after rigging up.
Attempt 4: Lousy weather after three hour hike in; manage to seduce 3 fish in between squalls of wind and rain.
Attempt 5: Went out with guide friend; might as well not wasted tippet tying flies on as the fish didn't seem to take notice of our offerings anyway.
Attempt 6: Beautiful day, fish hard on the feed, both below and above. Match-the-hatch type scenario, where none of what we had matched the hatch. My friend gets one fish to come up early on, tippet breaks on hook set (likely my fault, it was old tippet...). I cast to the next feeding fish for an hour plus; get him to rise twice to a tiny emerger I can't see and miss both opportunities. Promptly cast fly into branches afterwards. Twenty uninterested fish later, the last one of the day rises confidently to my blowfly, which I confidently lift up and out of his way on a severely premature hookset.

The following pictures are from the one outting that yielded fish to hand (Attempt 4).

So there. I've caught some fish, not as many as I'd like, but I'm making do. Considering that I only caught nine respectable fish my entire go down here last year, the  three from that one day suddenly don't seem so bad any more. And I might add, that was my personal best day down here. So maybe I'm doing alright after all. And there are fishing plans in the works for the upcoming weekend, too. Maybe I won't mention that it might be near some canals near a salmon farm, and maybe I won't mention that it might require sucking down a few cold ones while drowning some bait, but then again if I said that you wouldn't want to hear that fish around the 20-30 pound mark are not uncommon from said location by such unorthodox means, so I'll save my breath.

Speaking of which, I'll try to keep up a little more in the future, i.e. more frequent/succinct, but no promises. I've never good with that sort of thing anyway...

lucas, tremendous post! great photos and stories. makes me think about our time in the Silver Fox with sweet chili and noodle sandwiches and all the rest. safe travels my friend.

Great to get word from you Brother Lucas ! Awesome update

Great to hear from you Lucas! Happy to hear things are good and as always, beautiful pictures.

Lucas, sweet stretch of life you just laid down there. Keep feeding us te written word, glad you are well buddy.

Bearded one, great to hear about your adventures. If they bring you back through the front range make sure to holler.