With a buddy turning 40 (yes I have a friend older than Old Man Wilky), a group of us decided to plan a trip down to New Orleans for eating, drinking, and some fishing to celebrate.  We had three guided flats boats booked for two days, some fishy dudes in the boats, and decent looking weather.

We woke up early Thursday morning, got picked up by the guides, headed to a podunk diner for a country fried breakfast, ordered some po-boys to go, and headed to the docks--not the typical start to a guided fishing trip, but we we're digging it and ready to rip.  This day I would fish with my buddy Jin, the man of the hour, and the manager of our local fly shop in Fort Collins.  We would be with Rocky, a Louisianna man with a thick southern accent and perverted jokes to match his twang.  Rocky looked at the clear sky and recommended we go head hunting for big boys.  Jin and I were all in.  However, after realizing neither Jin nor I had ever landed a red fish on the fly, Rocky stopped on a flat and soon put both Jin and I on fish that were ready to eat.  Within 20 minutes and 4 casts, Jin and I had put 3 red fish in the boat, the biggest one around 8 pounds (what I thought was a very respectable fish).  Jin soon saw a dark shadow up ahead and layed a perfect cast, guessing at the direction its head was facing.  After a decently long fight, Jin boated a 28 pound black drum that was ugly to the eyes but gorgeous to our morale in the boat. 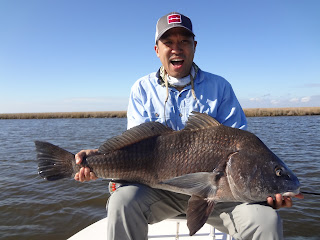 Before we knew it, the clouds moved in, the wind picked up, and our visability went to shit.  Needless to say, this was not good for chasing and sight-casting to big reds.  The rest of the day was very slow and boats back at the dock reported similar scenarios with only a few fish to boat.

The guides met at the end of the day and decided water conditions were likely clearer further south.  We ablidged and the next morning we headed close to 2 hours south of town......It was a wise decision to say the least. 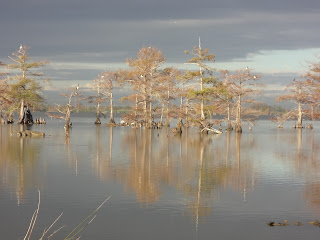 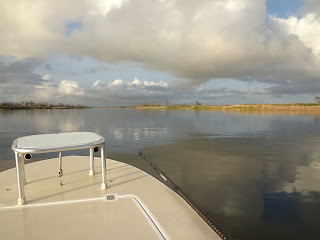 We were immediately on fish.  Up first on the deck, I was late on two crusing reds, but soon found a smaller single and he was eager to eat....a good start.  This fish weighed out at 6 pounds (what I was used to seeing in Florida). A beaut to boast. 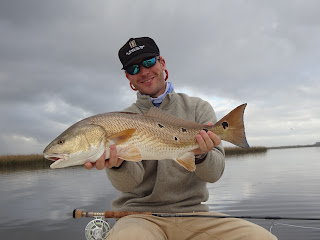 My boat partner, Dave, soon put another one in the boat.  They were growing, his pushing 10 pounds.  Then pure meham ensued!!!  We poled back into a calm bay and I spotted two crusers.  I led the far fish a little too much and the fly went by its shnoz without reaction.  However, it sat perfectly for the trailer fish closer to the boat.  She turned and enhaled.  After a hell of a fight, an absolute monster was next the boat. 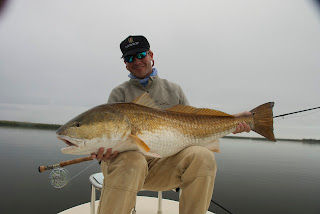 She weighed out at 33 pounds! For reference, that is a 9 weight on my lap. 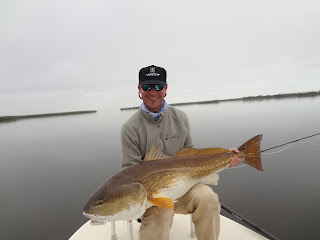 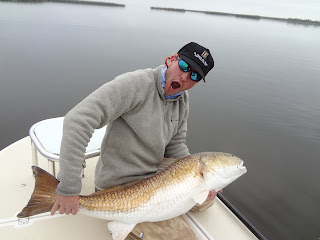 In the red fish world, the 30 pound mark is considered truly a fish of a lifetime, especially on fly.  I went basurk, my guide did as well.  However, this was just the beginning of probably the best fly fishing day of my life.  Dave hooked into another, no more than 5 minutes later.  I looked up and saw another crusier with the fish Dave had on the line.  I picked up the spare rod, one cast, and we were doubled up. 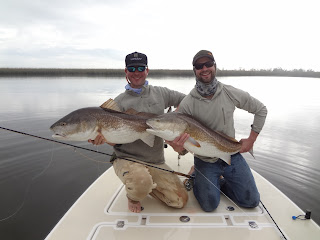 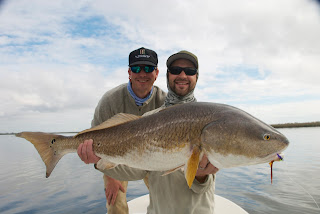 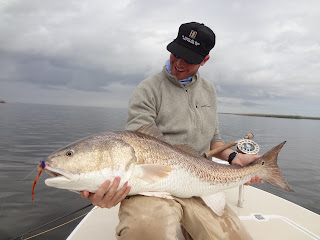 After boating some toads and realizing the fish wanted to eat bad and were hanging fairly high in the water column, we pulled out the topwater popper for shits and giggles (poppers don't usually come out in December).  Video tells all. 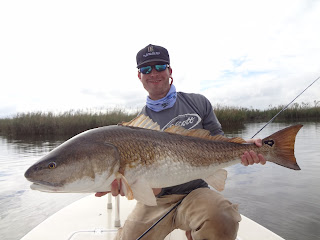 Dave and I would double up 3 more times by the end of the day.  We ended up boating 4 reds over the 30 lb mark---the first time the captain had that happen in his boat.  We boated a dozen more between 15-29 pounds. We finished picking off 3 more in deeper water heading back to the dock that were busting bait under birds.  They were much more colorrful. 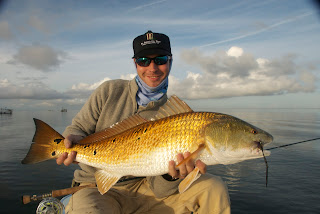 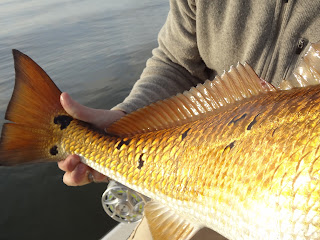 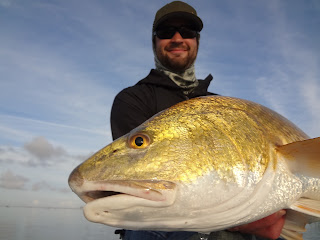 Sorry for the long post.  Still riding the high.  Crazy day and crazier eats I will never forget.
Posted by BillyGas at 9:07 PM

Congratulations on a great
trip, nomination for post of the year ? Can I get a second ?

hot damn big bill! quite the specimen there. good on ya. nothing like hearing two grown men giggle like girls on video.

You are straight up criminal Bill. Those fish are sea monsters and you look pure GQ with that sweater on...

Baaahh....sorry for the long post?!?! I wish it had filled a full page. Unbelievable my man! From Red Rookie to Red Legend in two days, sign me up.