The 2012 Deer Season ushered in much the same as the '09-'11 seasons entrenched in the hunting aura of Sustainable Structures. I began in September with early goose season, followed by ducks & geese in October, which is promptly closed in upon by rifle season for deer in November. The months leading up to November were plagued by rally cries from the Sustainable bow hunters and a personal attempt to maintain a vigilant fall fishing schedule. In short, when I can hold a rifle in my hand come November, I'm fully committed to the cause.


My first weekend of the Maine resident season was hampered by a Steelhead fly fishing trip to Western, NY; my second was busted by a need to gain some serious ground on my parent's roof, which setup the weekend of 11/10 as my first fully committed stint of the season.

Some kind folks at one of our jobs in Whitefield granted us permission to hunt their large parcel of land, a piece mixed with fields, hardwood, a pine/hemlock grove, and a boggy stretch along the river. A couple days later we ran into the new owner of an abutting property and he also granted us permission to hunt his land; between the two properties we had nearly a hundred acres at our disposal and there was hardly an inch of it without quality deer sign. Troy, Max and I hunted early one morning before work and Troy and I followed that up with multiple after work sessions over a week long period....we had it pretty well dialed in.

Last Friday on the way to work Troy texted me wondering if I had any interest in an evening hunt in Whitefield on my way home from another job in Newcastle. I was already an hour into this very same thought process and after agreeing on a time to meet, I had the day to ponder what stretch of woods I would attack that evening. The plan was set, the day dragged, and soon I found myself pointing my vehicle in a northerly direction toward an evening hunt.

We suited up, spent a few minutes discussing the possibilities of deer movement that evening, and eagerly headed off in completely opposite directions with a common goal. I chose the high road in hopes of cutting off a buck moving across a recently cut stand of pines and hardwood, while he hedged his bets on a buck moving along the river heading uphill toward the fields.

Twenty minutes into the hunt at 4:23 p.m this text message conversations ensued:

Me: I am into them (two does had just passed in the distance)

Me: Blowin' and Snortin' at 60 yds (initially I thought they had winded me but realized they were blowing and snorting at a house cat that was passing very near them)

A couple minutes passed and I heard a buck grunting and ambling in my direction. Slowly it worked its way toward me, possibly getting as close as 20 yards but never appearing from the thick cover in front of me. The wind was dangerously close to revealing my location and I held my breath every time it gusted. The deer sounded as if it had turned perpendicular to my straight ahead line of sight but it still moved at a slow rate. After another moment of silence, one twig snapped, then another and I finally got a view of a rack emerging from the alders and young pines. As it passed along a down birch tree I caught a window of opportunity as the body came 50% into view in a shooting lane at 40-50 yards. I pulled up, shot, swung my gun to the right waiting for the deer to cross the next shooting lane and dumped off another round as the deer was bounding away. It ran 30 yards or so, I heard the signature crash of an animal piling up, and at 4:36 the text message conversation restarted.

Me: Deer down I believe

Troy: I hope that was you

Me: And I believe it's big

Me: It ran awfully slow and not far

Me: You coming out?

Troy then called me and headed my direction. We gave the deer a good 30 mins after the initial shot and tracked blood ten or twenty yards when the deer jumped up. There was a lot of blood, and we were flabbergasted it had enough stamina to continue on. We waited a few minutes, tracked it onto a skidder trail and weighed our options. We decided to give it another 30 minutes to curl up for good. As we stood in the skidder trail, headlights on, talking softly, someone began walking down the trail. A warden we thought? We were legal in every respect and waited for the individual to approach. Turned out to be a neighbor who had heard the shots and had come to investigate. We introduced ourselves and after a bit of conversation he asked if he could join us in the tracking of the buck. We obliged and he took off immediately on the trail (sooner than we would have liked). As much as ten yards in front of us he scrambled eventually jumping the buck again driving him across the road and into the fields near the house where we had been working. The man got twisted up in some brush, fell head over heels into a large puddle, and retired for the night telling us there was little chance we would find it that night. This did little for my personal confidence. Troy and I tracked it across a field, painstakingly looking for drops of blood on tall grass and eventually we took a 30 minute beer break. The sky was full of stars and a legit meteor shower was in full effect.

After our break we returned to the middle of the field and managed to track the buck to the woodline in the far corner of the field. Tracking in the woods was far easier and we made quick work of another 70 or 80 yards until we realized our close proximity to the river. A group decision to bail on the evening was made; we feared we would drive the buck across the river and not be able to pick it up on the far shore. It was tough, but it would prove to be the right decision. Total time tracking 3 hrs.

I crashed at Troy's place that night in an attempt to rise early and get back on the trail. We passed the late night hours watching fly fishing videos, eating pizza and tipping back a few beers. 5am came early but I was already mentally in Whitefield. By 6:10 we were back on the blood trail, guns loaded, spirts high.

Our first blip on the track came as the deer approached the river and came into an area where someone had breasted a turkey. The mess left by that hunter mixed with the mess that this buck was depositing and we were hung up for a good 20 minutes in this location trying to make heads or tails of which way the deer had gone. We finally cut the trail as the deer veered to the right heading upstream along the river. Up and over all kinds of debris the buck went but it always maintained a close proximity to the water's edge. Closer and closer it got to the shoreline as it headed upstream, finally getting to a point where it was virtually walking in the water and it was there that we first officially lost the trail. Round and round in fanned out circles we went, attempting to ensure that it had not wandered back away from the river.....nothing. The river was probably 20 yards wide at this point and we felt it was unlikely that it had crossed in its condition and given the fact that we had given up on the track the previous night. The buck was not running, anything was possible.

When it seemed that we would have to drive several miles around and hike down in from the opposite shore, Troy stuck gold thirty yards upstream. It swam upriver and had gotten out on the very same bank. It kept a steady walking upstream course and eventually came down a steep bank right back to the river. This was the second time we had officially lost the track. We fanned out again, walked upriver, downriver, and eliminated every possible escape route over the course of 45 mins to an hour. One track on the river bottom suggested that indeed it had crossed. We would have to hike out, drive around, hike in on the opposite shore and hope like hell that the deer had indeed crossed and that we could pick up it's trail. There was a big tree blown down part way across the river a ways downstream that had collected floating debris that we might be able to cross. Downstream we went and moments later we found ourselves making a sketchy crossing over 5 ft deep water, soon we were on the other bank. We had flagged our last position on the east shore and made quick work of locating an appropriate position where the deer may have forded the river. In thick swamp grass I found the blood I was looking for and slowly we tracked it toward the woods.

Troy worked the woodline as I tracked through the grass; he cut the trail on the treeline and we once again found ourselves on the trail to victory. It didn't take long however for the trail to seemingly dry up and for the third time our hearts sunk as fear crept in that the adventure was over. Fanning out we found little as I approached the water's edge and Troy worked into the woods. I looked down to find a deep track along the water and as I slumped down to investigate I found a single drop of blood. I yelled to Troy "I've got blood over here" and as I did I thought to myself that this damn animal was about to cross the river again. No sooner had the thought crossed my mind and I glanced across the river to the far bank to see an antler laden body lying along the opposite side of the river. "He's down and he's dead!!!" I hollered. Troy came jogging in and the most epic chest bumping, man hugging episode of all time ensued. Pure elation some 16 hours after pulling the trigger. The buck had traveled a solid mile, swam upstream, crossed the river twice and eluded us on several occasions. It was the outcome we had begun to believe would not happen, pure, gluttonous, outdoorsman joy at it's best. I will never forget it. 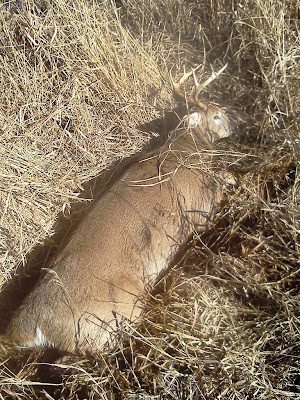 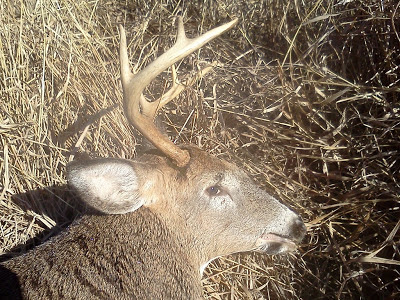 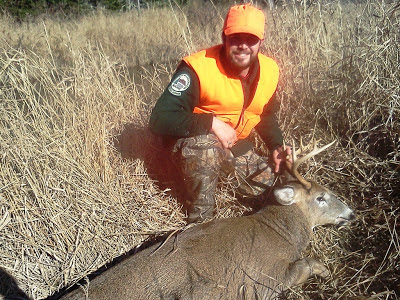 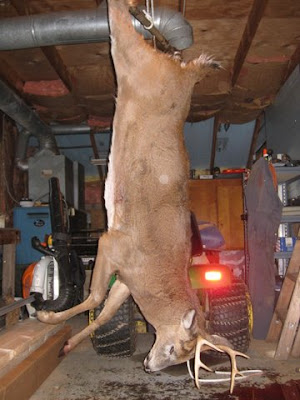 I'm sitting in a crowded airport in Chicago and this was a great read !

Thataboy Wilks! A Dandy. Hell of a story to boast. That body is huge! Incredible track job--I know how hard and frustrating that shit can get. Oh to the sausage. After that read, I feel like celebrating.

Hot damn. Me thinks you got some Iriquois blood in you, Old Indian Tracker....

Where'd you hit it?
I can only assume you fired with your eyes closed, grazed the deer on the leg, then when you finally found it, the deer was still alive, so you had to bash it repeatedly with a tree branch while apologizing/weeping.

Epicness. Way to stick with it man