For years, my family has talked of Alaska. With my recent life transition from Wyoming back to the East Coast and my father's retirement, the trip became a reality during the first two weeks in September. It would be the first time any of us had ever visited the state and the first time we had organized a trip as a family in ages. Well before our departure date the itinerary was set - a week exploring the inland passage in the Southeastern Panhandle, a few days at a lodge near Anchorage, and a few days at a lodge in Homer. None of the places on our list were fishing destination specific but with a couple 6 weights picked up in Seattle thanks to a one, Jesse Robbins, we were ready to rip some lips in between scheduled days...and rip some lips we did.

Fishy highlights are as follows...

8/31/12
Arrival in Juneau. Great little town completely cut off from the rest of the world unless you have a boat or plane. The downtown area is full of gift shops selling souvenirs to the hoards of people that invade the town daily by way of cruise ship. After a brief conversation about fishing options with a guy working at a local shop, I was on a taxi heading out of town towards a creek that, according to my intel "miiiiight have some spawned out pinks and a few dolly's left in it". There were a few kicking around. 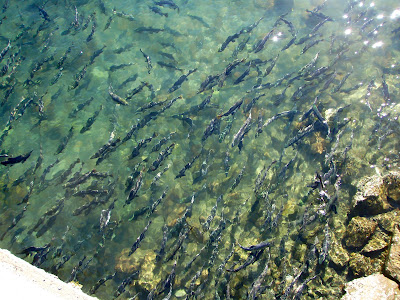 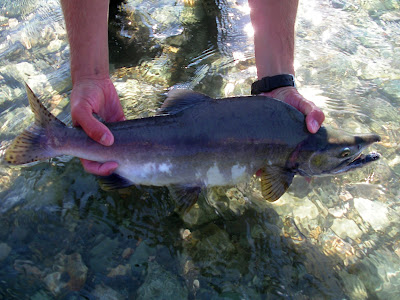 They were not spawned out. 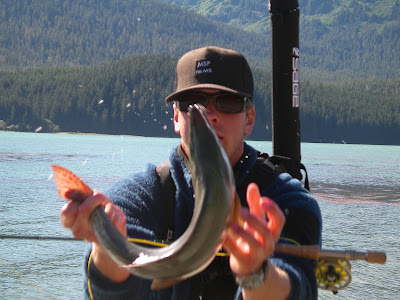 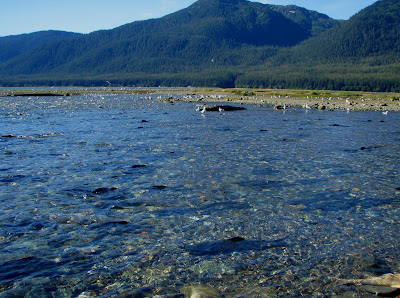 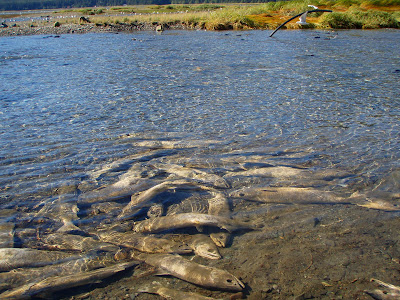 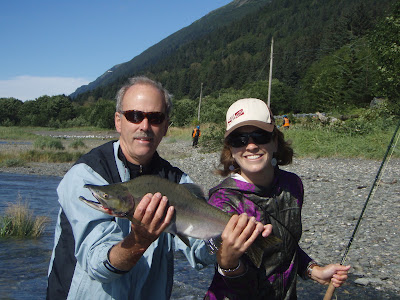 The irony of this place was palpable. Here I was, alone with my family, amidst the most beautiful and primordial run of wild fish I had ever witnessed. Tens of thousands of pink salmon pushing upstream in a last ditch attempt at passing on their genes before their inevitable death and decomposition into the nutrients that would support the next generation of life in the Gastineau Channel. A few miles up the road were people who came to see the wild and raw natural beauty of Alaska but were, at the time, buying low quality t shirts and glow in the dark key chains. I felt very very lucky to have received the friendly tip that led to one of the coolest days on the water I've ever had.

9/8/2012
After a week of wildlife viewing and exploring the inland passage, we made our way to the first lodge, just outside of Anchorage. Nearby, there was only one fishable river after a week of rain had muddied up most of the other options. No matter, it had strong populations of sockeye, silvers, pinks, and chums swimming around after the summer's spawn and, more importantly, dolly varden and rainbows that hadn't given up on life and would still eat eggy patterns or something with some sexy flash to it. 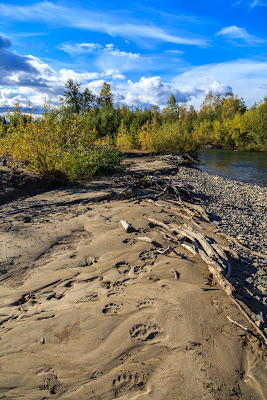 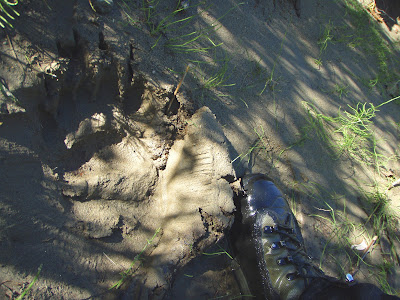 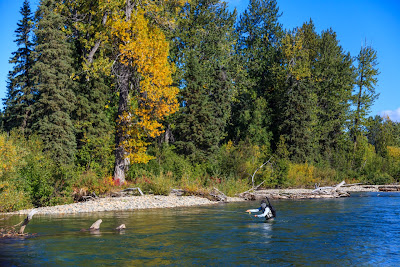 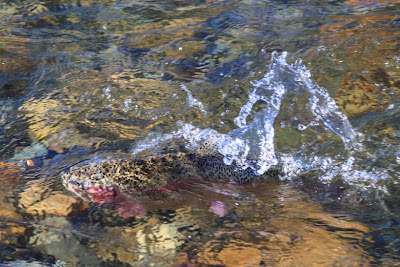 Bead patterns were the ticket and healthy fat rainbows were the main attraction. 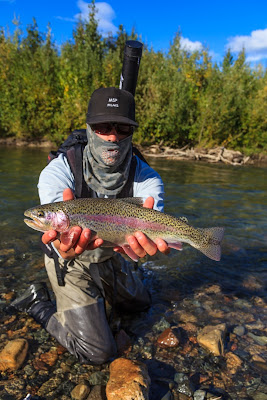 Many thanks go to guide Tyrone Potgieter who found the fish, kept it real, got some great photos, and avoided the bears.

9/12/12
On to the next town and a completely new fishery. The charter outfits in and around Homer had just closed up shop for the year on Labor Day so options were limited. I did however receive word of epic salmonid waters a short taxi ride to the North. Taxi-in fishing had produced in the past and it would produce again. 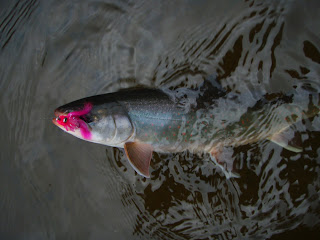 I attacked the river for 9 hours this day and although a few dolly's came to net, silvers and steelhead were the main attraction on the Anchor River and the reason people fish it. I hooked into a few silver bombers that day, none of the hookups were solid. This was a hard learning experience as I'm relatively new to steelheading but the time spent on this river was incredible and included such unforgettable moments as an adult bald eagle swooping down to snatch up a dead chum salmon mere feet away, witnessing the landing of a few 3+ foot silvers and steelhead by nearby fishermen, and a good 2 hour lecture on steelhead fishing, life, and love from Bruce, resident of Anchor Point, steelhead conquistador, and all around fuckin boss.

I wouldn't even know where to start or how to describe the rest of the trip, the wildlife seen, and the crisp, jolt of life that I constantly got in the presence of such beauty. Suffice it to say that I've never experienced such a profound connection to a landscape in my life. It felt like leaving home when we flew out of Anchorage even though we'd only known the place for 2 short weeks. At some point, I will be back. 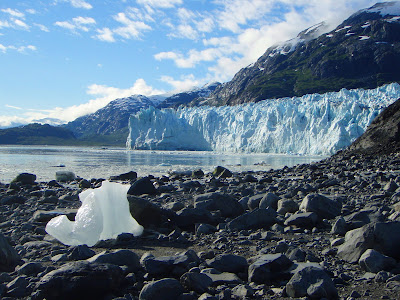 9/14/12
Immediately after leaving Anchorage, I'm off the plane in Seattle and staying with James and Jesse for the weekend before heading home. James and I are out of the house well before dawn the next morning and cruising down the road in search of salmon. 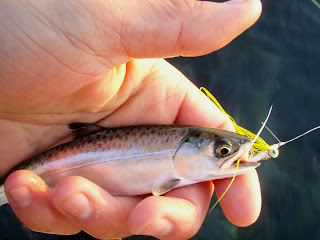 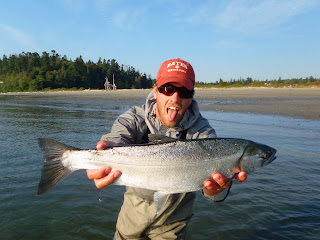 This fishbeast provided sustenance in the form of salmon roe sushi rolls and soy and maple syrup marinated steaks. 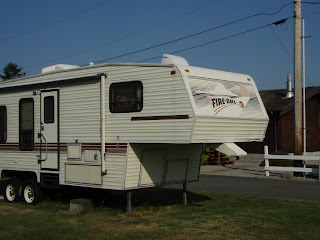 9/16/12
Jesse and I hit the road and drove 100 miles East to grease some healthy little rainbows from a raft in the first Western style trout attack I had been a part of since leaving Wyoming. 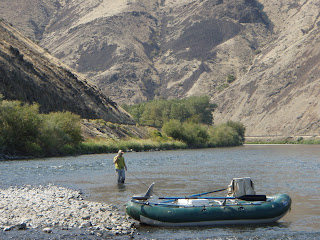 Felt good to fish in the wide open. Felt like being home.

Thanks for the good times guys.
Posted by Morrell at 9:26 AM

i don't know what you and james get up to when you're alone but it must do something for the fishing...

Great post. The RV was a sign that all things were right with the world at that moment. Caught my first ever coho last week at a new beach mr. robbins showed me.

Congrats on an incredible trip Morrell.

Wow, one hell of a trip. Thanks for the read.