At some point earlier this year my buddy John Libre (Bates '02) calls and says there is a free spot on his brother-in-law's boat for some fishing tournament and do I want to go fishing in Maryland in August. I tell him I'm interested, but not sure I can make it work schedule-wise, and let me get back to him about it. He calls me again at the end of July to remind me that I never got back to him. So, I check the calendar, figure out how to make it work with the wife, and start to figure out how to get to Ocean City, Maryland. I'm thinking "awesome, I'm going fishing, I'll get to meet some new fishing buddies, and we'll probably have a cocktail or two."

About 1-week later I'm on a shuttle bus from the Philadelphia Airport to what appears to be the back parking lot of the Philadelphia Airport, but is actually the home of the tiny-ass plane that is taking me to Ocean City. My carry-on bag was almost too big to be checked on this plane. I thought they were going to check to see if the weight of the passengers was evenly distributed on each side of the aisle. On the final descent into Ocean City the pilot didn't say "flight attendants prepare for landing," he just turned over his shoulder and yelled "Elaine, sit down!"

John picks me up at the airport and I find two coozied can beers at my feet, and on the 45min drive to Ocean City I begin to realize that this is going to be some more serious fishing than I anticipated. Turns out we're in the 2012 White Marlin Open, the largest Marlin tournament in the world...something that John failed to mention previously. At this point I begin to remember him saying there was a cash prize, which I had in my head as $250,000. Turns out I was off by a 0. It was a $2,500,000 purse. Oh.

So here is the cast of characters that I meet upon my arrival at our condo at the marina:

John Libre - He significantly undersold this trip when he invited me.
Frank Coulson - Brother-in-law of John Libre, owner and captain of the 36' Contender "Hard Four," and all around great dude. I would alternately call him "Boss" all week.
John "Zoo" Andrae - real name John, but was a child model and got this nickname from Zoolander as a result. Obviously. He's the fishing captain out of New Jersey and to put it simply, knows how to fucking fish. He would want to murder us 14 times during the course of 3 days.
Todd Saylor - Frank's buddy from way back and college, who now lives in Cancun where he owns a bar and sells oceanfront lots. And yes, he is exactly as fun as you're thinking he probably is.
Chet - the fucking new guy who thought he was just going fishing.

So there are 250 boats vying for this $2.5million purse, and as the 36' center-console we are definitely on the smaller side. In the marina we're surrounded by 50'+ fishing boats of various ports of origin, with various fishing and/or sexual innuendo names, and teams of matching-shirt and matching beer-gut men. We're hearing about how hot the White Marlin bite has been the past few weeks, and at this point everyone is expecting there to be a lot of competition for top prize.

Tuesday morning we're up and out of the marina by 4am, and motoring out towards Baltimore Canyon for about 4 hours, with the triple 300s blaring. Zoo is driving, we're all sacked out in the waterproof beanbags on the deck of the boat. These things are awesome, especially if you've been over-served the night before. We haven't been, yet, so it's just a nice treat to get a few more hours of sleep in. 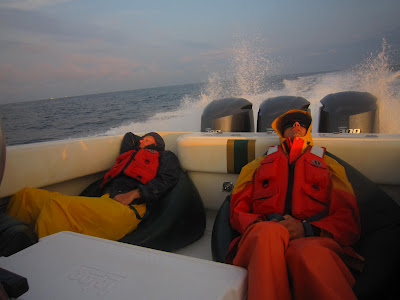 Lines go in at 8:30am and within minutes we hear other boats calling in releases. Long morning of nothing, and then Frank hooks into one a little after 1pm and fights it into the boat. We deck-check it, and it is under-size, so it goes back in. We have a few more hits throughout the day, but don't land anything else. I recall the ride back in being somewhat somber, but I was also passed back out in the beanbags for most of it. As we head under the drawbridge we run a single white marlin flag (upside down to indicate it was a release) up the outrigger. After we pull into the marina we start to look around and see that there are a couple boats with multiple flags, but quite a few of the big fishing yachts are flag-less…so we're doing above average.

Wednesday morning are we're discovering that Tuesday evening was a bad time to create a new bloody mary recipe, and a worse time to drink said recipe out of 24oz commemorative Slim Jim mugs. The beanbags were pleasant yesterday, necessary today. 8:30am and our lines are out again, and we're starting to look like a team…or at least we're not tripping over ourselves as much and Zoo seems to not be audibly sighing as much from the tuna tower. A little after 9am and a left outrigger explodes. Frank grabs it, and there's a nice white marlin on. Then our right-flat rod blows up as well, and I grab it. As Libre and Saylor clear the rest of the lines Frank's fish drops the hook, but mine is on. 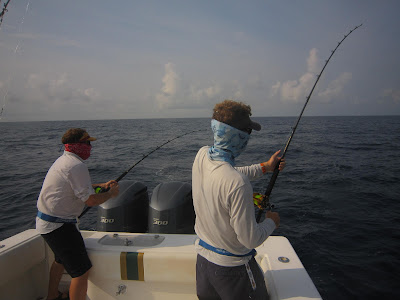 After what seemed like a much longer fight than it was, I'm sweating Tito's vodka and Old Bay seasoning and we've got another white marlin on the deck that is too short. Later that afternoon Frank adds another released white marlin to our tally, and we miss 7 hook-ups. Zoo is not pleased, nor should he be. We come in flying two upside-down flags. Same deal as Tuesday, there are a lot of boats flying 1 or 0 flags on the way in. As we pull into the dock we see a boat 5 slips down has some unexpected company: 6 US Marshals and another half-dozen Ocean City cops. Not good news. Rumors are flying on the dock, and while we never found out the exact details, the working title for this blog post was originally  "Don't register your $2 million dollar boat in a very public fishing tournament when you're wanted by US Marshalls for tax evasion, or you will be lead away in handcuffs from the dock and have your boat impounded in front of everyone." But that felt a little wordy.

So after all that commotion, and after the Coast Guard has come and helped impound the boat, we find out that after the weigh-in that night there is only 1 White Marlin on the board, everything else has been under-weight. And as it stands then, that White Marlin will win $900,000. Now we know why Zoo is distraught, we were 1 good fish away from a big win. Fuck. I'm due to fly out too early the next day to go out fishing. Double fuck. I change my flight at dinner, there's a Million-Dollar fish out in dem waters. 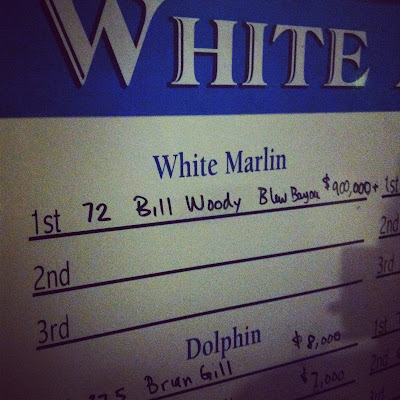 Thursday morning starts with some action, but not the kind we're looking for. We hit a few schools of Tuna and Mahi Mahi and are trying to get our lines in before they can take all our bait. It strikes me that I would have been content catching these fish on the flight down, in fact on another day these hook-ups would have been considered a good day of fishing, but not today.  The afternoon gets hot, bulas are pulled over every inch of flesh possible to avoid the sun, and we keep trolling SW in chase of the 82 degree water that they've been hitting in. We've got an iPod on shuffle playing tunes on the boat, and "Dancing on the Ceiling" comes on. "White Marlin love Lionel Ritchie" Zoo deadpans from the tower. We get another white marlin to the boat. Undersized again. Fuck. But damn white marlin are fun to catch.

We're hearing one boat over the radio that has released over 5. The 3:30pm lines-out deadline creeps up on us. It is a different kind of end-of-day. Usually it is a sunset or a trip departure that calls it, this time it is a call over the radio saying lines-out. The somber mood while de-rigging fades quickly as the disappointment over not being in the money fades to the realization that we got into a good number of fish and had a hell of a time doing so. The music is turned up, man-hugs and high-fives are given, and coors lights downed in seconds.We get back to the dock and clean the boat. Not a lot of flags flying that day, but there's still one more day of the tournament (not for us, we'd already fished our 3 days). The lone White Marlin is still on the board, and worth a lot more money per pound than that fisherman first expected.

Beers start going down pretty fast, showers are taken, and we head to "Seacrets" which Zoo tells us is the must-go destination in Ocean City. Now, Ocean City looks like a lot of kinda-sad seasonal destinations on the east coast, with a lot of half-functional neon, ferris wheels with questionable structural integrity, and mini-golf courses across the street from mini-golf courses. And a fucking "Sunsations" on every-other block selling beach crap. So, admittedly my expectations for this Jamaican-themed establishment weren't sky-high on the way there. Turns out this place is 5 acres, all covered in sand, with at least 6 different "scenes" ranging from restaurant, to in-the-ocean beach bar, to nightclub. There's a Rastafarian band lead by a fat white guy, and they are far better than that description sounds. There's also a Jamaican bobsled in the courtyard that we'd partake in, obviously.

The next morning my tiny-ass flight out of Maryland is delayed and I check the White Marlin Open standings on my phone. We're in 93rd place overall out of 250 boats. Not bad. Oh, and the prize of that single White Marlin had gone up…to $1.4million. Not a bad week of fishing for that guy.

Here's a video that I put together. The song you may not know is "Knock, Knock" by Mac Miller, a 20-year-old white rapper out of Pittsburgh who is better than that description sounds.

great read and great vid, chester! how close were you guys to a keeper?

That is EPIC Chet! Way to go! The thrillie of the skillie! Now that youve tried the blue water thing, maybe I can get you to come with me...

My typo, good catch. Slick boat and it definitely flies

Great read and edit man. I take it the Flounder Pounder wasn't in the tourney???