No Ducks Were Harmed During the Making of this Post

I can’t remember the last time I caught a fish with a fly rod from the beach, it’s been a long ass time. Maybe that’s why I’ve ignored a few tips to check out a certain rivermouth in Southern Maine until a few days ago.

In all honesty, we didn’t even go to fish, we went to surf. The NOAA weather buoy 44007, which also has a phone hotline, and in hurricane season gets more phone calls from me than family and friends do, was reporting signs of a building wind swell at sea. I was hoping to get in a quick surf – a rare treat during the summer months when the Gulf of Maine is almost always dead calm. As soon as we arrived though, it was painfully clear that the wind had been howling hard for hours and had flattened what little swell there was. The plan to surf was immediately abandoned for a leisurely walk down the beach amongst the sunbathing vacationers.

Sarah and I hadn’t walked far when I remembered my trusty 8 wt. was back in the car. I jogged back, the boards were switched for rods and we walked East across the sand.

As we approached the rivermouth, fishiness was immediately apparent. Points of sand stuck out at angles from the main riverbank creating swirling eddy lines in water that dropped off impossibly deep just feet from shore. The main channel was narrower than I had remembered when surfing here in the past and because of this, hope was immediately inspired in a trout fisherman who panics in the absence of structure and definition.

After a quick knot check on the only fly we had, I fired one out into the middle of the channel and started walking down the sandbar with the outgoing tide to get a little more sinkage in the ripping current. Probably 8 strips into the first cast and I connected with a hard jolt. The 10 foot Helios in my hand doubled over and 50 yards of backing was long gone before I could scream a few gems, double check the drag, and tear off down the sandbar in pursuit of the beast on an outgoing tide.

About 5 minutes into the fight the fish surfaced in the face of a wave and I got my first, and only glimpse of the largest bluefish I had ever seen. Almost immediately after this, my line went slack. It had gnawed through the leader, along with my hopes and dreams, and had taken my only fly with it. It was not a pleaseant scene on the beach for a few minutes afterwords and I’m quite sure that I seriously offended a large group of vacationing French people with a fit of convulsive howls and expletives.

After a self imposed time-out and some reflection on an epic battle, my horrified girlfriend convinced me to suck up my pride and walk over to the only other fly fisherman there, another Frenchman, to ask for a fly. Not only did this jolly angler give me another large deceiver after complimenting me on my “losing the fish dance” but he insisted that I take a wire leader as well.

A short while later I was back in the game and although this baby wasn't quite as big as the first, it was undoubtedly a beauty of a bluefish. 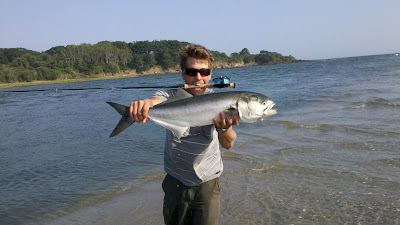 Immediately after releasing this fish, we went back up the sandbar in hopes of hooking up Sarah. Unfortunately, as quickly as they had come in, the marauding school of blues had disappeared. The last sign we saw of any activity came from a lone duck that was charged and snapped at from beneath. The duck quacked his ass off and splashed around on the surface for a bit before flying off without any apparent injuries.
Posted by Morrell at 10:50 AM

Email ThisBlogThis!Share to TwitterShare to FacebookShare to Pinterest
Labels: Bluefish, Coastal Maine, Game Changer, It's On

well i'll be! never caught myself a bluefish at that spot. great fish! keep hitting the beach my man.