As a gift to my lady friend for her birthday, I scheduled a west coast trip. Nathalia is more or less a city girl and being originally from Colombia she hasn't had a whole lot of time to travel around the US since coming to the states for college. The Pacific Northwest sounded like an ideal destination, given quality of the cities of Seattle and Portland, the scenic splendor of the surrounding wilderness, and of course that fact that my two good friends and solidhookups brethren Jesse and Neil reside in the greater Seattle area. Tickets were booked and itinerary developed. We would fly into Seattle and make a scenic drive down to Portland. After getting our fill of that city, we would return to Seattle and spend a couple nights touring the town with Neil followed by a trip out to Bainbridge Island to visit Mr. Robbins.

In reviewing the various tourist attractions of the great Portland area, it occurred to me that we could probably get away with spending only a single night in Oregon, which left me with a couple of different options, head back to Seattle early, or perhaps take a little tour of Eastern Washington. I wondered if I could potentially sneak out onto the water. After all, the Pacific Northwest is the steelhead capital of the world. It would be absolutely wrong of me to blow this opportunity at wild, river bred steelhead in the location that made them famous. I discussed this plan with Jesse and he asked a few friends at Sage and finally we arrived at booking a guide through The Evening Hatch fishing outfitters (www.theeveninghatch.com). The owner and head guide Jack had a solid reputation for running a first class operation and putting clients on fish. He owns and operates a lodge called "The Steelhead Ranch" on the Klickitat River which is a tributary to the mighty Columbia River. Now I had one last hurtle left to circumnavigate: convince Nathalia that a day spent on the river was a vacation day well spent.

Nathalia was not much of a fisherman. She had fished with me on the boat twice. The first trip was a relatively low key excursion where we pounded fluke for an hour off Martha's Vineyard. The second trip I got adventurous and tried to go south of the Vineyard in 3-5s, she got sick and we went back to the dock. I figured I would sell this trip as a scenic boat ride down the river. It would be beautiful scenery and well worth the experience. Fortunately, Nathalia was on board with little to no arm twisting and we were booked at The Steelhead Ranch shortly thereafter.

We arrived at the ranch in the evening to find most of the clients and guides still out fishing. A second party arrived shortly thereafter and it was clear that these gentlemen had been hitting the sauce hard on the way down from Seattle. We enjoyed some fishing related conversations with our new friends between their frequent trips out to the truck to hit the weed pipe and before long the guides and days' clients returned. Reports were not stellar, only one out of several driftboats had stung any fish. While disappointed I had to remind myself that we were fishing for wild, natural born steelies and that these fish were few and far between. One couldn't expect the level of action heavily stocked great lakes tributaries provide. After dinner and several beers we retired for the evening. Jack told us that our guide the next day would be Kevin. According to Jack, Kevin was the "silent type, but a damn good guide, the best I have." Works for me I thought.

Morning came quickly and we were up early still being aclimated east coast time. Ranch hand Jacob had already prepared breakfast omelets and coffee, which is a pretty damn nice way to start the morning compared to my usual breakfast when steelheading of half a begal in route to Fat Nancy's. Following breakfast, we suited up our borrowed waders, met Kevin, and hopped in his truck. He was the silent type. As we drove down the dirt road the paralleled the river I elected to break the ice with a little conversation.

"So Jack tells us you're the best guide he's got."

Kevin looked over at me with confused eyes. "He said that?"

"Well he really shouldn't have said that," Kevin relied. "Not really professional." A long pause.... "But yeah I am his best guide. I'm actually probably the best steelhead guide in the state."

Well then. Glad we established that. Unsure what to say to that kind of statement I just nodded my head in agreement. Kevin certainly looked the part. He had a golf ball sized wad of Copenhagen in his mouth and was spitting onto the floor of his truck. No spitter needed. He looked legit. Maybe he was the best steelhead guide in the state...

Kevin had a plan. He told me the river had been really slow, but he was hitting fish in one specific spot. We would launch well up river and spend the first hour shooting straight down to try to get ahead of any other boats. We would focus our attention on the specific stretch of water that had held fish. That was Kevin's plan. We're we good with that he asked? Damn straight we were good with that. When the best steelheader in Washington State has a plan you don't deviate, you just go with it.

Boat launch went smoothly. We got Nathalia acclimated with standing in the water wearing waders. I had almost forgotten how wearing waders for the first time is kind of a cool experience. Just standing in a river and not getting wet. Shortly thereafter we fast on our way down current. In between wads of dip and strategic back paddles Kevin rigged up two rods. Seeing this, I told him that Nathalia and I had a plan too. I would hook a fish and then give her the rod to fight it to the boat. We really only need one rod I told him.

"Naw, we'll get her one of her own" he said. Kevin had a better plan.

After a few miles of river, Kevin slowed the boat and dropped anchor. "Keith, get out, walk 15 yards up river, and fish that run." Ok. I made my way up to a very fishy looking run with good current and depth. Kevin had rigged up a double rig with a large pats stonefly 18 inches above a bead. I nymphed the shit out of that run while Kevin showed the ropes of fly casting the Nathalia. A few things happened during the following 20 minutes; I landed a very impressive looking 9 inch rainbow and Nathalia learned how to fly fish. On the drift once more, Kevin had her casting like a champ. He would shout commands like "Cast left. Once more, little further. Good, now mend up river. Pull in two feet. Good line. Let it fish." These commands were followed shortly later by a loud "Set!". And soon thereafter the score was tied 1-1. Nathalia's native rainbow was a wild jumping fish that may have eclipsed the one foot mark... Good start.

This is how things proceeded for the next several hours and several more rainbows, steelhead smolts, and whitefish fell to our combined efforts. I continuously asked Kevin if we were at "the spot" to which he continually replied "not yet." We stopped for lunch, and then we kept fishing. The runs on the Klickitat were beautiful and I found it hard to believe that we weren't hitting fish, but then again, that's steelhead fishing.

Kevin asked for our setups to re-rig. Apparently we were nearing "the spot".

"What are you going with?" I asked.

"Because that's all they'll eat."

Ok then. I wasn't sure if I should be skeptical or instead ask why we weren't fishing red copper johns all day if in fact that was all that they would eat. Instead I stayed silent. Our next drift took us through some very sexy looking steelhead water. Good current, moderate depth, rocks. It reminded me of the refrigerator hole on the SR. It wasn't long before Kevin yelled "set" again and Nathalia reared back on a big fish.

"That's a steelhead" Kevin said. "Remember what I told you to do. Let the line slide through your fingers and fish it from the reel." The fish bolted up current dumping quickly into the backing. 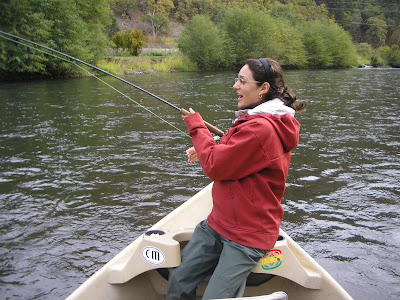 I can't really do justice to a steelhead fight by trying to describe it, but lets just say this steelhead did what steelhead do, and our guide operated that dirftboat like a champ. Before long steelhead number one was in the net, and this fish was no slouch. Every bit of ten pounds and colored up beautifully, this was a steel to remember.

"This is the spot." Kevin said after removing the red copper john from the fishes mouth and releasing him back into the current. 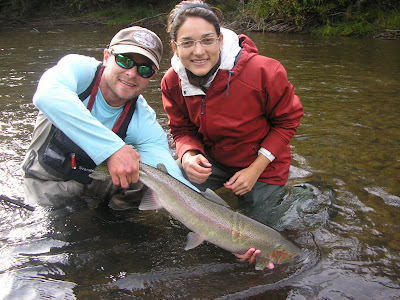 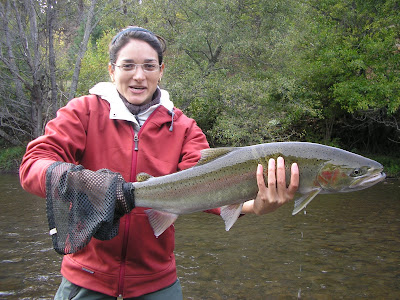 Well, now that we were in the spot and the steelies were hot for red copper john's it was time to get down to business. Kevin rowed back up current and set the anchor alongside the run. We made drifts along the same seem and it wasn't long before the next indicator dropped. And again, it wasn't my indicator! 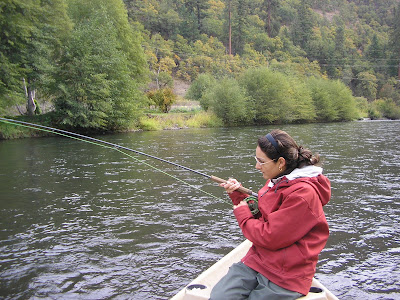 This second fish was a beautifully colored up male that again fought with every bit of craziness that a wild steelhead could produce! Instead of running upstream, this fish shot down stream with Kevin rowing quickly in pursuit. At one point Nathalia asked me if I wanted to reel that one in. I told her there was no way in hell that was going to happen. 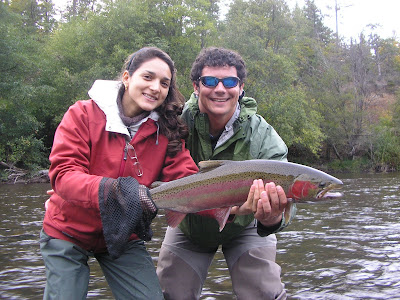 After release number 2, the good Dr. Steelegood finally did get on the board. My prize of the day was a spawned out female that fought like a wet towel. She did not even compare to Nathalia's two fish in either beauty or courage, but it did feel good to get my first wild steelhead. After my fish, we called it a day. 3 for 3 on klickitat steelhead, all at "the spot", all on red copper johns.

Back at the ranch, we exchanged stories with the other clients and told them about our successful day. I bragged a little bit about our boat's lead angler as we returned our waders and packed for the drive to Seattle. As for the other anglers we spoke to, no fish landed, by anyone, all day.

So in short, my novice girlfriend outfished the rest of the steelhead ranch. Not bad. And by the way, if you're looking to do a steelhead trip in Washington, talk to Kevin. I'm now pretty sure he's the best damn steelhead guide in the state... 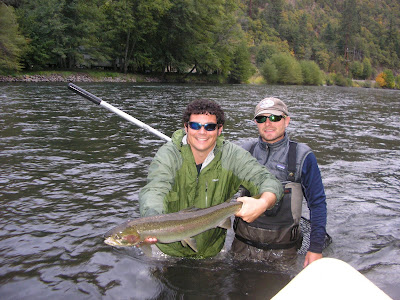 Amazing story, congratulations to your Lady Steel, I for one will give the copper john another look....8 days buddy

"Ok then. I wasn't sure if I should be skeptical or instead ask why we weren't fishing red copper johns all day if in fact that was all that they would eat."

great pics dr. and great to see you.

Great read bud. I guess it takes a lady's touch to out fish dr. steelgood on the water...