The other day I arrived home to find a package on my door step. Hmmm, I thought to myself, this is either the Moldcraft Senior Wide Range I ordered from Melton Tackle to replace the one that remains lodged in a pissed off blue marlin's bill or the sleave of tobacco-less Mint Leaf chew I've been using since I quit the real stuff on September 11th. Either way, I was excited to recieve this package.
What I found was that the package contained neither of the above two items. With a return address of Seattle Washington, I knew this package was from either the great S Neil Larsen or JACK Robbins of the Long Rod. Its contents were quite exhilarating. Mr. Robbins had acquired an image of the OI at work on the high seas from a blog post I made earlier this summer, and had a canvas print made of the image. The quality and detail were startling. I could see the daunting presence of Sawyer straddling the hull, his watchful gaze fixed on the spread, while the old man nurses a healthy and evident lip bulge. The stone cold First Mate's hollow eyes were clearly visible as he surveyed the damage a wahoo inflicted on a widerange moments before the shot was taken. To say that the canvas print was anything other than exceptionally detailed and crystal clear in appearance would be a falsehood.

Thank you Mr. Robbins and thank you Easy Canvas Prints (http://www.easycanvasprints.com/), for putting the "MAN" back into my mantle... 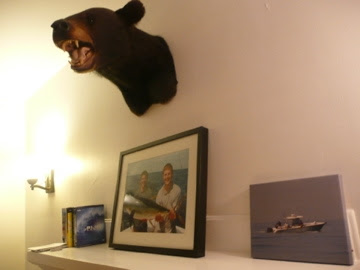 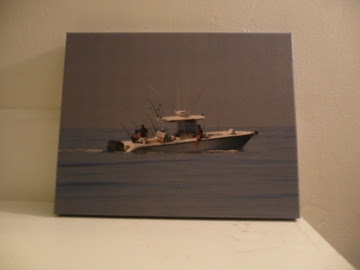 i only wish i were in the photo

This daily deal website fab.com has an incredible deal going for Easy Canvas Prints right now. You have to sign up for the site, which is free and has cool stuff from time to time, but it is worth it.