Fishing with Bob from Texas

A collection of quotes and antics from this week's fishing with Bob from Texas:

Jesse: "Nice cast Bob, let this one drift."
His flies drift through a nice hole, no strke.
Bob: "Wow that was a nice drift! Nice drift Bob!"

We've just finished a morning of fishing and are about to head back to the truck when I spot a fish.
J: "Hey Bob, I see a fish there, you wanna try a couple more casts?"
B: "Yea sure!"
J: "OK, this fish is..."
Bob walks past me by six feet spooking the fish.
J: "...OK, cast on the left side of that main flow, right in the seam.
Bob makes three casts.
J: "Oh, woops, the fish just spooked, oh well."
B: "Oh yea I saw him take off there!"

Bob snaps a fish off by not letting the fish run.
B: "What happened?"
J: "Um, well, sometimes the line gets stressed after you've hooked a bunch of fish."
B: "Yea! I like that! I fought so many fish that I wore the line out!"

Bob breaks another fish off.
B: "Well Jesse, put another twist in your knot next time!"

At the end of this morning's trip, my last trip of the summer and perhaps the last official guide trip for a long while, Bob lands a nice brownie on a since 24 pheasant tail. We shook hands and exchanged smiles as Bob reeled in.
J: "Well Bob, that's another great day of fishing!"
B: "Well Jesse, only people with bad attitudes have bad days fishing."

True that, Bob. Nice fishin' with ya. 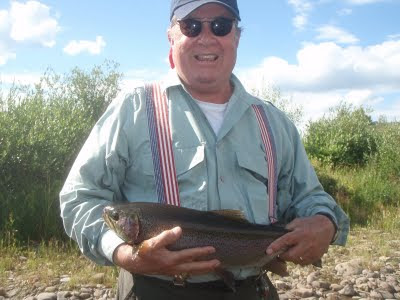 Email ThisBlogThis!Share to TwitterShare to FacebookShare to Pinterest
Labels: Bob, Fishing With, On The Ranch