Since Captain Lane started venturing offshore to the canyons, I have been envious of those fortunate enough to join him. Living on the west coast for the past few years has prevented me from getting in on the action, which, as evidenced by the content on this blog, has been quite solid.

A few weeks ago, a family wedding just north of Boston got me out east for the first time since 2009. My girlfriend Tina and I decided to made a week out of it giving us time to visit Boston as well as the Cape. Midweek, Poseidon provided a glorious weather window for a run down south. Keith made the call - it was finally time to see for myself whether the canyons lived up to the hype.

As the video below shows, the trip was a rousing success. The bite was comparatively slow, but the weather was perfect. Tina caught her first fish ever, a 60 lb white marlin during the afternoon troll.

On the night drift, Keith hooked up on something very large one one of the chunk lines, but within minutes the fish had managed to wrap all 5 lines, creating a massive tangle that nearly spelled disaster for the trip. After the fish snapped off (we were unable to hand line it in), Keith assessed the damage. He was able to salvage all but one of the rods by jury-rigging new top-shots. By morning we were back on the troll. We snagged 5 yellowfin about mid morning, but nothing else. Even some mahi that we spotted loitering by lobster pots were unwilling to bite, so we wound up are lines and headed back to shore. 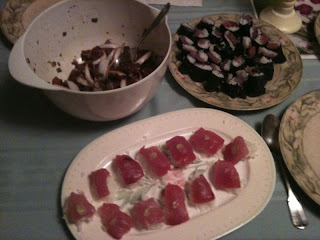 We ended our trip with an Ahi sushi and poke feast at Jgromma's pad in Cotuit, followed by the usual antics one would expect with such a crowd.

Thanks again Captain, you gave us an experience we won't soon forget!
Posted by S. Neil Larsen at 10:40 PM

hell yea s. i miss that lane sushi. we'll start filling our coolers in the pac nw in a few weeks. silvers should be in.

Neil, I've been waiting for the post my man. Sick trip, wish I could have joined