This fishing story actually begins last season, and maybe even several seasons ago...
We have a neighbor down on Cape Cod named Paul. Paul is a really nice guy who likes smoking cigars and watching Patriots games. Paul and his wife Barbara have twin sons who are 15 years old, Mike and Alec. Good kids. Mike and Alec like to fish.

Over the past several years, Mike and Alec, and occasionally Paul, would stop by our dock to view the various catches of fish that we'd unload after a day or two at sea. The contents of the fish box would vary, occasionally we'd bring back striped bass or bluefish, but more often than not we would unload bluefin tuna, yellowfin tuna, big eye's, mahi and even swordfish. The boys would always ask how we'd caught so many fish and lament the fact that their fishing trips were always markedly less successful.
Over the years, the legend of the OI grew, and the boys next door wanted to catch some fish, badly. So last summer, I offered Paul and the boys a trip out to the canyons. We scooted off to hydrographers and put a hurt on the yellowfins, loading up the boat and releasing numerous 50 lb fish. Mike and Alec were quite pleased with tuna fishing and I was pleased that they were pleased. Fast forward three months, and Paul is signing a deal on a new 34 foot express sportfishing boat.

Now would Paul have had to cough up several hundred K for a sportfishing boat if he didn't happen to move in next door to me? Well, on that I can't quite be sure. But for some reason, I suspect my existence may have had something to do with it...

Last weekend Clark and I joined Paul , Mike and Alec on their new boat for its maiden voyage offshore. We decided to stay somewhat conservative and fish off Chatham. Oddly, I felt a lot of pressure to find a fish on this trip. I really wanted Paul and the boys to get a fish on their boat, to proved that the offshore investment was worthwhile.

As is typical with Chatham bluefin fishing, there were more boats than fish on Sunday morning. Out of a fleet of 30, 5 boats hooked fish during the early morning bite. We were not so lucky. By 7am, there was a lull. A horrible, "damn we missed the bite" lull. I sought less crowded waters and pointed the bow southeast. I cracked a bud light. Clark and I discussed his habit of ignoring his first mate duties and instead napping. I called him a pussy, but he countered with a salient point,
"We always hook fish when I'm sleeping Keith."

"That's because you're always asleep, you bum. It's inevitable."
"No. You know why we always hook fish when I'm asleep?... Because my dreams become reality..."
And at that moment, as I began to laugh at Clark's striking logic, we got a bite.

And what a bite it was. No one saw the fish hit, but hit it did, and it ran deep into the backing. The fish ran across the spread and tangled one line as we attempted to clear the other squid rigs. The spectre backing burnt right through the 400 pound test mono of the tangled spreader bar like it was nothing and we retrieved what was left of the rig. Lucky break number 1. Paul was suited up to fight the fish first. 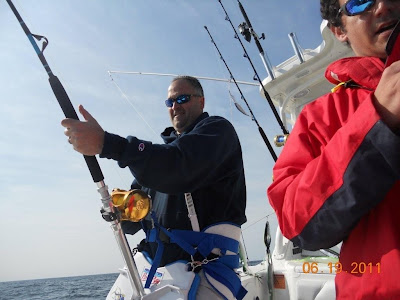 This fish was mean. He was strong, he was mean, and he was clearly unhappy that he had been hooked. I took the helm while Paul lost the majority of his backing. Finally it became apparent that I would have to back down on the fish. We spent the next half hour with me in reverse as Paul slowly gained back his line. About the time the mono was nearing site, Paul got nervous. You see he too, was feeling pressure to get a fish on his new boat, and he wanted a professional on the reel. And who better to fulfill this need for a professional angler than Sleepy Clark Winchell?

With OO Steele on the rod, the fight commenced anew, only now we weren't backing down on the fish, and the silver leviathan found a new reserve of energy. With drag up to full, the fish refused to budge.

Clark "My Dreams Become Reality" Winchell, giving it every bit of Bates Soccer quad strength. The fish matching his every pump with a run of its own.

Deep slow circles, Winchell sweating like a fat kid on a StairMaster. Finally color under the boat, but sensing impending death, the fish made a final move. An 80 yard run directly under the boat, line rubbing against the hull, Clark made the smart move and lowered the drag to prevent a break off. Finally we were able to spin the boat and resume the battle, this time the line returning to the reel frayed and covered with bottom paint. Lucky break #2.

The drag again pushed up to full, the fish is beating OO Steele. His hands are bloody and his legs ache, the fish is circling 60 feet under the boat refusing to budge. We are an hour and a half into the battle and I realize that the fight has to end now, or it will end in defeat. I implore Clark to give it everything he has and turn the fishes head. "LIFT THIS FISH! LIFT THIS FISH!" Clark utters a painful guttural sound reminiscent of mating deer and leans back with everything he has. Again he pumps, now screaming. With each crank we gain a foot of line. I implore him to continue. He reminds me of a marathon runner giving it everything he's got during the final mile and then crapping all over himself as he crosses the finish line... Finally the double line is in sight. I grab hold of it, then get the 400 pound main line. Paul sinks the gaff in the fish.

A heave-ho over the side and the 81 inch 300+ pound bluefin is in the boat. Paul and the boys are elated, having tasted tuna victory on their own boat, I am relieved, having found a fish, and OO Steele is beaten and wasted lying on the deck like a rape victim.

When most people refer to a fish that gave an epic battle, they're usually referring to the number of times the fish jumped or how far it ran, or maybe that it got wrapped around a rock and needed some crafty angling to free it.

When I say that I witnessed an epic battle, I'm referring to brute physicality, a man with a rod, 30 pounds of drag, and a good set of balls, going toe to toe with 300 pounds of aerodynamic water pumping muscle.

I witnessed an epic battle that day, and the winner was Clark Winchell. 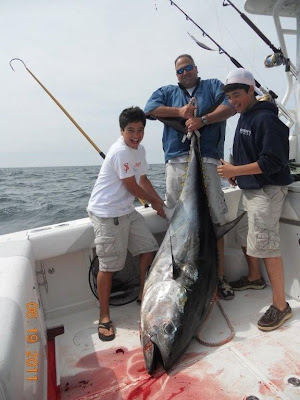 YES Keith! This post got me so pumped up! Excited to make an appearance on the OI soon my friend...

i am pleased to read this epic. well written captain, nice to hear from you again.

This god my adrenaline pumping man. Felt like reading the Iliad of Tuna fishing. Keep the ocean stories coming! I can practically smell the salt

Tuna Victory, the sea is firmly on my mind, I will be on the boat very soon