Ok so here’s my first post on the BFC blog. As an ’03 grad I’ve been away too long. After a couple of flyfishing excursions in the past with none other than Mr. Lane and Mr. Garling I’ve recently been hit with the fly fishing bug and the BassPro Shops down the street has been stealing away some of my tuition money. I have been hitting up the local rivers out here in Southern California along the Sierra Nevadas. Year 3 of vet school was done, and my roommate Joe and I decided a camping trip on the Kern River (Kernville, CA) was completely necessary. The last time we were here it was cold, raining, hailing, snowing and miserable. We only picked up a couple fish with water temps in the low 40s. Although this weekend did bring a bit of the same weather, most of it was manageable and we hooked up some decent rainbows during the daylight while imbibing with the traditional Bud heavy and Makers by the fire at night, which eventually turned into juvenile antics with exploding soda cans in the fire.

Joe and I were looking to get into some of the famous trout this river is known for, the golden trout, but the reports for fishing higher up on the river where they reside were not good so we stayed below and fished for the stocked rainbows. The river was really high and fast that weekend so anything besides roll casting and sling shotting was close to impossible with the brush and trees right up against the banks. Stone flies are known to always work well here which was what we used initially, but we met a local fisherman on our first day and he keyed us in on a working pattern, a green leech  with a “kern kandy” pink trailer to drop into the deeper pools along the edges.
It worked for us all weekend and it produced this guy here, the biggest fish of the trip. Picked him up dropping my line behind a nice big boulder on the edge. And yes this is my biggest rainbow on the fly…. I know it’s no trophy but it felt real good to pull this one in. As you can see I’m still trying to figure out photo logistics. (notice the oldschool Bates hat making the trip!) 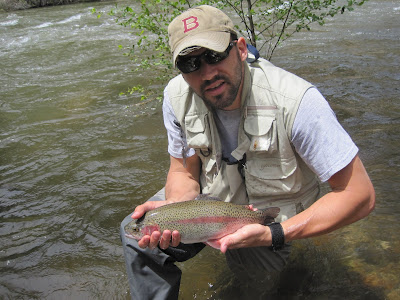 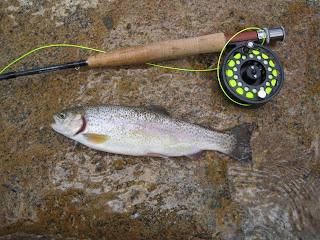 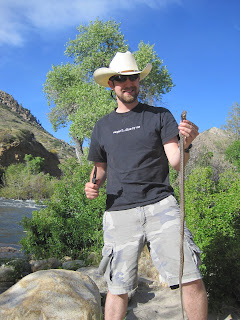 I’m really glad to put in my first entry here, hopefully there will be more to come as I do a bit of camping and fishing next year as I drive around the country for rotations. I’ll be in Boston for six weeks beginning in October. Hopefully if scheduling allows I’ll get to meet up with some of you guys while I’m in town. It would be great to catch up while hitting up the local watering holes that serve both beer and fish.
Posted by Jeff Critchlow at 6:59 PM

Critch, never too late to catch the old fly fishing bug my man; glad it finally bit you. As for claiming your fish are lackluster, I would have to say you've produced some high quality beauties there. Good on ya for tapping into some local intel as well, seems it did the trick for you gents. Looking forward to seeing you in the fall brother.

hey critch, great read man. glad to hear you have been getting on the water. stick with it man, we'll have to get on the water together soon. if you find yourself in or passing through colorado this summer shoot me a line.

Jeff, that is hardcore. Great looking fish too. Whiskey has led to a lot of wild things in my life but never snake eatin'. A tip of the cap to you.

yeah it's been a fun start to fly fish out here, only wish i had more time to enjoy it. ...and I swear that "big one" i caught looked bigger in person... always does right? I'll be probing you guys with many questions in the future i'm sure.

For some reason I bet that isn't the first time you've had a black snake in your mouth...