First time at the SR

A lot of you don’t know me so a quick introduction – My name is Sam and although I didn’t go to Bates (went to Bowdoin), I have had the fortune of fishing with Keith Lane and several BFC members over the last couple of years. I thought I’d write a recap/observations about my time on the salmon river in Pulaski. Ive done a good amount of saltwater fishing, but my prior freshwater fishing experience has pretty much consisted of trying to win my town fishing derby when I was in elementary school, where a 20 inch pickerel was usually the fish of the day. I have talked about doing one of these steele trips for 2+ years, and when Keith said he was heading to Pulaski I didn’t think twice about driving 370 miles from Baltimore.
After checking out the scene on Friday night, we woke up about 3 hours later to get me a license and hit the SR. We rolled in about 30 minutes before first light and we wander through the woods to claim our spot for when fishing legally begins at first light. When the sun rose, this is what we were dealing with…. 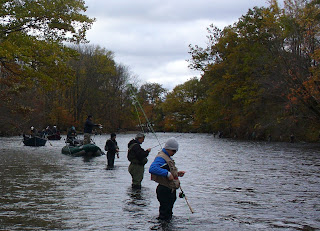 The number of people there by first light was mind blowing…literally a person every 3 yards on either side, coupled with boats and other fishermen 30 yards across on the other side. The fishing also looked crazy, big salmon busting out of the water. A moldy half dead salmon crashed into my leg and startled me– these were apparently everywhere at this point in the run (I had no idea).
It was a rough morning – Keith snapped his rod, I lost a glove, and some people decided they would stand behind us and cast over us. Even though fish were there, our first spot was too crowded to fish. We hiked around and drove to a different spot but the whole morning was pretty uneventful. We needed to get back into the fish.
We ended up waiting for a spot a bit upstream from the bridge where there seemed to be a bit of action. All salmon though. One fisherman said “a steelhead was caught Wednesday.” Not encouraging for the steele outlook, but at this point we wanted action. We worked ourselves in when someone left and BOOM-keith gets a fish on. It is Steele. 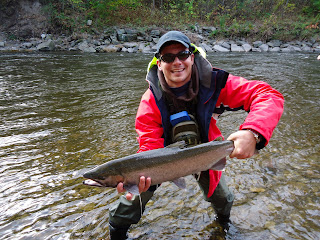 I was pumped to see the steele. Shortly, I got my turn to do battle. A fish hit and as it ran to the other side of the river, half of my rod (keith’s rod actually) detached and fell in the water. I knew steele were hard to land, but it became a lot more important because if the fish broke off we’d most likely say bye to the rod. Luckily, the fish ran a bit back towards me and we brought in the rod and the fish. 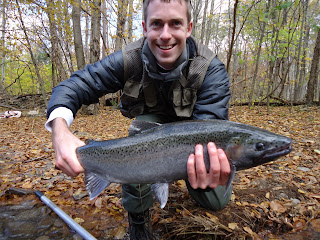 I don’t know how keith does it, but he seems to defy the odds catching steele while everyone else was catching salmon. From that point on, the fishing was pretty solid. Keith landed another steele a nice salmon, and a brown while I had the experience of getting manhandled by a large fish that made me chase after it but got in the current and wasn’t going to be stopped.
Quick recap of Sunday - Along a row of 10 people near me, I’d say 25 fish were hooked in the first hour and a half of sunlight, and the majority of those were hooked by keith. The fish liked the chartreuse. However, our ratio fell dramatically from day 1…I don’t think I landed a fish all day personally but had some good battles.
I came for 2 things (1) land a steele, and (2) get abused by a fish…both of those things happened. Pumped to do it again. 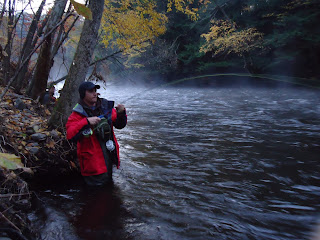 Sam, excellent post. Several of us here on the blog have actually just returned from the SR. Three men on this trip were SR virgins, and encounters with steele and Pulaski natives have left them desiring more. The experience is entirely unique. Let's plan a trip for a late November weekend...

sam, great read. any first voyage to the salmon river is an eye opener in many ways. glad you got into some steele. like keith said, we just got back ourselves and got a few to bank. hope to see you soon man.

Sam, sweet post. Keith always smells like Steele...he prefers it. I think he should start his own line of lead weights; people would buy them.....I would buy them.

The key isn't the weights, its in the treble hooks I use. I get the kind with the extra big barbs.