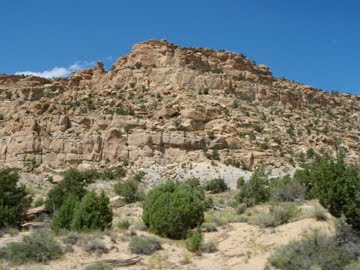 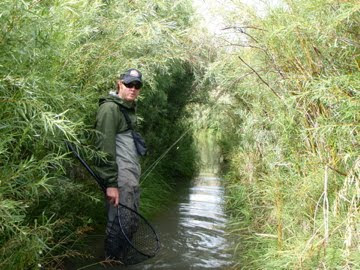 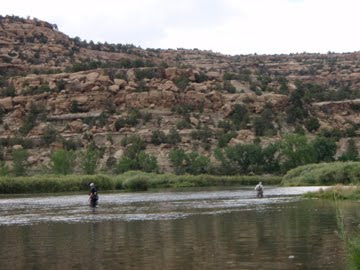 We rolled south and west from the ranch, through Durango, into New Mexico to the township of Navajo Dam. There, we would find the famed San Juan River. In Durango, we stopped at Duranglers for licenses, directions and just some general information. We were again faced with brand new water and would take any advice we might find. We spoke with a few fellers and it seemed like we already had the right flies. Pictures on the wall confirmed that large fish lived in the New Mexican water.

When we inquired as to water temperatures, we were very surprised to hear that the river runs cold through the summer. 42 degrees five days ago, we were told and I had left my waders at home. So I'd be cold, there was no doubt about that. 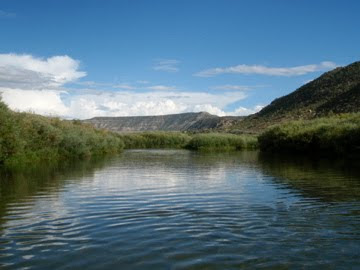 We finally got sight of the river and found access. The water was cold, but doable for a couple hours at a time. Rising fish greeted us as we stepped into position, no less than 15 drift boats around us. The first half an hour was filled with What are you using's, There's one's, Shit's, and other brief bits of conversation as we tried to figure out what was going on. I was fishing a side channel to rising fish and got a take and then another on a surface emerger. It was a nice brown and we were on the board. 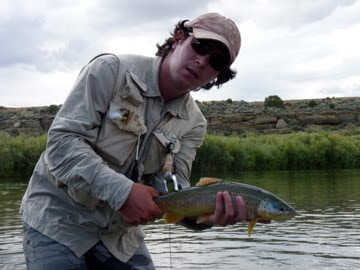 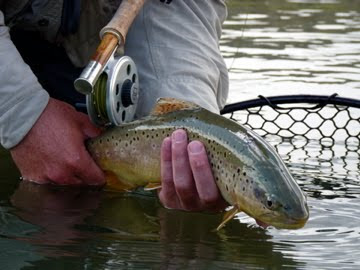 I picked up one or two more over the course of the next couple hours, but no flies were consistent and after sending countless drifts right over the top of feeding fish to no avail, it was clear the three of us were doing something wrong. A storm came in, sending us off the river to wait it out. We entered a fly shop to look for more advice. We told the guys what we were using and how we were using it and then an older lady walked over to us, looked us in the eyes and said, "That's not how we fish this river."

So we bought some flies, got some more information and hit the water again. It was a similar scene on the river when we returned, save for all the drift boats, which had left with the storm earlier. Rising fish in just about every direction. We all experimented with combinations of midges, emergers and tiny dry flies. Again, nothing was consistent. I picked up a couple on a size 26 parachute adams and Boone stung a couple on various midges.

As the sun went down, my numb legs had had enough and we made our way back to the vehicle, frustrated, pissed, yet somewhat content and excited, all in one. 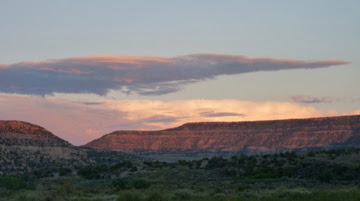 See you next weekend, Juan.
Posted by Jesse Lance Robbins at 2:16 PM

Spent some time in Durango back in the day when I did a bike trip in the San Juan's. Sweet area! Thats a pretty solid Brown you got there, did you guys nymph at all? Sounds like there were no lack of fish in the river; I'd wager you will have it figured out by trip 2.

Nice Robbins! Hopefully we will catch up this Fall.

Duh, Robbins! They call it the San Juan worm for a reason...

ayuh guy, give it a lil ol' twitch with that red yarn fly and whabam!