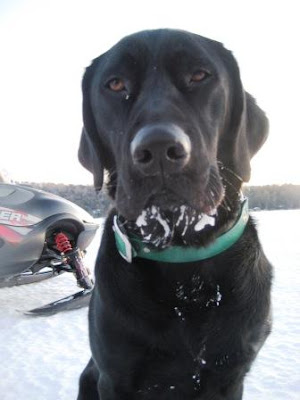 My father and I struck out on our usual Sunday ritual of fishing Great Pond. I was at my folk's place by 5:45am, we unloaded the snowmobile, dogsled, and gear in the darkness. Our freighted sled cruised slowly across the ice; we arrived at the shack well before sunrise, with a distant orange glow on the eastern horizon.
Holes drilled, traps set, we were unquestionably the first group out on the lake on the -2F morning. We were a few games of cribbage into the morning and had a couple 7-8lb Pike on the ice....then it happened.
It was 9:15 am, I had been methodical about checking the traps every five minutes. I poked my head out of the warm embrace of the shack and discovered one of our closer traps had sprung a flag. We shouldered our coats quickly, and were soon standing next to the ice covered hole. As I looked down into the water I could tell the fish had completely spooled the reel and the only thing holding the fish in place was the last loop knot fixed to the spool. We made haste and were soon battling the beast. Usually these Pike will hold off on their big runs until they near the hole, see the light of day, and decide to burn off 30-40 yards of line, this fish was an exception. It ran a mere five yards into our retrieval and continued to make heavy runs throughout the entire battle.
After 10 minutes of dancing around the hole and shifting lines to prevent tangles, we finally saw the head. I was sure I was looking at a state record as the head and body slowly rolled by the hole. A few runs later we managed to turn the head up the hole, and I gave it the old Wilkie death grip just below it's gills as I hoisted it onto the ice. A quick glance showed a nearly straightened hook holding gently on a tiny piece of flesh in the corner of the pike's mouth. I tugged it ever so lightly with my leatherman and it popped free. There was zero margine for error, we had just landed a family best, and probably the largest Pike to come out of Great Pond for several years. The fish measured 44.5" and weighed in at 25.6 lbs on two different scales. I was so stoked that I put both of my fists into my old man's chest and knocked him flat on his ass...ha 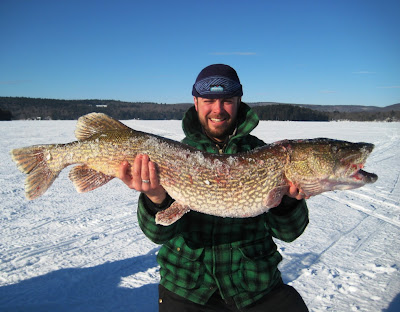 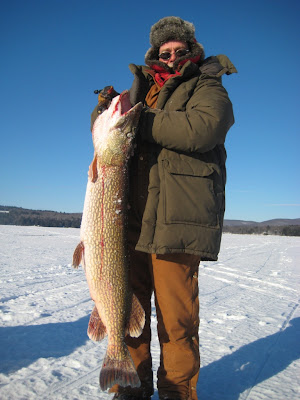 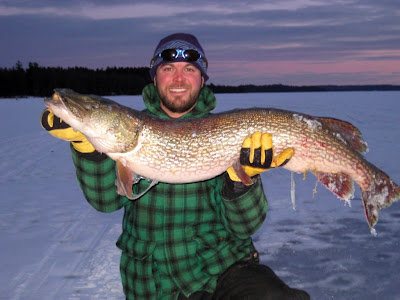 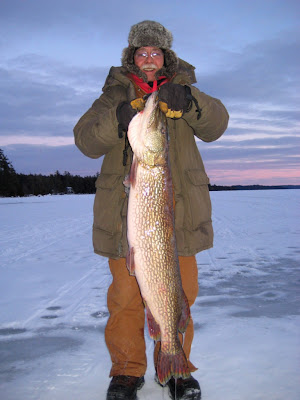 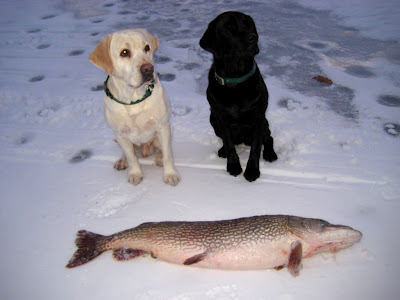 The fish goes to the taxidermist this week, and will be ready by this upcoming summer for your viewing pleasure.
Posted by Andrew Wilkie at 8:45 AM

Email ThisBlogThis!Share to TwitterShare to FacebookShare to Pinterest
Labels: Northern Pike, On The Ice, Solid Hookups

What a beast! Clearly that fish hadn't planned on an encounter with two generations of wilkie's. One generation, he might have broken free, but not two...

Damn.
That is only the third time a fish has given me wood.

I have, however, knocked your dad on his ass a bunch of times.

wow, that fish is pretty awesome wik. well done on that fight through the ice. i'll have to make plans to join you in that pursuit soon...

Whoa man, nice arctic alligator gar. For shit's sake, fish like that aren't supposed to come through a hole in the ice! Makes me nostalgic for coffee brandy and ice antics. Can't wait to see the final mounted product.

i have a memory of a day on the ice. sobriety was compromised yet attention was high as a flag was noticed. a fight ensued and soon a beast lay upon the ice. i will never forget that day, as i imagine big and little wik will never forget this one. i miss the ice, but will see it again, i know. thanks for the story my man.

Did you just write a love letter to frozen water?

(Jesse later returned to the US, put on his cleanest shirt and drove out to Moosehead Lake—the site of so many memories.

After walking out beneath the blue moonlight, he stooped, kneeled, took out his portable drill and wooed his frozen princess.

After making love with much tears and passion, Jesse took his laptop from his truck,set out a blanket, and he and the lake stayed up, holding each other and watching The Notebook.)

What? It's a slow day at work.

dude, i was nearly in tears laughing when reading your comment

That is serious business right there. congrats wilks.