I had just broken my spell of four fishless days. I stung two great fish back to back in the beginning of the day and I was feeling great. Prior to that I had gone four days of spooked fish, errant casts, curses and frustration.

The main stem of the river went to my right and a smaller stream went to the left. Another hut was located up the main stem a mile, a sign said, so I decided I would check out the hut and see if I could see any fish in any of the pools along the river. I crossed a high bridge, a bridge that usually allows for the spotting of one or more fish below. But this time I could not see any fish. I shrugged in surprise and continued on. I had had a great day on the water already and was hiking more out of curiosity for the hut, than for the fish. But my focus would soon revert back to the water.

In the next pool I saw a large fish feeding. I cast to him several times but couldn't get a good drift and continued on. The next pool was the same sight, except this time I got a good cast and a take. The fish took me downstream for 500 yards or more, into my backing and brought me close to water that I did not feel like wading into. I gained a lot of line back but the fish was still holding tough in the middle of treacherous water. Then the hook pulled. I looked at the water, then looked upstream, saw another pool and decided I would look to see if there was a fish in the next pool.

I reached the next pool and stood on the bank looking for the fish that I seemed to know was there. And there it was. I made two or three mediocre casts, then a good one and the fish took. I stung him good and we battled. The fish went into strong current and I had little control over the fish but I did still have line tight. Across the channel and back he went, two, three times. I had him leadered twice and he would run again. He had me follow him across the river three times. Into side pockets, down the bank, up the bank, into a side channel and out again.

My forearm tired but I knew he was hooked well. Finally I had him close to some dead water. I knew if I could get him into that dead water, I would be able to grab his tail. The fish tired and I lead him into the current-less pool. There, as the fish rolled onto its side and I touched its tail for the fish time, I saw how big he was.

This was the fish in The Next Pool: 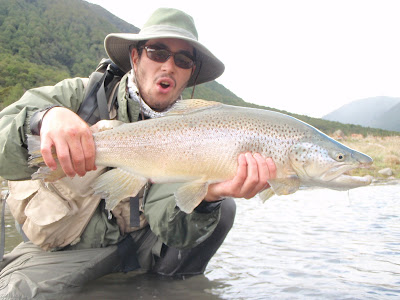 Shittarded...Glad to hear you're working on your mountain goating skills; it seems it may be paying off :)

Can you say beast? It's very rare that I see you posing with a fish more hansome than you are! Good work Port Steele.

I don't know what's better, that hog of a brown, the pencil thin moustache, or the story.

Keep em comin man. Between the reports from both hemispheres we got ourselves an endless summer

this is the same guy that after catching his first trout at the age of six, came out with the famous quote,"I wanna catch another one"