After four trips to the Salmon River chasing Steelhead the crew decided that it was round about time to chase the fish that was River was dubbed after. Being armed with a new 8wt I teamed up with Keith and Clark for this adventure; we were sad that Jesse, one of the original crew. would not be able to join us on account of his departure to New Zealand. We would forge forth in his honor seeking the mighty King Salmon.
Salmon season is a shitshow, we knew this, and a lodging booking placed one month prior to the trip only scared up one available lodge, Salmon Heaven. The joint was located in Altmar in the upper region, some 100 yards from the bank of the Salmon River where the flows were as low as we had ever seen them (325 cfs.). We arrived at 11 p.m, slid into an upgraded suite above the tackle shop, and promplty walked across the street to the sketchy Altmar Hotel Bar. After a plethera of drinks and other sundries, we stumbled back into our suite around 3 am. The night would not end there, for we had salmon on the brain and there was danger in the air. Clark and I retired around 4 a.m; Keith would not slide into his bunk until just after 4:30 a.m for the smell of salmon was too much for him to bear. Alarms were set for 5, and on account of the nature of our evening we rose around 6:45. We were in pain, serious pain, the kind of pain where you could potentially sleep the day away questioning the previous evening's events. We hadn't come for such things however, and in a seriously questionable state we rose, headed for the tackle shop, and soon arrived at the Douglaston Salmon Run parking lot where a "Sold out" sign greeted us. No matter, we had purchased our passes online ahead of time and were soon waist deep in the gentle riffles of the DSR.
People were tight all around us, the banks of the Salmon River were lined with anglers even in this $30/day section of the river. A furry of excitement overtook us as we jockied for position in the various runs of the river.
Soon enough Keith had gone tight several times, and I was not long behind him. All of the fish were lost. Hangovers were taking hold, and spirits, while not defeated, had some serious chinks in the armour.
It was Clark who struck first with a Solid Hookup and he battled the fresh 15lb Salmon to the bank. The skunk was off and the Salmon were running. 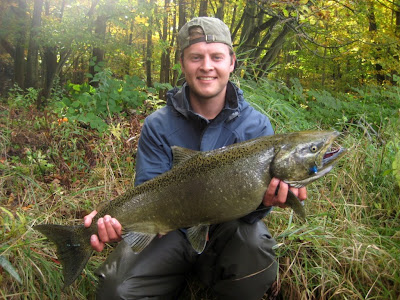 As the daylight wained Keith landed his first hen of the trip, a nice 16-18lb specimen. I however went 0-5 during the majority of the day and managed to slip into a primo run some 30 mins before the sun set. As Clark gathered the fish and our belongings from the river's edge, I was tight. Keith, net in hand came to my aid and watched as the fish made quick work of me, spitting the hook on a screaming upriver run. In the next 20 minutes I hooked another 4 fish, 3 on consecutive casts in this run, and each of them threw the hook in the same fashion. At the end of day 1 Keith had gone 1-5, Clark 2-5, and I had managed an astounding 0-10. I was less than happy. 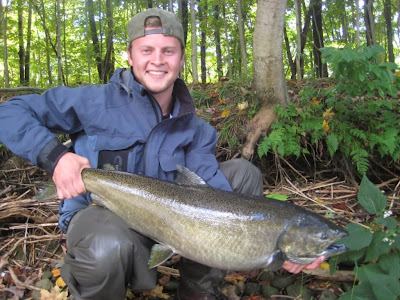 (Clark's 2nd Fish)
Day two was another trek to the DSR (Douglaston Salmon Run) and I made quick work of ridding the skunk with a 22lb hen. 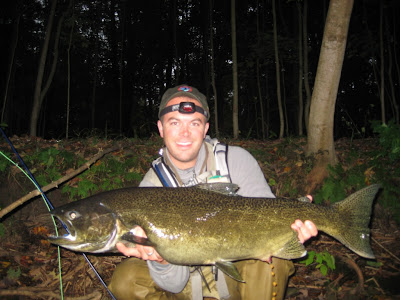 Keith followed this fish with one of his own, a similar sized hen. I ventured off to do some downriver scouting as the run of fish slowed. On my four or fifth cast I connected with my first Steelhead of the season; a fish that I neither measured, photgraphed, weighed, nor netted. The fish cleared out a dozen or more anglers with a 50 yard run upstream and downstream of where I played the fish. Twice I had him to my feet, but with the net upstream I realized a true landing/photo session was not in order. As I reached down for this metallic beast, the hook gentley slid from it's upper jaw and the fish returned to the river to gorge itself on Salmon eggs. No matter, I had tasted Steele for the first time in 6 months and it was sweet.

The group ventured toward the lower DSR in search of more fish. After I snagged a robust brown trout in the dorsal, Clark connected with a sweet 26lb buck salmon which I followed up with an 18lb haggard hen. 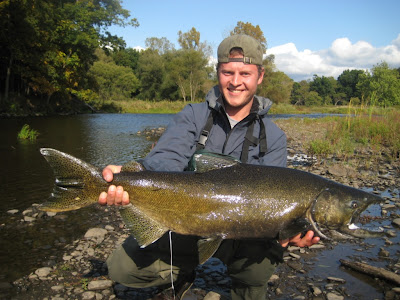 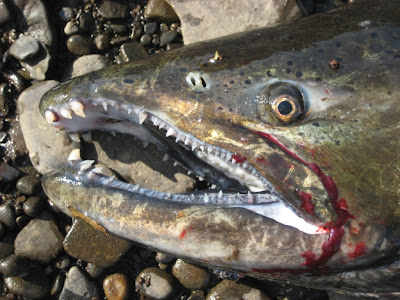 Day two ended with four Salmon on the bank totaling well over 80lbs.

After getting a quality night's rest after Day 2, the crew woke early and headed for a half day spent downstream of Trestle Pool. Clark and I were seeking a quality run below Trestle Pool that we had stumbled on with Jesse in March. Upon arriving at Trestle Pool we found roughly 40 guys lining the river, a half mile hike downstream found us alone, solitarily casting at active King Salmon above and below a sweet riffle. I struck first and second with two bucks in the 20lb class and then Clark struck next with a haggard hen in the same weight classification. We hooked and lost multiple Salmon in this part of the river in less than three hours, and spent the rest of the morning wondering why we hadn't fished it for the other two days. 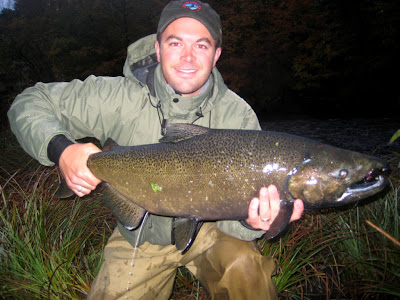 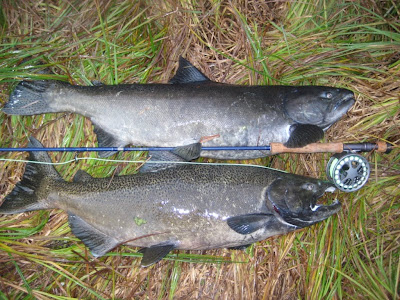 These photos may have seemed to be a Clark and Wilkie montage, but Lane's photos were on another camera, and as might be expected, he handled himself like a true Salmon River scholar on the river, bringing multiple high quality fish to the bank.

The mighty King Salmon is a formidable challenger on the fly, difficult to floss, and powerful in the current, but we came to realize that it's epicness is somewhat lacking, and our hearts are glued to the drag screaming runs of the mighty Steele. We will never return for Salmon; Steele brought us to this river, and Steele will continue to be our primary targets.

Posted by Andrew Wilkie at 5:39 PM

"difficult to floss" well said and well written my friend. I believe we shall refer to the river solely by her new cleaner name, as are hearts and souls have been tainted by the brutality of the salmon run. Long live The River of Steele.

Truer words have never been spoken

several money quotes from that one:

- After a plethera of drinks and other sundries,

- On my four or fifth cast I connected with my first Steelhead of the season; a fish that I neither measured, photgraphed, weighed, nor netted.

- and spent the rest of the morning wondering why we hadn't fished it for the other two days.

great read, wik. i had been waiting for more details on that trip. looking forward to seeing some steele on the board.

speechless. looks like you boys have managed to master the king of salmonids and the Western NY Bar scene in one viciously awesome run. Unbelievable. Flies??