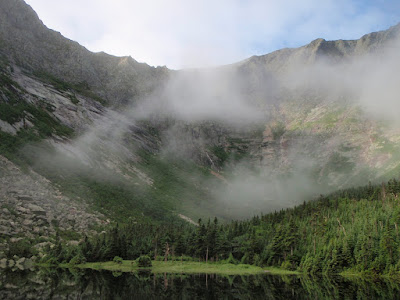 Soy Sauce, Matty G and I were in Baxter State Park over the weekend. We were the first to summit Katahdin on Saturday and the above picture of Knife's Edge from Chimney Pond was the clearest it got during our hike. Most of the day, the sky looked like below. 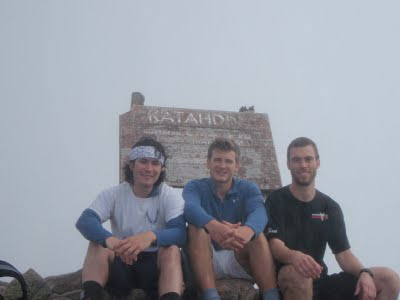 After returning to a few cold ones at our campsite, I elected to take a short drive down the Tote Road and spend the evening fishing a pond I spent a dozen or so summers of my childhood camping and fishing on. This pond is perhaps the first place I witnessed rising trout with a fly rod in hand. Many evenings were spent on this pond with my father casting to rising native brookies or casting buggers while eagerly waiting for a hatch to start.

If you can get there at the right time in the summer, the wind dies, the air temperature is right and you've been particularly good to Poseidon recently, you can find yourself in the middle of an amazing spectacle; a Green Drake hatch. I have a distinct memory of being in the canoe with my father and seeing so many drakes on the water that I couldn't tell which one was my fly. "Just pick up your rod if you see a rise near where you think your fly is!" my father said as we both casting furiously to trout all around the boat.

I arrived at the pond around 6:45 with no expectations except to spend some time fishing on the beautiful pond I had spent so much time on when I was younger. It seemed as though my arrival was welcome, for the clouds disappeared when I reached the pond's edge and the water started to glass over. As I got my gear ready I noticed a few small rings on the calm half of the pond. I had two rods with me, one rigged with a bead head bugger and nymph dropper, the other with a small Adams. I figured this way I could sling the bugger and nymph and be ready should a fish come up nearby. 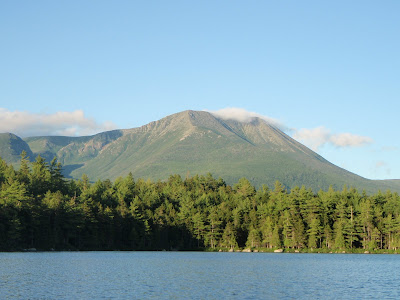 I slid the canoe into the water and slowly coasted into the pond. I stalled for a few minutes near the dock, as the rings I had seen were in that area. A few circles in the canoe and I decided to head to the far shore; the shore where history (and my father) had told me would be likely to have some fish around.

I took my time paddling to the far shore, keeping an eye out for rises and taking in the scenery. The mountain I had climed earlier in the day stood in the sun, nearly free of all clouds. I reached my destination and within a few minutes I heard a rise, a few minutes later another, then finally saw one within range. The 3 weight sent my Adams true and I watched as the rings disappeared while my fly sat in the middle. Nothing. This would happen several more times. Fly change.

Another rise to my left. Cast on the money. Nothing. Change flies. The first fish came up again, a cast on top of him and nothing. Refusal. I could not see a single bug on the water so I put on an even smaller Adams. Again a refusal. No use keeping that fly on. I wondered if the fish were taking emergers just under the surface so I picked up the 5 weight with the bugger and nymph dropper and while I had that in hand a fish came up, I put a cast over it and worked the flies over the rise. Nothing.

Fish started to come up in most directions, far and near. I still couldn't see any bugs on the water. "Just figure out what they're eating," I told myself. A few minutes later I saw a few very large bugs a couple hundred yards away. They were tanish in color, so I put on a big stimulator and put that over a couple rises. No takers. I sat down with my fly box in hand while keeping an eye on these two big bugs. One was fluttering slowly across the surface, looking very tasty. I watched as the bug struggled to take flight and soon enough a splash and the bug was gone. It was time to figure out what these bugs were. I pulled the anchor and paddled towards the remaining bug on the water. When I finally had the bug in my hand I smiled and let the inch and a half long mayfly return to the water. Green Drakes.

I pulled the box out of my vest again and spied what I was looking for. Onto the tippet it went. Not long after, a fish rose nearby. The fly landed in the ring. A second later it went down. Missed it. I cursed softly while an uncontrollable smile took over my face. I had figured out what they wanted and I had it tied onto my tippet.

The next hour and a half had me smiling, cursing, turning my head this way and that, casting to 1 o'clock, then 8 o'clock, then 4 o'clock, shaking my head in disbelief and thanking Poseidon repeatedly. It wasn't long after that first missed strike that the bugs started to come out in full force. I treid to capture the magnitude of the bugs in the air, but it was hard to focus on photography. In the picture below you can make out a few bugs against the blue sky and you can also see a rise in the distance. 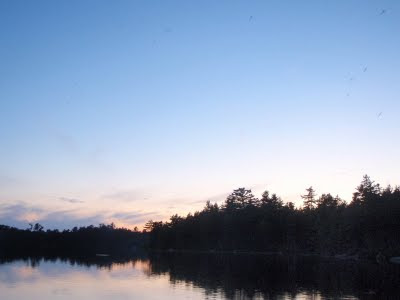 All in all I landed three, the biggest one below, close to 16". I missed maybe 10 and broke off two that put a good bend, albeit brief, bend in the little 3 weight. At one point I had to retie new tippet and a new fly on. In the minutes it took to do this, I think there were 30 rises. 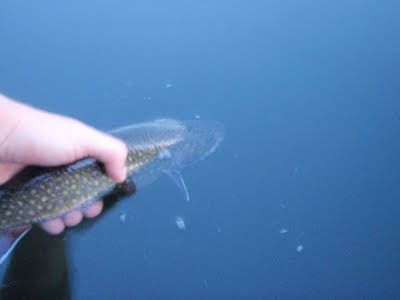 It was one of those evenings that the pieces just came together. It was all very surreal. I couldn't believe I was in the middle of it all. It was like one of those nights when you get taken home, wake up the next morning and can't help but smile thinking about what went down. It was as if these fish hadn't eaten for weeks. Many times have you go through all the necessary steps to prepare for a hatch and it just doesn't happen. When it does come together, you just feel lucky. Did I mention I was the only person on the pond? I didn't have to use the anchor after a while; I would paddle once, go on a 45 minute drift, passing through rising fish in every direction.

By the time the sun had been long gone and the moon had come up, I had lost all my drake flies and was fishing with some sort of large, extended body mayfly. I managed a few strikes on this fly but visibility was failing fast. And just like that, a slight breeze picked up and the sounds of rises stopped. I took one last picture before canoeing back to the dock. 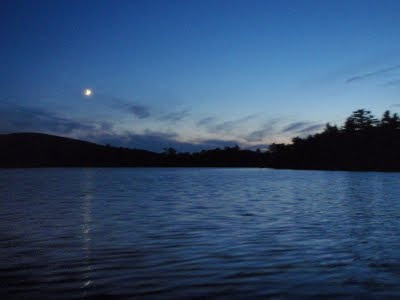 "To many afflicted Eastern fishermen, the Green Drake Hatch is as irresistable and habit-forming as black jack, whiskey, or easy women."

Posted by Jesse Lance Robbins at 7:34 AM

Ha, Robbins, this is the kind of post that I needed. Something that gets my blood flowing. This humid heat has had me in a fog, my brain is now clear, I must seek the mighty trout soon.

glad i could be of service my friend

Nice work Jesse! You remember the conversation we had about the word "drake" down at the cape? Ha!