Allen's Coffee Brandy sold more bottles than there are drinkers in Maine? 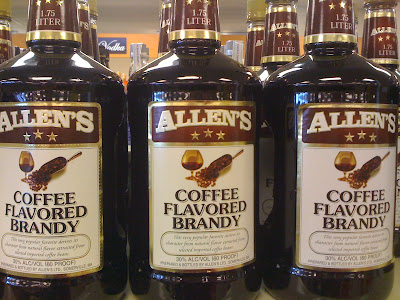 + According to today's AP report, Allen's Coffee Brandy sold almost 1.1 Million bottles in the state of Maine in 2008, making it the top-selling liquor in Maine once again

+ The AP article doesn't give exact number sold, but we can assume that the absolute lowest # of bottles was 1,040,000 ("up nearly 40,000 bottles from 2007, when Allen's became the first brand of alcohol to sell more than 1 million bottles in Maine in a single year")

+ Meaning Allen's sold about 1.09 bottles per each person of legal drinking age in the state of Maine

Email ThisBlogThis!Share to TwitterShare to FacebookShare to Pinterest
Labels: Booze

i had .5 bottles this weekend

I enjoyed the other 1/4 gallon

Shit, after all of that I need a drink.