April Pike....we may have figured them out 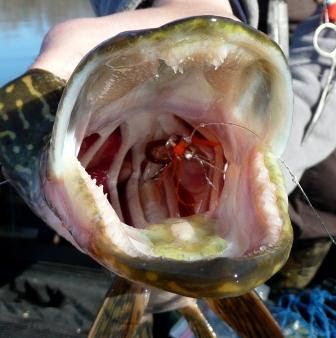 As a result of the slow building climate, my business partner's wife expecting a baby any day, and the nature of an "in-between" guiding season, I've managed some serious Pike fishing on the fly this season. Clark, having finished his thesis, finals, and with only one paper remaining, pulled some heroics and decided to meet me on the water this morning. The plan was simple, be on the water by 7 a.m, break out the new fly patterns I've been tying, and hope like hell the Water Wolves were agreeable. 15 mins into the outing we had a feeling it might be a good day....Clark was tight. 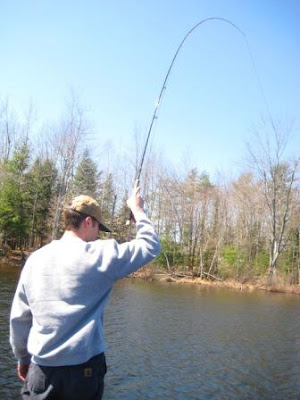 He proceeded to grease a respectable Pike over a nice bed of invasive Eurasian Milfoil. You can't say much good about the shit, but hell it provides some stellar early season Pike cover, and the bastards bust out of their holes at blazing speeds for tasty fly offerings. 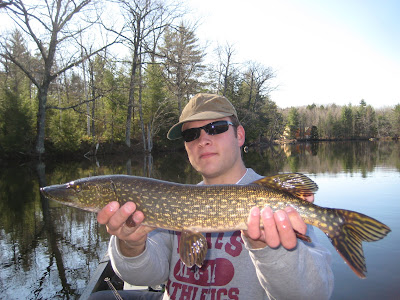 First Pike on the fly for Clark, and on a new pattern I had whipped up, I was the proud "father", he was the stoked Pike first timer.....the day had begun

Clark proceeded to grease two more cookie cutter males on this same fly over the next half mile of drifting as I tossed various other patterns that had worked only a mere five days before. 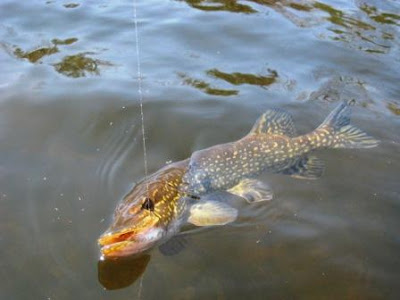 We worked some deeper water farther downstream, and having noted that a particularly long stretch of stream had been worthless a week before, we decided to motor back upstream and drift through the same water again.

The day had warmed significantly and I was beginning to be concerned that the bite was all but over. As we began to drift the beginning stretch again I noticed a small male come flying out of the milfoil I was working. No sooner did I yell, "I have a follow!" did the northern hammer my fly. My skunk was off, I breathed a sigh of relief, released the fish, and continued with the drift.

We each had several more follows as we drifted toward a deep hole that we had passed up when motoring downstream earlier. We positioned ourselves at the head of the hole, noting the wind influence and the nature of our drift. Second cast into the deep slot my day changed. This fish took the fly, and soon enough I knew I was into a something significantly better than the 5-6lb cookie cutter fish we had been into. We got several glimpses at the Pike, not able to truely tell it's size. Then Clark got his first solid look, "Dude that is a good fish; really nice fish man!" It's downward fight was powerfull; it's runs weren't epic, but were strong enough to remind me that I was dealing with a freshwater barracuda of sorts and that my 25lb fluoro bite gaurd at the end of my leader was the only thing keeping this fish from shredding my line. 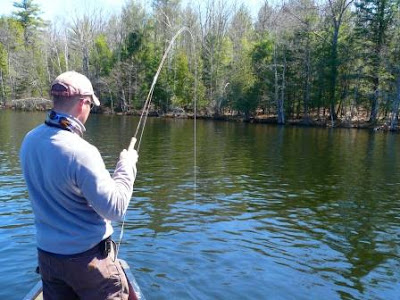 After a five or six minute battle the fish came to net. Some fist bumps and some encouragement from a local camp owner on shore were the defining moments of the fight; I had gone from a near skunk to some afternoon heroics. 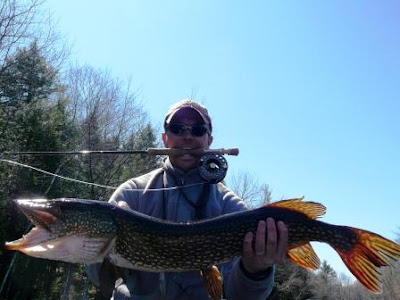 We repositioned in the same fashion at the head of the hole, proceeded to drift again, and once more I was onto a fish, not quite as big, but another big Northern.....hell this hole was on fire. 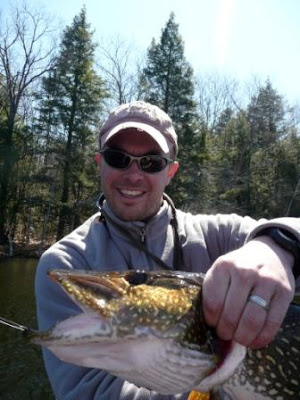 6 very legit Water Wolves came to net, with countless follows, and several fish in the high teen to 20lb class seen with our polarized lenses in the water. Each fish came on a new pattern I had tied up since the last outing.....epic weather, epic outing. 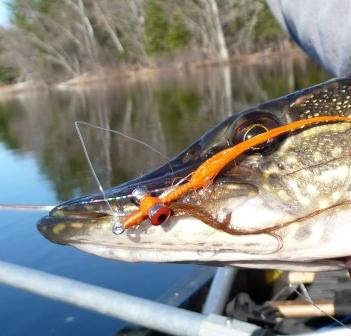 hot damn! length/girth on that biggun?

25 lb flouro huh? have you played around with wire? they been shy to that?

let's test the evening bite next week, let me know what days are best for you. still stinking like skunk down here

Jesse, the fluoro lets the fly have a more natural movement in the water in my opinion, and on a financial note, it doesn't cost 18 bucks like that tiger wire does. I use 16" of it tied to the end of my regular tapered leader. Turns over fine with the heavier rod.

How does that cork taste?

is your pattern any different from a clouser? Its hard to tell from the view you gave.

I'm spring skiing and hopefully trout fishing up in the sierras this weekend, looking forward to wetting some line!

Nice looking Pike there on the fly mate. I write a blog dedicated to pike on the fly.Stop by and have a look around.am sure you'll find something of interest.
http://www.pikeflyfishingarticles.blogspot.com