A 6:30 morning rendez-vous would find Paul and I in the Pleasant River soon thereafter. I had never fished the Pleasant, but as soon as I got my first good glimpse of it, I knew it would be a joy to. The Pleasant is a fairly small river that winds its way through the woods of the Gray/Windham before flowing into the Presumpscot. The widest I ever saw it get in the mile or so I covered was about 40 feet. 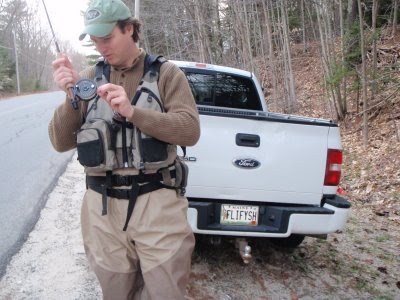 What a pretty river though. I had grabbed my 9' 6 wt because I had left it strung up in the car, but several times I wished I had my little 6' 3 wt instead. We passed a number of holes that looked very fishy. One such hole amazed me. Below a small island, the main stem and the side channel came back together right behind couple of large rocks, forming a small eddy and slack water before shooting back down stream right against a steep bank, curving to the right into a nice run. Fish could hold in half a dozen spots in this hole. I fished it hard to no avail while Paul looked on, noting that he had stuck fish in the spot in years past. 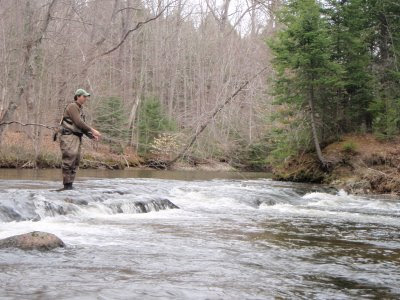 After fishing for several hours and losing at least as many flies to the trees, we decided a move was in order. A short jaunt over to the Presumpscot and we were in the water again. As Paul and I stood on top of the bridge crossing the river, we noticed what looked like rises coming several hundred yards down in a very wide, slower section of the river. We watched for a couple more minutes before, sure enough, seeing another rise and another. That was all I needed to see.

Bushwacking my way down river right, I was unsure if the river was shallow enough to wade, but I thought I'd try to get as close as I could to the fish. Picking my way out into the wide river, the water coming closer and closer to the top of my waders, I finally got to a spot where I thought I could put a dry fly over the fish, whatever it may be. I tied on the smallest parachute Adams I had and waited.

He came up again. Shooting a cast down and across, then adding line into the drift, my fly floated nicely over the spot where the fish had come up. Nothing. I stripped in and waited again. Minutes passed and another rise. False cast, false cast, boom, drift. Nothing.

I played this game for close to an hour with no luck, my desire to sting this fish mounting with every rise. Paul had been watching this from upstream, working his way down and now he was 50 feet to my left, throwing what I could only make out as some big, beaded fly. Ten or so casts later and a huge splash came at the end of Paul's line. I whirled around to see Paul's attempted set and then his fly shoot out of the water behind him. We looked at each other in disbelief.

So after an hour of floating dries over this rising fish, we get him to take a big nasty thing and then miss him. 'Rusty' might be one word...

Posted by Jesse Lance Robbins at 7:49 AM

maybe it was a steele