November 9th, 2008
(Two Weeks Prior)
Four souls, haggard from three days of chasing Steele on the Salmon River, pointed their SUV toward Maine and crept onto the south bound lanes of I-81. The chatter was sparse, I nursed my wounds after stinging countless Steele while putting none on the bank, the rest knew my pain, and kept quiet for the first few miles of the return trip home. As two and then three miles passed on I-81 south, the realization that this vehicle was actually driving away from this Steele filled river slowly began to sink in for everyone in the 4-runner. A few awkward coughs provided the ice breaker for conversation; Lane said, "So when are we planning on coming back up here?". Silence.... I looked over at Jesse who was looking straight ahead obviously chewing over the idea. The anger I harbored from my personal lack of Steele was beginning to dull, and without thinking I said, "If we're going to do it, lets not just talk about this, lets be serious, what weekends are we all free?" Five minutes later we had a plan, we would return in two weeks. Less than 10 miles into the return trip home we had a something in the works, something we all needed......A Return to Steele.

Fastforward two weeks. I pick up Clark for a morning session in southern Maine. The temp was in the low 20's. Thirty minutes of fishing at this destination would be telling to say the least. Frozen line guides, frozen reels, frozen fingers... The weekend ahead in Western New York would boast similar weather, potentially colder temps accompanied by snow, up to 30 inches said some reports. After a fishless three hours on the water, we headed toward Portland. Upon our arrival we packed Jesse's gear and managed to tie a couple flies before his arrival. By 3:30 p.m we were on the road, by 5 p.m we apprehended the Captain himself, and by 9 p.m we were on I-90 in the land of the Iroquois, battling blizzard conditions. We pulled into the motel parking lot by 11:10 p.m, promply unloaded, rigged our rods, and were waist deep in whiskey, brew, and Kareoke at the End Zone pub by midnight. Of course we closed the bar down, by 2:30 a.m we were in bed. 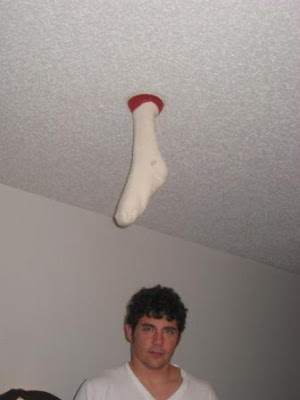 Apparently the "evening session" just before bedtime threw off our early a.m wakeup. The wakeup call and the alarm were both somehow averted....6:30a.m came, curses flew, the crew sprung to their feet disoriented but determined. Bagels and sandwiches were made as Clark moaned with anguish. Despite this setback we managed to be on the water by 7:15 a.m only thirty minutes after legal fishing began....not bad.

The river was high, 1150 cfs, roughly 400 cfs more flow than two weeks earlier. Among other things, the Salmon River was swollen, but our spirits were high. We hoofed upstream to the spot that treated us so well on Sunday 11/9. Wading was tough; this fishing environment would be totally different, we were about to toss everything we knew about Steelhead fishing out the window (except for terminal tackle, flies etc..) . Spots that were sure things two weeks before were impossible to access, the group fanned out. Jesse and I took the upstream territory, while OO-Steele and Dr. Steelegood took the dwnstream runs. Within moments Jesse was tight, a friendly fisherman offered his net, the skunk was off. 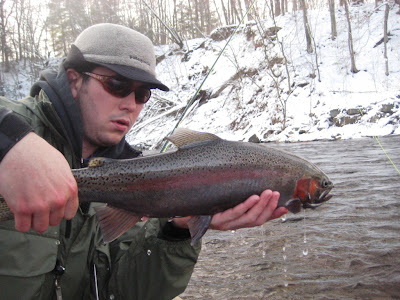 Amidsts the falling snow fist bumps were exchanged and we got back to work dredging this stretch of water. An hour or so later Clark managed a strike, his Steele would have to come later, this stretch of water would be abandoned for other potentential pools that our intel (Dave) had filled us in on. The moved concerned us, but the combination of high flow and slow fishing would make this a necessary evil.

We consulted the river maps, one really nice map that Jesse snagged was an aerial image, this proved to be extremely valuable as we would have to bushwack along an old cornfield and on through the woods in order to get to Trooper Hole. Knowing nothing about this stretch of water, we positioned ourselves along the river. Roughly 15 mins later my indicator sunk, I raised my rod and freed my fozen reel....."STEELE!" I yelled.....the unforgettable Salmon River battle cry echoed from the river banks. The fight was different, I could tell that this fish had the potential of being a brown, while still excited about the hookup my visions of landing Steele slipped away as Clark netted our first German hen of the trip. 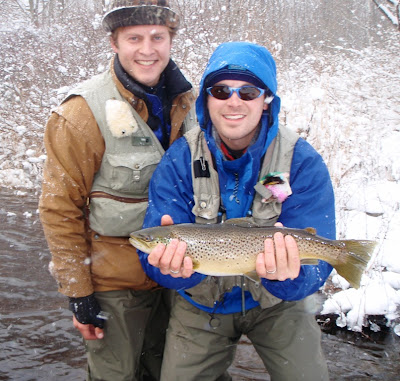 The dirty German was not what I yearned for, and while appreciated Poseidon's offering, I quickly got back to work in the same hole in search of Steele. I wouldn't have much time to concern myself with this goal, as a few casts later I was tight again. As you might expect there was a battle cry, a lot of hooting and hollering in anticipation of my first Steele, but again, Poseidon only offered me another Brown, slightly fatter than the previous specimen, but still not the Steele.... 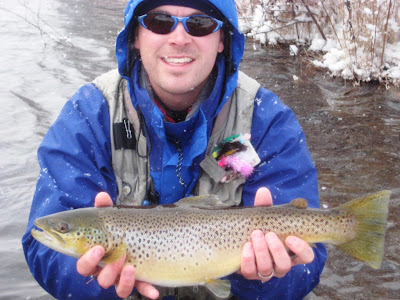 Keith was fishing a rather attractive run just upriver of me, and it wasn't long until my recent stretch of Brown Trout fortune had rubbed off on him. Now he too was tight, tight to another bit of European bi-catch. Another nice female Brown.....where the hell are the Steele??? 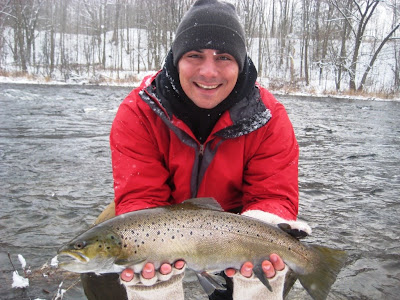 The snow conintued to fall, heavy at times, and the persistant cold coninuted to dominate our reels and line guides. Jesse's Ross has completely ceased to work, drag non-existent. Clark was the first to make a move downstream toward the I-81 bridge; his hunger for Steele and disgust with our Brown Trout success sent him searching...searching for the mighty Steele. Keith and I wouldn't be far behind as we fished above, under, and between the north and south bound lanes of the highway; a rather surreal fly fishing experience. I slipped back upstream a little as Keith coninuted to fish a run between the highway bridges. As I approached the pool where Clark was fishing, the very pool I had just fished the shit out of might I add, I watched him lift his rod in silence, fish on, could it be Steele? The fight was long, and while there were no reel screaming 100 yard runs, we knew what he was tight to. In time, the fish came to net, a really nice dark Steele. 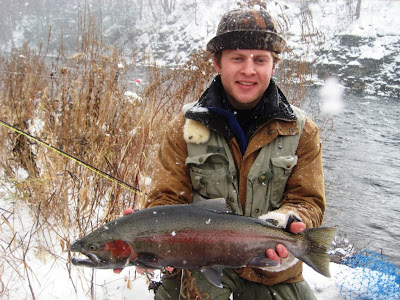 Over the next hour or so I managed to go tight to Steele, my first legit offering of the trip; the fish was strong and my reel was frozen, a combination that is not helpful when attempting to land Steele. After several darting runs my 11lb fluoro tippet was greased. 0 for 1 is painful. Clark would manhandle a dirty German of his own just before we headed back to the Toyota, yet another hen. His face here speaks a thousand words; we seek Steele, not Browns. 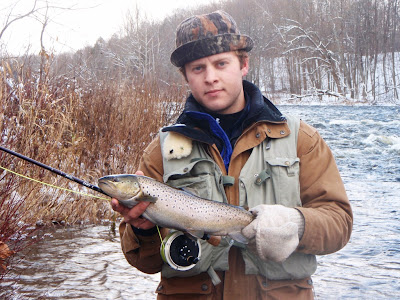 The daylight was waining, we stuffed sandwiches into our mouths and warmed ourselves in the vehicle. We would move toward town, fish until dark, and head back to the hotel. The view downstream from the bridge in Pulaski showed some tasty water. After a scouting a few side streets we found our access. As we marched toward the water I could tell that a woodland evacuation was in the cards for me; I sensed danger if I did not. Everyone headed for the water as I scouted for a bit of privacy. If you've never experienced this process in a pair of waders when its 17F out, it really is quite a site to behold. The removal of 7 or 8 layers with your waders and three pairs of long underwear around your knees is at least a 15-20 minute process that should be reserved for emergency puposes only. With that out of the way, I too headed for the water and was soon waist deep alongside Lane. Jesse and Clark headed upstream to gain access to a sweet stretch of water, they found their access by holding onto a rope that forded a very fast stretch of whitewater. Keith and I flogged the lower end of this pool, jockeying for position with several centerpinners who apparently think that fishing ten feet from another person is perfectly OK. Over the weekend we found that all centerpinners think that this is OK, and they will do anything to slide in on a spot that you may have completely commanded for the past two hours. As dark approached, Keith went tight on our first male Brown Trout of the day. 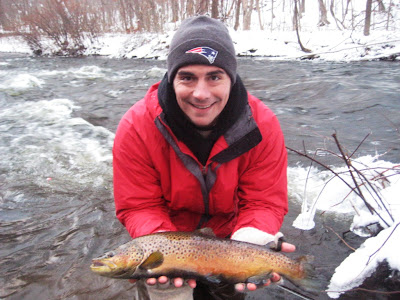 The day would end with both Keith and I having gone without Steele. I had gone 0-1 and Keith had not even tasted Steele. While we had proven our Brown Trout dominance I remember thinking as I left the water, is it really even in the cards for me? Is it possible to spend this much time on the water and not taste Steele? perhaps.....

side note: We all step up to the car, I reach in my pocket for my keys (the only set we have for both the roof box and the 4-runner) and the pocket is open, unzipped, keyless. I pat my other pockets, frantically searching for what I already know is long gone. I look at the group, blank faced, "they're gone" I said. The ground is blanketed in 6 inches of snow, if they're not in the river, then they're buried in the snow somehwere. One in a million chance we'd find them, darkness was spreading over us quickly. I ran down the bank and into the ravine where I had relieved myself.....no obvious sign of the keys. On my hands and knees I began pawing through the snow where I had taken off my jacket and top layers..... Lane arrived as I was frantically sifting through the snow. Then I touched it, a jingle, a loose pile of metal object in a sea of snow, I had just effectively pulled a needle from a haystack. Lane and I shared a robust man-hug rejoicing the find....I can't believe I found the goddamned keys....ha! Day one was over, night two was tame, pizza consumed, decision was made to fish the $30/day DSR, crew asleep by 11 p.m. Clark snorred on like a freight train as the rest of us restlessly dreamt of Sunday Steele.
Posted by Andrew Wilkie at 8:09 AM

Dude, I wonder what happens on Sunday. The anticipation is killing me!

well keith, if the anticipation of what happenes on sunday is killing your lucky ass, imagine what is happeneing to us poor helpless dinks who can't help but sit and wait until our steele is served to us... great story wilkie. it seems you have a habit of taking emergency trips to the far side of the boulder. rip up a pair of longjohns this time?

i heard Basil brought in a 22 pounder on a night crawler.

I heard Basil caught a 237 pounder that night on a pink eel.