I think I figured out why Apple Blend Skoal so effectively catches fish while other blends do not. It’s the smell. For some reason, fish like the smell of apple blend. Perhaps it closely mimics the scent of some form of bait, or perhaps it’s just a random evolutionary quirk, but when several fisherman are enjoying a lip of apple skoal, and spitting into the sea, a skoal slick sets up behind the boat and fish are attracted to it. When trolling, this slick disseminates through the water column back over the trolled baits. The combination of scent and visual stimulus of the baits is too much for fish to resist. It’s science! But, I digress….

My apple blend skoal theory was put to the test again this week. Canyon Run III was a last minute decision on my part. The weather window opened up and I knew it would be my final opportunity to head south this season. Jon Pilcher, the Tuna Nut, asked me if I wanted to make the run south with him. I cleared it with my boss and went down to the Cape Tuesday night. Plan was to leave Wednesday morning for the Atlantis Canyon area. “Tell my wife I am trolling Atlantis, and I still have my hands on the wheel”. Billy Joel brought great honor to trolling Atlantis Canyon in his epic ballad, “The Downeaster Alexa”, and I was pretty pumped just to get out there. It would be Tuna Nut, this dude GW who I hadn't met, and me. A small crew of three making the big run south.

Recent fishing reports had been pretty solid. Over the weekend, a lot of boats took tuna on a temp break between Atlantis and West Atlantis canyons. Our plan was to fish that general area on the troll during the day and deep drift the canyons at night for swords. As we were leaving the dock, a guy Jon knew on the “Salty Dog” rolled into Falmouth Harbor after returning from the canyons. His report was not good at all. 1 mahi and nothing else. Totally dead, not even a real bite. Seas as rough as he had ever seen out there, etc. With that report, we looked over his budget 1980 Silverton, declared him an amateur and cast off the dock lines. Next stop the canyons.

Two hours later we rolled into blue water just north of Atlantis. Lines went in and we worked southeast along the shelf in the direction of Veaches Canyon. The water looked largely dead. No bird life to be seen, but there were dolphins moving around in different pods. We started working the high fliers and were able to pull decent mahi off roughly half the fliers we passed. We also stumbled upon the mother load of all dolphin in a crazy school. We pounded this school hoping to find yellowfin underneath but our efforts went without fortune. They were friendly creatures though. You could reach under the boat and touch them!
We continued southeast out of the mammal pods when we had our first billfish encounter. A white marlin revealed itself in the spread and began a slashing attack on the green machine spreader bar. For no less than 20 seconds the marlin attacked the bar as we watched and eagerly hoped it would eat the stinger baits. The marlin then disappeared for two seconds before coming up behind a jet head lure run down the middle of the spread. After speading 5 seconds attacking the jet head, the marlin disappeared. Thinking the show was over, we looked at each other with some disappointment. 10 seconds later, the far outside rigger which had an islander ballyhoo combo on it, got eaten. The white had taken the way way back bait. A short (and rather atypical) fight later, the marlin was in the boat. Unfortunately the marlin stayed down for the entire fight and didn’t jump like they usually do, but it was still cool to bring a billfish to the boat. We took a few photos of the release and back she went into the deep blue sea. 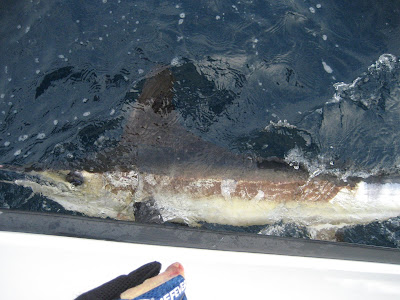 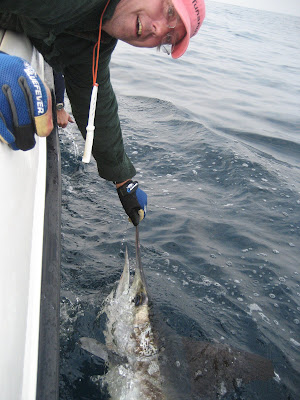 It was getting late and with darkness setting in at 630 these days we elected to run back west and set up over Atlantis for swords. By the time we had figured out the drift and positioned the boat, it was pitch black. Jon’s favorite type of fishing is sword fishing, and he is really an expert at rigging for and catching these fish. I learned a lot from watching how he rigged up and fished four sword baits. I look forward to greasing some swords next year using his techniques on the Edge. With lines at 200, 150, 100 and 75 feet below the surface, we drifted in 1500-2000 ft of water off the edge. Some hot burgers off the propane grill later and it was bed time. I laid down on the bow and Tuna Nut took first watch. I was just starting to fade off to sleep when a clicker ripped out three feet of line very quickly. Jon grabbed the rod and loosened the drag slightly. Then fish gave a long run off and Jon through the drag up to strike. It was on! We had hooked something legit. GW and I jumped into action and began clearing rods and setting Tuna Nut up in the harness. We fired up the engines so that we could position the boat as needed during the battle. The fish made some long tearing runs on the 50. At one point, it came up to the surface and we thought that we had lost it, only to come tight to it right under the boat. Then it dove again taking 150 yards of line right back to the bottom. This fish was a battler. Jon was getting worked over pretty good and gave me the rod to put some pressure on the fish. I was able to regain some line. I gave the rod back to Jon, I like to think after breaking the fish’s spirit, and he brought it closer to the boat while GW and I grabbed the gaffs. At roughly an hour after the bite, I slammed a gaff into the fishes head and it was game over!

This fish was a monster sword. 110 inches long to the end of the bill, 80 inches from the bottom jaw to the tail fork. Estimated 250+ pounds. A true canyon monster of the deep. It was awesome. 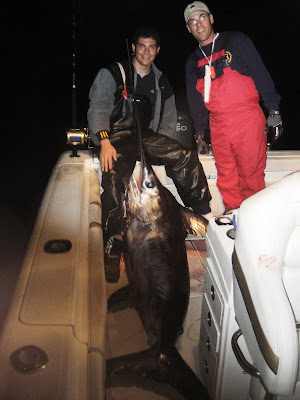 We got the lines back in and had a second hookup around 4 AM. This fish was smaller than the first, and we pulled the hook after 5 minutes. As the sun came up, we discussed options and elected not to troll for tuna based on the amount of fish we had to process. We decided to head straight back to the dock. The seas cooperated and we were back in Falmouth at 10 AM.

For me this was just another solid hookup in a season that has seen many. I am done for the year. I am now shifting my focus to a different sort of hook up, the kind that is available all year round. To all you BFC heroes out there, both near and far, give me a ring when you’re in Boston and we can head to the local watering hole and tell some fishing stories.

i guess 'ol billy was wrong about one thing: there IS luck in sword fishin here

wow... thanks for the tip on the skoal. does it work for the year round hook ups too?

unfuckingbelievable. were those your first swords? How'd the steaks turn out?

Yes, those were my first swords. We had gotten a bite from a sword on our first canyon run but no hookup. The steaks were and continue to be phenomenal. I will be eating mercury again tonight...

Hallas, throw a lip in right before you next go down on your lady and let me know how she likes it!!!!