The last weekend of September ushers in the end of Maine's standard open water season, the time when all waters close to fishing except for those with extended season regulations. It has become tradition that I ceremonially begin and end my open water seasons w/ Jesse, this year we were fortunate enough to be joined by another BFC alum, one Sawyer Fahy, slayer of both native trout and local Maine females.

The three of us joined forces on Friday night around 6 p.m. I had packed the vehicle, Sawyer arrived w/ his provisions, and not long later Robbins rolled in and we were on the road.

As we turned off from Rt. 2/27 in New Sharon and headed north on Rt. 134 toward Madison, spirits ran high. The weather prediction for the weekend was wet; we were rolling tarp heavy, come hell or high water we would be fishing in honor of this final weekend.

Approximately 6 miles onto 134 an adult doe white tail deer crossed in front of us along a foggy stretch of road. No sooner had we commented on the doe in the distance, we struck and killed a small buck. The bumper and front end of the vehicle was pretty messed up, and I wanted to ensure my ability to make an insurance claim, so we called the sheriff and hunkered down. In the mean time, several vehicles stopped to ask if we were alright, and one such character who lived down the road immediately inquired if we were going to take the deer....of course we told him that the deer would be rolling with us. 30 minutes later the sheriff arrived, 30 minutes after that he tagged the deer and we found ourselves stuffing the 80lb specimen into the back of the 4-runner. The vehicle may have been fucked, but goddamnit we were going to eat well. 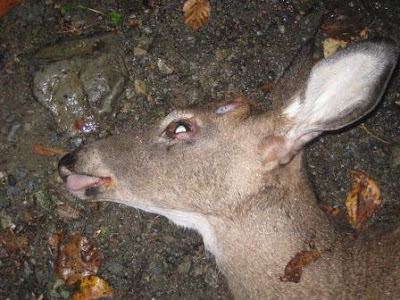 We fired up the 4-runner and were once again on the road, an hour or so had been lost. Spirits remained high as we continued on toward The Forks, and by 9 p.m we were at the site. Rain was falling lightly as we setup camp, and it only intensified over the next hour of making camp. To our surprise, one of my tarps turned out to be nearly 50 ft. long and with some fancy rope work we had one hell of a tarp town. Everything from our fire pit to the cooking area was under one tarp. The tent was set up and also tarped over; with 4 inches of rain in the forecast and several wet outings already this year, we damn well were going to be dry. Once we were settled in and had a few drinks in our systems, I steaked out the salvageable hind quarters of the deer and we ate a hearty pasta and garlic bread dinner. 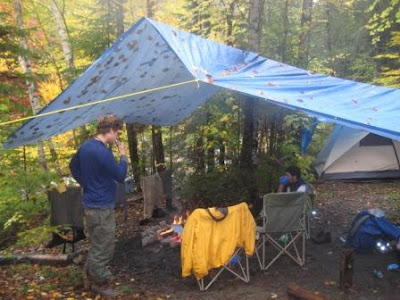 We rose around 7 a.m on Saturday and prepared for the water. It had poured all night long, and it appeared that our tarp handywork had kept the site dry. A large salamander greeted us at our tent door. May it be noted that this salamander later spontaneously died after I took it's picture........two for two on killing wildlife during this outing, surely a bald eagle would drop randomly from the sky before the weekend was over. 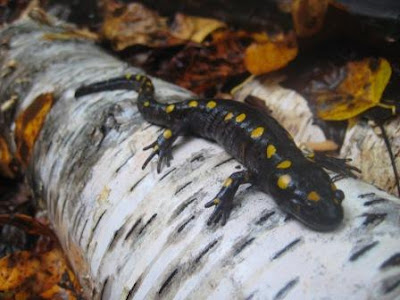 A quick walk upriver to a secret spot that has poduced countless large fish produced nothing....something was up. Back to the river we went, yet I couldn't help but feel like things were out of whack. Upon returning to the river Jesse promptly hooked a small brookie and the rest of us fanned out with no luck. As I wandered back downstream to meet Jesse I asked him "hey man, lets go downstream to a couple other pools, you game for that?" to which Jesse responded "yeah". He continues to tie a nymphing rig and then wandered back out in the river. I said to him "dude, did you just hear me about going downstream?"......"yeah man, just give me one cast". First cast, literally, and BOOM! Fish on, and what a beauty. 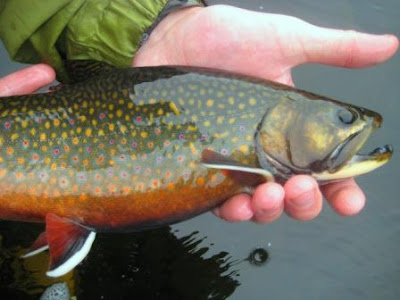 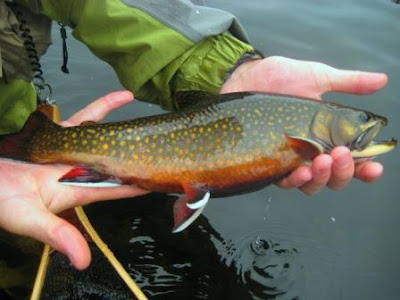 The remainder of this day was spent hitting pools that had been sure things only two weeks ago at which we repeatedly were hosed. Not sure if it was the approaching low pressure of tropical storm Kyle or perhaps the moon cycle, but the fishing had seriously shut off on this stretch of water. Despite the poor fishing, the foliage was spectacular! 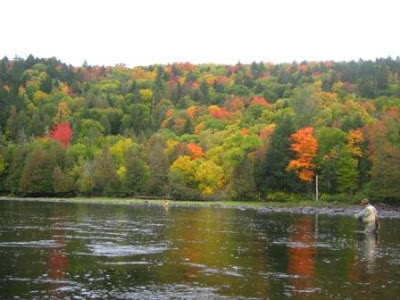 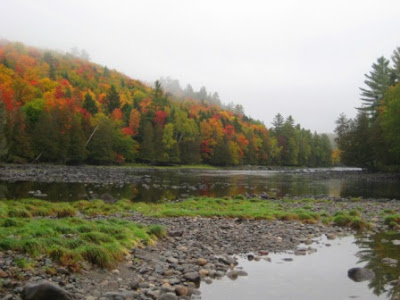 We stumbled into camp at sunset, ready for some good food, music, and the buzz of Candian Club whiskey. The FM radio selection limited us to death metal rock and it wasn't long until the AAA batteries that we robbed from a headlamp and put in the fm transmitter for the I-pod died. It was 8:45 p.m, a decision needed to be made. We readied ourselves for a trip into The Forks in search of batteries but knowing full well that we would end up at one of the half dozen whitewater rafting bars that the area offers up. The store was not open, batteries and beer would have to be apprehended at the bar.
The first bar was beat, but we managed a round of beers and a couple games of pool and headed down the road. Bar #2 offered up Kareoke, 36 year old birthday girls, lesbians, 6'5" 250lb african american women, and potentially hot females who sipped PBR tallboys through straws.....you can imagine how this bar scene played out for us. We arrived back at the campsite at 12 a.m after Jesse had made a clutch battery and beer purchase from the bartender......the night was rescued and we settled into the evening filled with quality tunes and chronic.
Another rainy night came to and end and was promptly followed by an apple pancake breakfast and a quality campfire. Fishing season as we know it was over but it was certainly sent out in style. Another epic outing for this cast of characters!
Posted by Andrew Wilkie at 8:26 PM

rumor: trick or drink in portland.

Excellent work fellas. How about a picture of your messed up 4-runner?

keith, the birthday girl at the bar in the forks would've caught yer eye.

The coloring on that brookie is absolutely gorgeous. Fantastic photo

Did you hear/see the raft of Batesies drift past the confluence on Saturday? we were the very loud, wetsuit clad, half cocked group marinating in our own filth in a blue raft.

that is a nice looking fish, way to show the old man who's boss robbins. well done.