I returned late Sunday night from a week-long trip out west into Wyoming and Idaho, with my father Jon, my buddy Lucas and his father Terry. I managed to write a small essay on a weekend in New York, so I'll keep this one more brief. By day:

Sat. 9/13: Arrival in Jackson Hole, my father and I are met by Lucas and Terry in the Pathfinder that would be our whip for the trip. They had been on Flat Creek during the day, where Terry had landed a real nice Cutthroat around 18" on a hopper. We travel south of Jackson to Bondurant, to the cabin of Willy and Nancy, Lucas' uncle and aunt. What a spot. 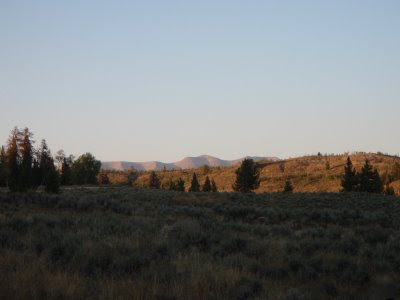 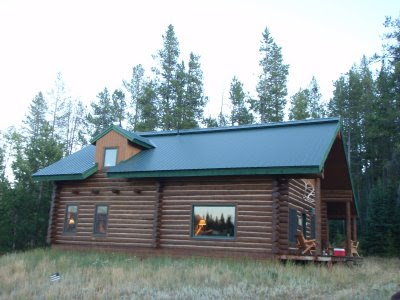 Sun. 9/14 - Mon. 9/15: We loaded up the Pathfinder and traveled north west to Island Park, Idaho to fish Henry's Lake. The famous Henry's Fork runs out of this lake and in the lake are plentiful numbers of cutthroat-rainbow hybrids and also a population of brook trout. Sinking lines and buggers and nymphs were the ticket here and we stung a good number. We rented a cabin on the lake for the night and fished half days on Sunday and Monday. Numbers: Jesse: 3 hybrids, 16, 18 and 20"; Terry: 3, including one cocker; Lucas: 2; Dad: 2 hybrids and 1 brookie. 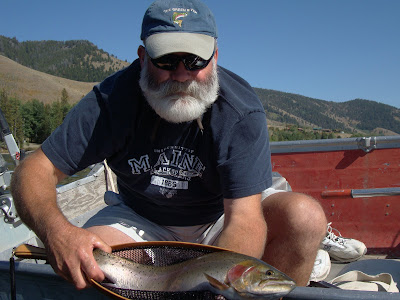 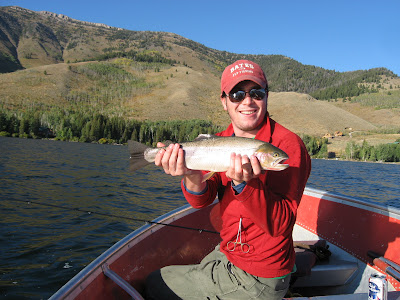 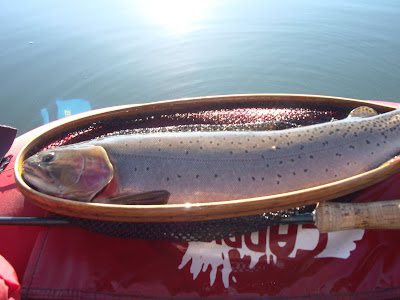 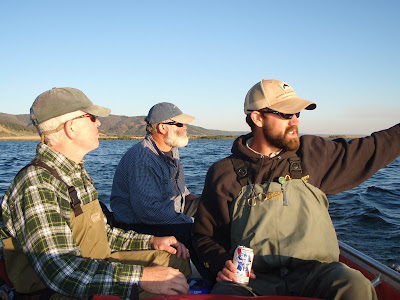 Tues. 9/16: The Hoback River, one of many tributaries of the Snake, was very close to our cabin. We fished this on Tuesday as well as Granite Creek, which flows into the Hoback. Pretty much every river in the Jackson Hole area doesn't fish well until the sun hits the water and temps warm up. These warmer temps get the terrestrials hatching and buzzing around, falling in the water, which in turn gets the fish actively feeding. Our flies were hopper patterns, stimulators, foamulators, ants, chernobyl ants, turck's tarantulas, beetles and a bunch of other large, high floating dries. These cutties are very slow takers, so we all missed a good number of strikes on the dries, but we were able to sting a few fish on the Hoback. Jesse: 7 cutties, 6 - 14"; Lucas: 3 cutties, one real nice 16+" guy; Dad: 3 cutties; Terry: 1. It was really nice fishing the Hoback, as it is a smaller sized river, of which I am pretty familiar. Only thing was, no brookies or salmon, just native cutties. 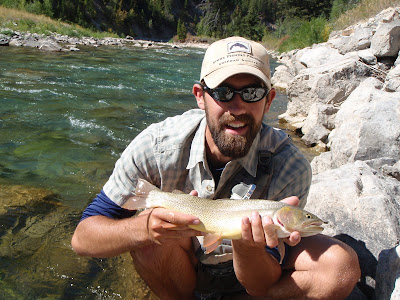 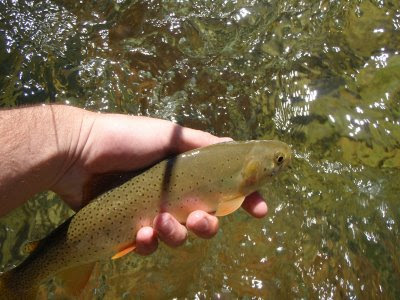 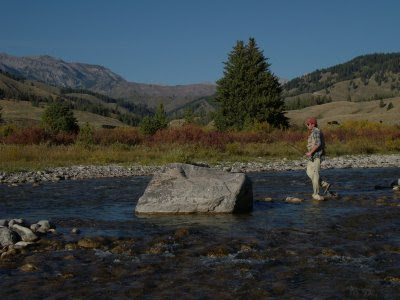 Weds. 9/17: Lucas' work called, so Dad and Terry fished a wadeable section of the Snake. I elected to fish the tricky Flat Creek. I had read a fair amount about this fishery and also seen one inspriring video that stoked my fire. The creek runs through a big meadow just north of Jackson. Its fish are spooky and smart. The creek itself is 20' across at most and fishing it requires stealthy approaches, spotting a rising fish, determing what it is eating then presenting to it. Oh yea, and hooking it. I honestly was hoping for an ass kicking on this stretch and that's just what I got. I landed three whitefish (western equivalent of a chub), hooked two cutties, losing one shortly thereafter then losing one about 5" from my net and also missed about 15 strikes. It was a type of fishing I had never done before, on a very small stream like I had never seen before. I hope to get back there someday. Pete, this place reminded me of a phrase you once used: a good fishing problem. This video is a great intro to the fishery. 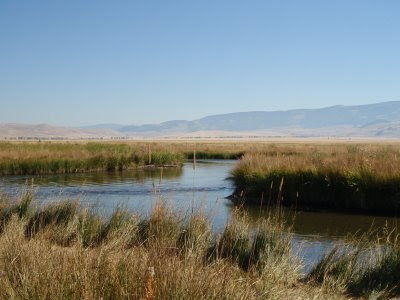 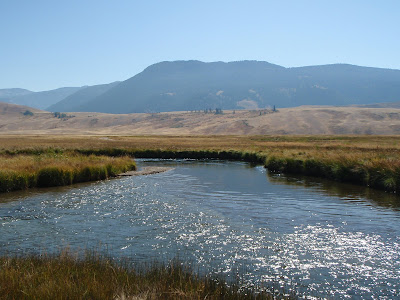 Thurs. 9/18: So Lucas has a summertime gig with the Wyoming Fish & Game. It just so happened they were electro-shocking Flat Creek, so we all decided to help out. Man, the fucking hogs that came outta this creek. Of particular note: a 21" 4.5 lb brown, a 20", 4 lb cutty. Numerous cutties 16 - 18". They're in there, alright.

Fri. 9/19: Dad and I had our last two fishing days lined up and we had guides reserved who would flat us down the Snake River. Friday we would float from South Park, just south of Jackson, to Dog Creek, 12 miles downstream. This day would be my most frustrating of the trip. These cutties, as I said above, are wicked slow takers on the dry. Really, reaaallllllyyy ssssslllllllooowwwwwww. I bet I missed 30 fish this day, all on the dry fly. When we stopped for lunch, I got a chance to present a dry fly to a ton of small fish, and I kid you not, you would have to wait until the fish had grabbed the fly, turned and headed half way down to the bottom before you could set the hook. This was combined with my first float trip ever. Line management is the single most difficult task while fishing with dries this way, and I had much to learn. Cast, big mend, mend, mend, cast, mend, cast, mend, mend, hit, miss. Cast, mend, hit, miss. Cast, mend, mend, mend, cast, mend, mend, hit, miss. That's the way it went for me for most of the day. Because you are floating at the speed of the river, structure and holes come and pass as quick as you can see em and if you're not ready to cast, or if you've got too much line out, you're fucked. You're also fucked if you've missed 20 strikes and you've begun cursing. I brought 6 cutties to the net, 6 - 12", breaking off a real nice one, and losing another nicer fish. Dad had a pretty good day, landing several 16+" cutties. The one below had a scar on his gill plate. 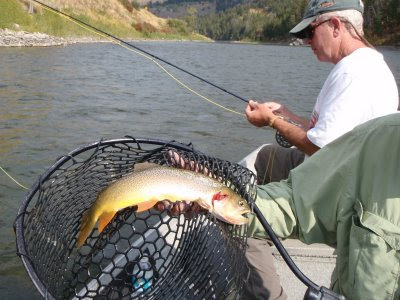 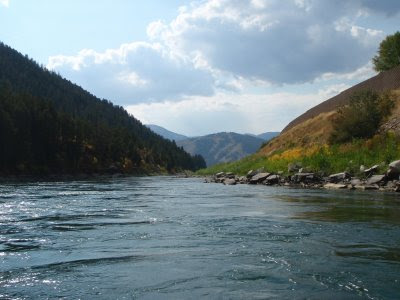 Sat. 9/20: Our last day would be another float trip. This time on the South Fork of the Snake, from Palisades Dam another dozen-ish miles downstream to the Spring Creek bridge in Idaho. Our guide Will was much more enthusiastic than our guide the day before and was constantly talking to us, telling us to mend or re-cast for most of the day, which was exactly what we (or at least I) needed. We nymphed the majority of the day and picked up a good number of whitefish, but also had some solid hookups. Dad started the day off nicely with a 16" rainbow and I put a smaller cutty that I foul hooked while nymping in the boat. At the first spot we got out and wade fished a run, I saw the indicator drop and set the hook. A second later a monster rainbow exited the water and showed us his brilliant colors. He would leap 5 or 6 times, while I struggled to walk backwards into slower, shallower water and Will ran downstream with the net. After the fish had stopped leaping and was slowly coming to the net, the hook popped out. I was in disbelief. Chalk that one up as another fish I didn't land that I'll never forget. Damn. 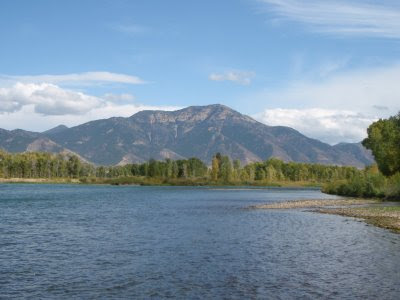 Fishing was slower after this action. We nymphed to lunch and afterwards as well. Some more whiteys were dredged and then our first weather came upon us. Hard rain and wind were struck upon us and then eventually lightning. A Rapid River like storm, Wilkie. We beached the boat and took to the woods to wait out the lightning. I thought to myself about the fish I had lost and the trip. I needed a cutthroat. To finish the trip off right and make up for my shit ass showing the previous day. The weather was not helping this happen. 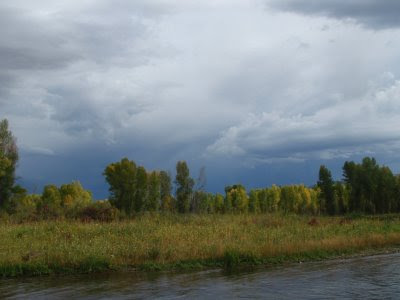 Soon, the storm passed and we were in blue skies. Temps rose just enough to get some bugs moving. I put on a chernobyl-hopper pattern and fished the small holes next to the bank as we floated on. Not five minutes with the dry fly on did I put it in one such hole and then a good cutty came out and took it. My set was true this time I felt the solid hookup. The battle continued as we floated downstream. A rock with branches stacked up behind it came upon me and I sent the fish around the far side of the obstacle, then back through the slower water behind the rock. Obstacle avoided. Soon, the boat was beached and the cutty brought to the net. This was my fish. I was satisfied. Poseidon giveth. 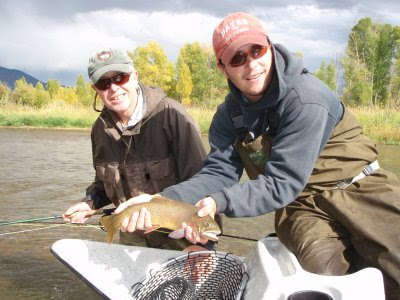 We finished the night at some bars in town and the next morning we departed. Morrell, I didn't get to fish that creek you mentioned, but our guide Will confirmed its status as a serious destination. Next time. 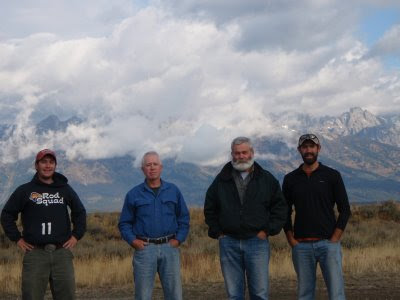 Great post Jesse and some solid scenery as well. We should think about doing a group trip out west this spring.

we should perhaps do more than think about it. the amount of available water around jackson is incredible. west yellowstone, the same.

Awesome Jesse. Just awesome. Is the section of Flat Creek you fished in the elk refuge? I had a similar experience with mixed results but a few decent cutthroats there too.

My ex-girlfriend left her parents place in Massachusetts this morning and is on the road moving out to Jackson as we speak so a spring trip out there for me might be in the cards for me too. Good solid fishing man.

i have only caught 3 trout in my day, but this summer has been filled with trout fishing for stripers. the ocean is filled with rivers.

those ever flowing rivers of yours look mighty tasty! current. Mmmmmmmm.

i have a distinct memory, and i believe wilkie does as well, of sitting on the snow covered bank of a little river near bates and watching you put on a nice little show. a couple of snags in a row, lost flies and that was it. the rod was hurled to the ground in disgust as you began your enraged pacing. fucking shit, goddamn mother fucker piece of fucking crap good god fuck shit ass!!!!

rivers are such serene and peaceful places, aren't they.

solid Jesse. I didn't even have to read the caption to recognize Flat Creek...spent many a day there in the Refuge. very jealous. hope you were able to make it to Cowboy Bar in celebration.