adventures with other fishermen 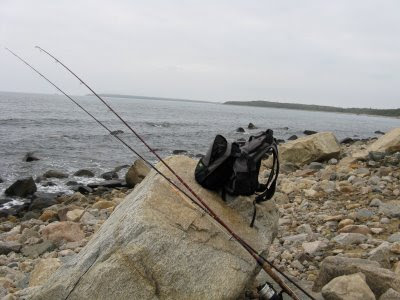 the other day i had the opportunity to fish with some very talented fishermen.
for about a month and a half, during the end of july through august and into september, i spent nearly every night out fishing, most nights watching the sun rise. the ocean an amazing place filled with many differnt fishing spots. there is a wonderful diversity of habitats, each holding fish in a different manner, their respective actions based on various local fauna, structure, depth, exposure to current, location with respect to the wind and an infinite number of other influences. during these jaunts i would spent a good deal of time sitting the beach, watching, listening to, mulling over and eventually learning about the waters and their inhabitants. a good deal of time was also spent with my line on the water and my flies in it, searching, probing and picking apart the offerings of the ocean. the more time i spent out there the more it revealed to me. tides and currents wear many different faces. at first there were a few small bass, then more and larger. my exploring has fed myself and others and at one point led me to a fish i could not move with my fly rod.
most of the time i have places to myself, but sometimes there are visitors. one such night brought two strangers. they came in kayaks, dressed in black and camo wet suits and brandishing lamiglas surf casting rods furnished with van staal reels. their headlamps shown red. at first i thought the spot was being invaded by navy seals. seals they were not, but serious fishermen they were, having traveled from rhode island to fish. after sunrise we spoke for a bit. a number of years ago they had been shown this spot by a good friend of mine, scott gates, and been savoring its offerings ever since. a few times a season they travel and fish. knowing that they would be intrigued i invited them to join me for some time on the island of pasque. they showed interest, and followed through on it a number of days later.
each year my family spends a week on pasque. the second of the elizabeth islands, it helps create quicks and robinsons holes, both renowned fishing spots. it is a private island, off limit to those not currently staying there. for these two die hards this was an opportunity to fish otherwise untouchable shoreline. (it should be duly noted that our beloved and stalwart wilkie has in fact released on this island the wrath of a hungover and painfully unsettled system of bowels far too turbid for any kind of deal to be struck. he returned missing several strips of fabric from his boxers but revived by whatever the island lent him) the fishermen arrived at midnight and save a half hour nap fished straight until eight the next night.
they arrived several hours later than planned, so thinking they would not make it i set out fishing for the night and did not see them land. they took off around heading north west around the island, slinging live and rigged eels into promising waters.
around noon the next day i awoke to strange voices outside. they had in fact come! and they wanted more. i sucked down a mug of coffee while donning my waders, preparing my pack and gathering my rods. their night had been tremendous, landing bass up to 37 pounds on their trek around one half of the island. a path had taken them back to the house and provided them with ground on which they had dozed for half an hour. a timely boat ride ferried us around to the north side of quicks' hole. then we began to fish.
it was quite amazing watching these people fish. they had long surfcasting rods capable of tossing their enormous lures hundreds of feet out to sea. throughout the day earl and i spend a good deal of time talking and watching. rob fished. nonestop. if his plug was not in the water he was moving to another spot from which to cast, probing here and there and everywhere with his huge white floating rattling and dancing jumbo commotion. he did not change lures very often. he would toss this or that every once in a while, but for the most part he threw his white thing. and man could he make that thing groove. rob was entered in an "on the water" shore derby which had been going on since march. shore from new jersey to maine were fair waters and the 21 of september saw the close of this contest. for most of the season he had been leading the derby until a few days prior to their arrival he had been overtaken by another fisherman. he needed to catch a 44 pounder in order to heft his five fish total back on top. he had come to pasque with a mission on his hands. 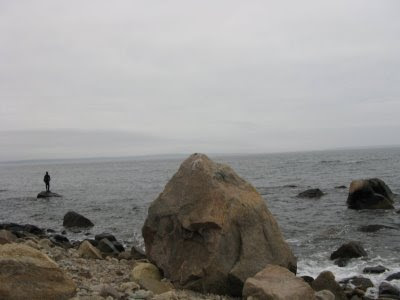 (this fish would not be caught on the island of pasque. but it should also be noted that while writing this, i recieved a call from earl telling of their previous nights' outing, in which rob leapt ahead in the standings by catching a personal best 50 pound bass and he earl had landed his own personal best, at 42 pounds) 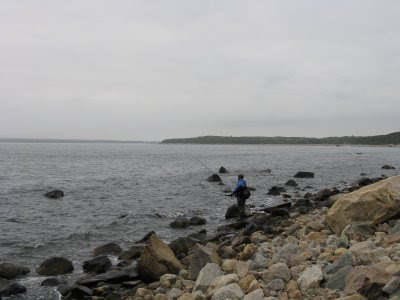 we spent the day working our way around the island, dropping south and eventually east back to the main house. earl had his good friend corey on the phone, a guy out of the salt water edge who is an experienced and celebrated guide and who knows these waters to the last detail. this is where and when the big fish will come around. be there. so we were. there were some boats milling around in these spots, some catching bass and some not. a boat released what rob said to be a high thirties bass, turning away from its neighbors and only letting the head of this monster break the surface. fishermen like to cover their footprints when surrounded by competition. strange obsessive creatures. we continued to move on, making way for the southern point of the island, an area whose waters promised to hold tremendous potential.

rob did all the catching that day. he released a number of bass, none to qualify as "a fish" in the minds of these fishermen but alive, hungry and full of exitement none the less. much of the time while rob caught, earl and i sat and watched him do something he does very well. this was the most rewarding part of the adventure for me. for a brief time i was playing in the majors, surrounded by and thus exposed to folks who play the game at a very high level. and they loved this game they were playing. to them it was pure bliss. earl was infatuated with the beauty of the island. he and rob were both taken by the fact that they couldn't concieve of "fishier water". anything could come from them. but no matter what the outcome of an outing, these folks found enjoyment in the act of fishing.

i did not catch any fish this day. over the course of our travels i tossed my needle fish into the ocean a good number of times but i was not unhappy when it came back to me with no fish attached to its treble hooks. i was among good company, folks from whom i could learn much by simple observation and general exposure to their presence. and i did.

darkness found us back at the main house, having treked a several miles over boulder strewn shoreline and through the fishiest of waters. we returned to hot coffee, warm fish stew and a handful of tipsy grown ups. they wanted to hear of our adventures, and we told them, but 20 hours of hard traveling and fish catching had finally caught up with our guests. they were both asleep on couches when their ride arrived.

rob and earl departed pasque with many thanks for this opportunity and invitations of newport fishing adventures. and then they left. but not before providing me with a 12 inch sluggo "which should come in handy when you continue your fishing later on tonight..."
Posted by pete at 5:35 PM

Pete, good to hear from you my friend. I am quite familiar with this island, not only from my trip ashore, but for the great fish that we have caught over the years along it's shore. Great story!

great post, good sir. it is very nice to see your words here.

it's amazing how much you can learn just by watching other people fish. i have no doubt that you fueled these guys' fire as well as them fueling yours.

finally getting caught up with emails and the blogs and such. gotta read up on anglerism now...