The day began like many of my other excursions with but a few exceptions. Exception #1 :I was supposed to be guiding a full day on the upper Kennebec River but an early morning call to the flow phone changed the plan; flows would be high early (8400 cfs) and wouldn't come down until 1 p.m. A quick phone call was made to the client, we would switch up to a half day trip and meet in the Forks at 1 p.m...done. Exception #2 : I called Garth (a photographer/flyfishing friend) and convinced him to fish the morning with me on Austin Stream and then, if time allowed, Cold Stream (all in the upper Kennebec watershed).....done. Exception #3: Monday I had sucessfully cut the tips of my right middle finger and pinky off with a table saw; heavily bandaged I would forge forth with three capable fingers on my casting hand. We arrived at Austin Stream, mile 6, by 6:30 a.m; and so the fishing began.

Things began well, the first two hours of fishing produced 6 brookies around 12", 5 salmon between 10 and 14", and one rainbow around 12". If you've never fished Austin Stream, its a true pleasure, holding water around 60F all summer long. We were stoked to have had such luck but had just about fished all of the major pools around mile 6 when we nearly simultaneouly landed two identical fish.....two 18" Splake? or Brookies? we're leaning toward splake, but originally thought brookies as we never have seen a splake this far upstream from the Kennebec River. The stream is small and these fish are beasts to be coming out of such water....great start to the day. 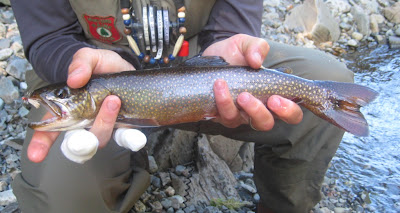 With no legit pools to fish we decided to move on toward Cold Stream, a place where I personally have never fished, and Garth had been skunked at this time two years ago and never had returned. We picked our way in from the west and met several dead end tote roads. The GPS suggested we would have to hoof it as there are no roads that come directly to the stream. The water was 0.3 miles through the woods but sat some 500 feet vertically below where the car was parked; we couldn't get any closer with the vehicle so we would have to bite the bullet. Bushwhacking vertically downward ensued. 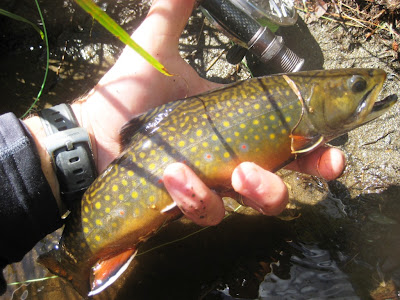 Promptly we began getting into the Brookies with Stimulators and other dries, however their size was not that impressive (+/- 1o"fish). I decided that buggers were in order so I tied on a green crystal bugger with a beadhead. Two casts in the first good pool and I had the above pictured Brookie; a colorful 14-15" specimen. 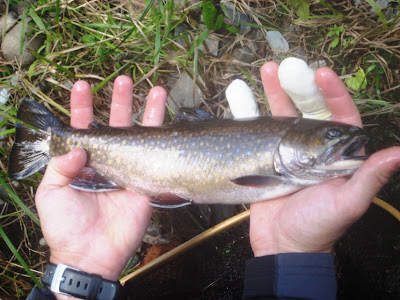 Intrigued by the increased size of the fish that the bugger produced, we began dredging every pool we came to with black and green crystal buggers..... 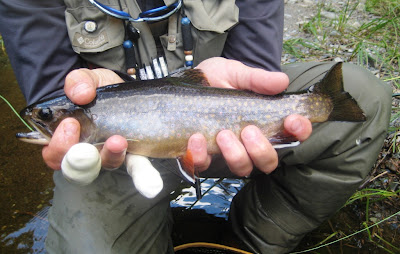 Again and again we hooked up with increasingly larger trout as we moved closer to the confluence with the Kennebec...... 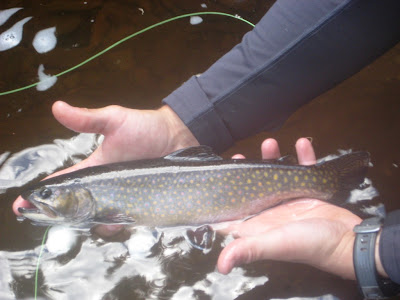 After fishing several nice deep runs/pools and catching what we believed to be our fill of trout up to 17" we headed downstream in search of the confluence with the Kennebec River. After a half mile hike we came to the mother of all pools tucked against a nice cliff with a massive Gibraltar esque rock in the middle near the tail of the pool.....our day had just begun

The fish became larger and even more frequent.....the seemingly impossible was just that.....possible. 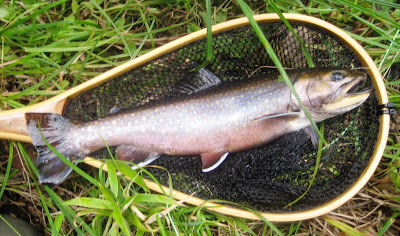 From THIS pool we plucked 20+ Brook Trout over 16" and up to 19"......flabberghasted we fished on.....I jokingingly commented to Garth, "are we in fucking Labrador?" 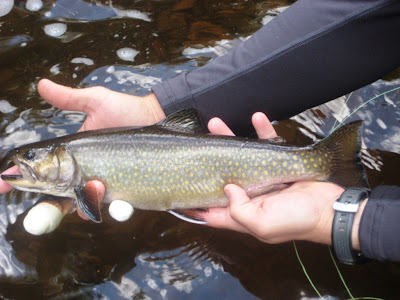 and the big fish continued to come...... 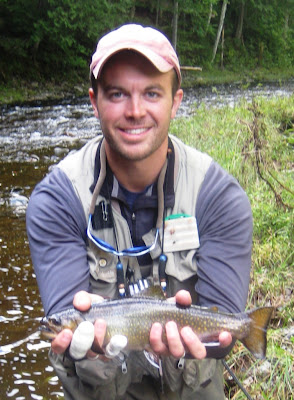 50+ Brook Trout (between the two of us) were brought to net between 6:30 a.m and 12:30 p.m, a seemingly insurmountable quantity of fish. Over 30 of these fish (and we counted) were 16"+. I have no reason to make such a rediculous claim. I do not desire to be considered the greatest fisherman on this blog. As I drove home tonight I thought about this phenomenal day; I considered what it is that makes a day that one would consider the greatest day of fishing of their life. The largest fish you've ever landed of a particular fish species that you covet would be up there on the list. A day when the weather, the quality of the fishing, and the caliber of the fishing companionship were top notch would be up for nomination for sure. This day was none of those. I've caught larger Brook Trout and I'm sure I've been a part of a fishing crew that netted more than 50 trout in a day. I've had days when friendships and fantastic weather combined with quality fishing, but still I would not rank those days as the best fishing day of my life. This day, the day in late August when all other waters in the area were at or above 70F, when the flow of the Kennebec River deemed that I should change my trip to a half day, when I landed more large Brook Trout in a single fishing session than I have ever done before in my life.......this day I shall now consider the best day of fishing of my life........for now 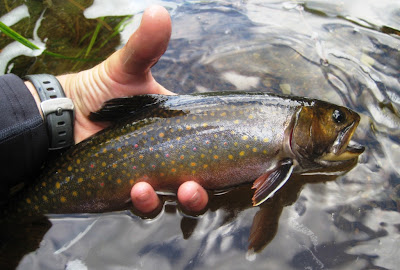 Posted by Andrew Wilkie at 7:39 PM

Good F***ing lord. 30 brookies over 16"? I shall worship the land upon which your Godly feet descend. Speechless.

HOLY FUCK. Wow. Do you think the fish could have packed up into there so thickly in an attempt to get relief from the unusually high 8400 cfs flow? Unbelievable and amazing. Well done...here's the kicker, you'll like this. I fished the Nezinscot today for 2 hours before dusk and caught one 4 inch chub and one 2 3/4" chub...

Apparently the table saw gods have forgiven you. Wow.

i don't believe it

HA! A comment like that will have people really thinking you don't believe it. I look forward to your post recapping yesterday's outing so that we can put any real doubts from others to rest.