I have to preface this post with a warning: I went to Bowdoin, not Bates. I am also not in the same league of fishermen as Keith, Jake, etc…Before I went fishing with Keith, my crowning fishing achievements were 1) catching a tagged striper which I got $10 for returning the tag and 2) catching a flounder with a 10 inch Twizzler (the licorice).

Keith had taken me out 2 weekends earlier on my first offshore trip; a trip that can only be described as the best 24 hours of my life. I met up with Keith again on the 4th of July out on L’hommedieu (meeting up with people in the middle of the water is much cooler than meeting them on land). We decided we would try to catch some scup and liveline them off the shoal before the 4th of July fireworks went off. This plan was pretty much abandoned after catching

20 scup the size of an iPod. We then headed into the harbor to pick up a man known as “the Docta.” He jumped onboard carrying a bag of Coors Original, banquet beers…Coors heavy if you will…a man’s beer…I figured we would get along. After a night of watching fireworks, sipping out of golden cans, and trying to get Offshore Investments II under the Great Pond bridge, we racked out at my place on Great Pond around 23:30 dreams of tuna dancing in our heads.

We woke up at 2:50am and met up with Jake, who, unlike the docta, was actually in the medical field. We hopped on the boat, crawled out of the no wake zone in Waqoit, then cruised east. I am not sure when the sun came up, because we couldn’t see a damn thing, but I think we made good time, passing some larger boats en route. We headed towards our waypoints, but the fish weren’t there to greet us. After puttin around in ¼ mile visibility for a few hours and seeing limited signs of life, we ran into an oasis of birds working over boiling water. The splashes were not exactly tuna-sized, and once we got closer we realized that the fish were large stripers in the 20 pound range. I cast into the frenzy and on the 3rd cast a nice fish (probably the largest striper I have ever caught) inhaled the wooden popper. I was surprised at how easily I hauled it in with Keith’s diesel spinning outfit which was equipped to handle tuna. The amount of keeper-sized bass in the area was described as “annoying,” as we assumed we would have to keep peeling them off the squid bars. If we had had a tuna in the box, we could have had an epic session playing with some large bass on the surface, but we needed to get what we came for…tuna.

We continued trolling along with the squid bars, when an outrigger snapped off…but a striper was on the other end of the line…still no tuna. We continued fishing and then it happened. The screaming Tiagra let us know for sure that we didn’t have an annoying striper on the end of the black rig…TUNA! Jake, who has caught several giants before (a good guy to have on board) worked the fish onboard like a salty vet. After a surgical gaff-job by the medical professionals, we had our first tuna onboard. The pressure was off, and the Skoa

l was back in.


A must have for every tacklebox

The adrenaline was flowing after another knockdown on the pink. Shortly thereafter we crossed directly over our final waypoint, BOOM, another tuna takes down the green bar with the same force that I devoured my late night pizza on Friday at 230am.

I had the honors of reeling in this beast, and the tuna reminded me why I need to work out after college. After a legitimate battle, the men on board executed a clean release of the fish, which also appeared to be in the 100+ range. After a blurry afternoon that included a fruitless pit stop at a striper spot off Monomoy, we headed home.

We arrived to Waqoit Bay as heroes, passing many amateurish-looking people on the way in. We looked very professional in our foul weather gear and a boat full of offshore gear (and most importantly, a bluefin in the fish box). 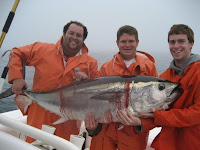 GQ said orange is in this summer

When I got back to my house, I was starting to feel like getting bleepfaced with some high school buddies at Hennessey’s on Thursday night and getting 5 hours of drunken sleep before the 2.5 hours on Friday night wasn’t such a great idea. It was starting to catch up to me in a big way. Apparently I fell asleep upstairs with the lights on at 4:45pm and woke up 9:45am the next day, sleeping through both dinner and breakfast, which is a personal record and I am sure close to a regional record.

Tuna fishing with Keith brought me to a different world; a world where 25 pound stripers were “annoying.” This was a new world to me, as I still freak out when I see schoolies boiling on the surface. I feel privileged that in two trips I have been able to learn trade secrets that have taken some fishermen decades to learn (I never would have guessed that chewless tobacco attracts fish). I need to start taking notes. However, I am back into fishing mode again, and now that Keith has introduced me to a wealth of online fishing resources, I will undoubtedly keep procrastinating at work, preparing for another weekend on the water.
Posted by Sam at 5:57 PM

I read this out loud to The Docta as we are drinking the leftover beers from our trip and sweating in my living room. (Colin Ferrel and Jaimie Foxx in "Miami Vice" are only adding to the temperature induced perspiration...) I must say, another excellent first post, and a privilege to have you on board as an honorary BFC member!!!!

Great post Sam and welcome. Keith is a great guide and he will show you how to really handle a rod.