The plan was simple: hike into Aziscohos Pond with a couple float tubes and fins, our rods and vests, a tent, a couple camp stoves and food, a bottle of Beam and slay some brookies. Aziscohos Pond is found due west of Mooselookmeguntic and Upper Richardson Lakes. The pond itself doesn't have a road access, but a mile-and-a-half long trail will take any willing angler to it. Wilkie and I were they.
We reached the trailhead at 8 pm, secured our tubes and whatnot to our packs and began the hike in. The trail turned out to be much better than what we thought it would look like, as the Gazeteer didn't show any trail in, just an outlet stream from the pond. Though our packs were heavy, we were excited and we cruised the trail, reaching the pond in just under a half hour. We were greeted by a few scattered rises and an empty pond. 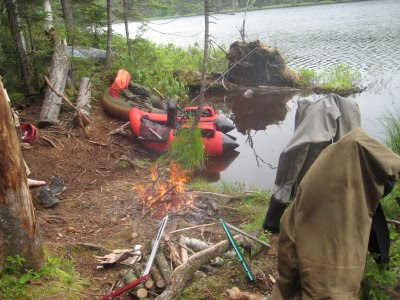 The tent went up, and we gathered some wood for an evening fire. The tin and the bottle were opened, and we were satisfied. We hit the sack prepared for the epic day ahead. 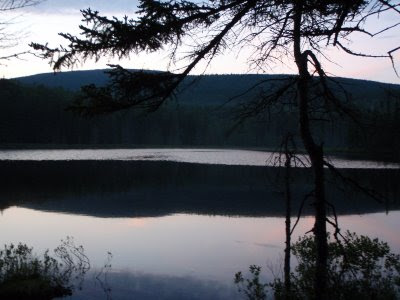 5 am came soon and we awoke to a completely fogged-in pond; not exactly what we were hoping for. The rods were rigged up, waders and fins on, and we slipped into our float tubes and hit the pond.

Action came quickly as Wilkie lost one on a Woodville Special and I picked up a 12" brookie on an olive Bugger in the first half hour on the pond. Another half hour passed before Wilkie hooked up and I did again soon thereafter. When we came in to get breakfast going, we had landed a half dozen brookies between the two of us. The Skoal seemed to please Poseidon, for not long after we brought out the tin did a couple more hookups follow.

As the day passed, the elements began to test our gear and our patience. Slight wind and on-and-off rain was the weather for the rest of the day, and it made fishing in our float tubes a bit difficult. The fish cooperated though, and we both managed to get strikes for most of the day. In total, about a dozen fiesty brook trout were brought to the tubes. In the one half-hour with no wind and no rain, the pond glass-ed over and we saw about 5 rises. The fish were hungry and ready for a hatch, but the pieces just never fit together.

The float tube I was using kept my ass a good 3 inches under the water all day. The old, leaky waders I brought ensured that the clothing I put on underneath would be saturated in due time, and this in turn kept my body nicely chilled all day long. This lead to a nasty cough and congestion that soon turned into a cold. Snot rockets provided only short term relief, and it wasn't long before I was quite stuffed up.

As the sun went down, the rain came up. We set up another tent fly to stay dry and this worked well enough for us to work on the bottle and get a nice dinner in. By the time we decided to hit the sack, it had been raining for a couple hours, and it was then that we realized we had some issues to deal with.

The tent we had brought was seriously lacking in the waterproof arena. Its fly was so wet and heavy that it was stuck to the actual tent, such that the tent itself was soaked. Water had been dripping freely onto our sleeping bags for hours. When I got into mine, it was wet up to my mid-section. My sleeping pad was half deflated and also soaking wet. It was going to be a long night.

I awoke only two hours later to pitch dark and torrential rain. It was so loud that all we could do was lay there, listen to it pour, feel the water dripping onto our sleeping bags, and hope to fall asleep soon. We were both in and out of sleep all night. I could feel the water seeping up my sleeping bag towards my chest all night, and every time I moved, I would squish into more cold water. My congestion didn't react positively to this sleeping environment, and I was forced to sacrifice a t-shirt to blow my nose several times in the middle of the night.

Finally morning came and it was still raining. I got out of the tent and into my last remaining dry bottoms, my Rod Squad sweats as soon as I could. I sat under our tarp cross-legged with a scowl on my face, snot rocketing the early morning away, while Wilkie got a few more minutes of sleep. Soon he arose, but was in very poor shape as well. A head splitting migraine had taken over in the night and left him in severe pain in the morning rain. Drinking water didn't help, but instead caused vomiting. We were a sore sight.

After a slow packup in the rain and an even slower hike out, we reached the truck and were on our way home. At the first gas station we came to, we purchased orange juice, ginger ale, water, Tylenol Cold & Sinus, Advil and Ricolas.

We limped back to New Sharon slowly, and it was there that we were finally able to laugh about the trip and realize that it was, as always, worth it all.

"Suco de Tangerina" by The Beastie Boys
Posted by Jesse Lance Robbins at 7:27 AM

Dudes sounds like a crazy trip. As I always say, "Poseidon giveth, and Poseidon taketh away."

I'll be purchasing my very first ever tin of skoal apple blend for this weekend. Ye ha!