The Man of the Blog: Jesse Lance Robbins 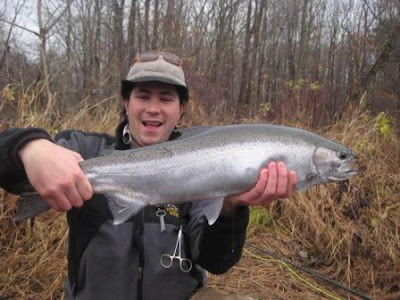 I used to dismiss the numerous artistic depictions of fresh water fly-fishing as meaningless yuppie propaganda; a post-Robert Redford fad. Still, as I stood on the edge of the Salmon River watching Jesse fish, I couldn’t help but fully accept fresh water fly-fishing as a form of poetry. Each cast and drift represents a verse; each verse is rhythmically in tune with the water being fished, with the crescendo of a take representing the sweet culmination of the perfect verse at the perfect time. Considering this analogy, Jesse Lance Robbins is a master poet.

On that day, I watched Jesse fish a steelhead run for hours without a touch, the length of his poem growing to marathon proportions, the shallow riffle ahead of him an aquatic version of Eliot’s “The Wasteland” without the crashing irony. When the time came to leave, Jesse continued to cast undeterred. He remained focused, throwing his fly, mending his line, ever vigilant for the slightest indication that his perfect verse had persuaded his invisible quarry below. The “lines in” call is always more difficult to shoulder when the angler’s goal has not yet been achieved. Jesse turned to me as we left the river’s edge and asked if there was something that he should have done differently, but I was in no position to offer advice. You see, Jesse Robbins is arguably the best freshwater fly-fishermen I know, and I know quite a talented few. I had a feeling that Jesse’s epic was not yet over, that the day’s inconsequential verses were somehow a deliberate foundation for an exhilarating finale.

The next day found Jesse knee deep in the Salmon River at dawn. The light of morning peaking through the surrounding evergreens, illuminating golden rays of mist, provided the perfect backdrop for the conclusion of his composition. Shortly thereafter, the perfect verse was written at the perfect time, and Jesse found his steele. As he held his fish in the shallow waters of the Salmon, the feeling of accomplishment was palpable. The best poets always come up with the best endings.
You rock bro. Thanks for making the BFC what it is today.
Keith 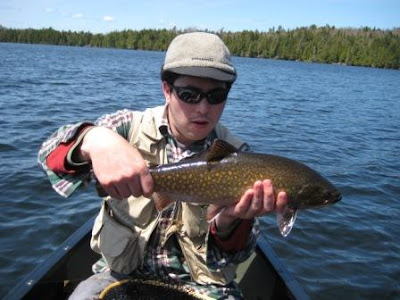 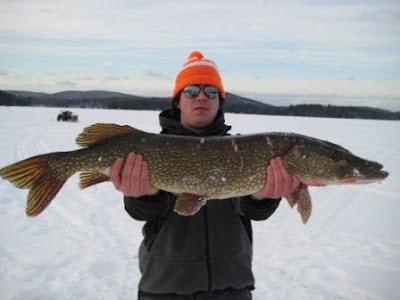 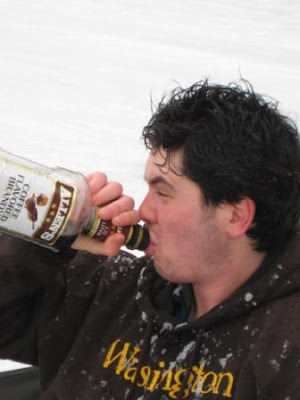 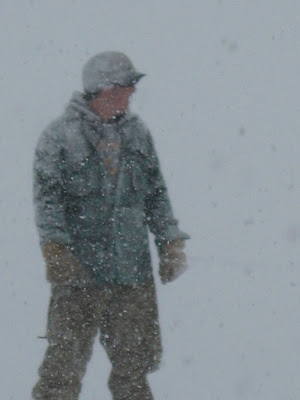 Name: Jesse Lance Robbins
aka: Old Man Rivers; Throbbins; Port Steele; Jessnuts
Born: Belfast, Maine
Raised: Searsmont, Maine
Currently Resides: Portland, Maine
Bates Class: 2006
Major: Economics, Mathematics
BFC: Bassmaster, 2003 - 2004; 2005 - 2006
Preferred Fish Species: Brook Trout, salmonids
Favorite Flies / Lures: Woody, Copper John, Buggers, 'Chute Adams, Black Wulff, smally poppers
Home Water: St. George River
Quote: "Many men go fishing all their lives without knwoing it is not fish they are after." - Thoreau
"If, as I suspect, trout fishing is something of a disease, then it is also something of a therapy in itself." - Tom Sutcliffe
Thoughts: Fishing problems abound. Every riffle, run, pool, pond, shelf, bend is a problem with one or more solutions to hooking the fish that lie therein. Sometimes a solution is visible, as in hatching bugs. Sometimes it takes twenty different offerings, four different presentations of each to get a solution. Sometimes the first cast solves the problem. Sometimes the problem is left unsolved. Sometimes there are no fish there.

I met Jesse on a cold winter's eve in January 2003. It was the year after I had graduated from Bates, but when Keith called and said "Wilkie, we'll be on the Kennebec River in shacks x, y, and z, I quickly made arrangements to join the crew for a night of debauchery. Keith brought scores of freshman who boasted interest in the BFC. I met Robbins, our connection was brief, I was drunk, he was small, yet a subliminal recognition had been made. Fastforward to the summer of '05, Keith invites me to the cape to slay striped bass on his then "large" 23 ft. center-console Cobia. I, being the easily swayed, albeit poor fisherman that I was, ended up at chez Lane in search of the mighty Striped Bass. I knew that Keith would be bringing a BFC prospect, a young man that I knew nothing of except for what Lane imparted upon me. "He's a great fisherman Wilkie, a Maine man of the fly, a fisherman not unlike yourself" Lane would tell me. With an BFC alumni purpose in mind, I set foot in Keith's place, shook hands with Lane and then with Robbins.....it would be the first of many fishing greetings we would exchange over the coming years......side note, we slayed multiple 30lb. Stripers on this outing.......the friendship was sealed.

Over the years Robbins and I, based on our close proximity to one another here in Maine, have found our way to the water on dozens of occaisons. Our brotherhood is one revolving around the Landlocked Salmon and native Brook Trout of our home here in Maine. We are both only children, two charachters who received the sole attention of our parents, parents who loved the outdoors, parents who injected fishing into our lifestyles. Our folks both graduated in 1972, share similar University of Maine ties, and settled in small peacefull towns where the simplicity of life took centerstage. I have come to know Jesse's family, most notably his father and his father's friends through our fishing excursions with one another. In his father I see my own, a passionate outdoorsman with a slightly wild side and a love for his son.

Without a doubt Jesse represents my calm even keeled side. I have been know to have a slightly wild streak, am often hot tempered, and have been know to raise more hell than I probably should. While Robbins has been known to have similar qualities, they are qualities he puts forth after a deep breath and often with some serious forethought. I've never seen him angry on even the worst day of fishing even though I can read him like a book and know that he is pissed. These are qualities that I am sure that I will never possess no matter how hard I try, yet I know we will be fishing brothers until the day that we die. I am Jesse's John Mitton........

p.s - Robbins' line control in the air is possibly the most beautiful thing I have ever witnessed; he casts exactly like his father.

Wilkie
jesse lance robbins assumed the being of "Old Man Rivers" one strange yet memorable afternoon while dubbing around on the beaches of the NC outer banks. that afternoon it came to me, and i in turn came to know jesse to be Old Man Rivers. it is too fitting. jesse lance robbins is old man rivers. why is he old man rivers? well, because once you get to know jesse lance robbins it becomes blatantly obvious, at least to me, that he is Old Man Rivers. that is what he is. old man rivers. in ten years it will be even more obvious why he is old man rivers. believe me.
but before he was old man rivers, jesse lance robbins taught me how to fly fish. of this i am and most likely will be forever grateful. we stood by the puddle, on the parking lot side, and i watched in amazement as he effortlessly infused this bouyant and funny colored line with more and more energy before placing a good deal of it delicately and in a perfectly straight line atop the water. oh it looked so easy. it wasn't. but he was a patient teacher who wanted his pupil to learn and he eventually realized this for and with me. thank you jesse. we have since thrown line together on numerous occasions, sometimes hooking fish, sometimes landing them, sometimes losing them and sometimes practicing our casting for hours on end. whatever the outcome it has always been a pleasure to share an experience with this delightful individual.
another amazing quality of old man rivers is his innate generosity. what and when he has and other have not he is always willing to share for the overall enjoyment of the experience. he has worked the floor of the fishing outfitters and paced between the close walls of a cubicle. i have seen him probe the nature of his being, watched him disgustedly throw his rod to the still snow covered river bank and stew over the feeling of an instantly broken off ~40" striper, but never ever does he taint the feeling of a comunal adventure or experience with the current state of his person. as brother wilkie duly noted, no matter his current state of mind old man rivers he will never drag others down. he has been known to lift them up, however. i look forward to when i have and jesse has not, and i am able to return a piece of all that he has given me.
jesse also has a keen desire to adventure. throw it all to the winds. let loose ones seeming control over a situation and ride out whatever may show its face. towards where or how and when or for whatever reason why...such things are details to bath in, not dictate to, and this jesse knows.
old man rives has tasted the freedom of the water, and it tickles his fancy.
thank you for being, Old Man Rivers.
pete
Posted by Keith at 10:46 PM

Email ThisBlogThis!Share to TwitterShare to FacebookShare to Pinterest
Labels: Profiles

fuckin a. i think you both must've been drunk when you wrote those to write such things. tootin' my horn, you bastards.

the only other thing i can add is that i wouldn't be anywhere near the angler today were if not for you two fools.

This was like half eulogy, half Penthouse Forum.
I didn't know whether to cry or jack it, which is the sign of great writing.

I have no idea who nick is, but he is right on with this one.

i can't seem to get my blurb to stop encroaching on wilkie's jesse lance robbins reflection. my apologies! im sure he nor the old man will care too much. go get them steehehead men.

"in ten years it will be even more obvious why he is old man rivers. believe me."

oh, it will, and most likely on more levels than the one that popped into your little noggin there!